Unicorns and dragons have become so ubiquitous that some argue investing in these companies is the only way for VCs to survive. This phenomenon makes for excellent entertainment, and for some either incredibly lucky or prophetic investors, there are billions of dollars to be made. But at what cost to entrepreneurs?

The term ‘private IPO,’ increasingly used when a company raises very large late-stage funding, is a misnomer and usually signals an impending path of sequentially larger rounds of funding, rather than a final influx of capital before reaching sustainability. Since late-stage private investment typically functions as an auction, where the highest offer writes the check, the accompanying valuations are almost guaranteed to be inflated beyond a public market equilibrium and are typically close to the maximum the most aggressive investor in the market will pay.

Many unicorns and dragons are caught in a cycle of increasing round sizes and burn rates – and while ‘investing in growth’ is necessary, burning through funding to grow quickly at scale leads entrepreneurs to take more money, which can serve to fuel even higher burn rates and potentially unsustainable growth. These companies with over-inflated valuations will find the fairytale ends when they attempt to go public. Raising money from flush VCs and growth equity firms is nothing compared to satisfying the public market — where you have to provide a credible path to sustainability.

Since 2005, total capital raised by growth VCs has remained relatively flat, but the number of funds has actually decreased — possibly due to post-recession risk-aversion from limited partners — the foundations, endowments, pension funds, and other asset managers that account for the majority of capital in venture funds. The same amount of capital invested into fewer funds, unsurprisingly, has led to an increase in fund size. 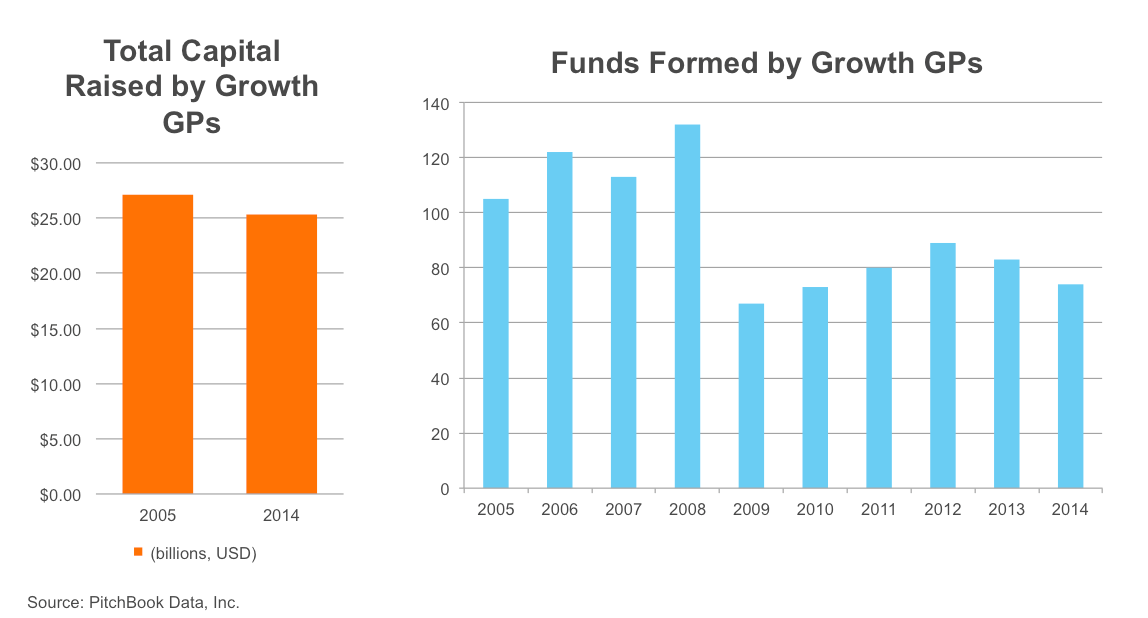 With larger funds, VCs need to make larger individual investments in order for any one of their investments to drive outsized returns for the fund as a whole. VCs tend to focus on the strategies – sectors and stages – that made them successful in the first place. 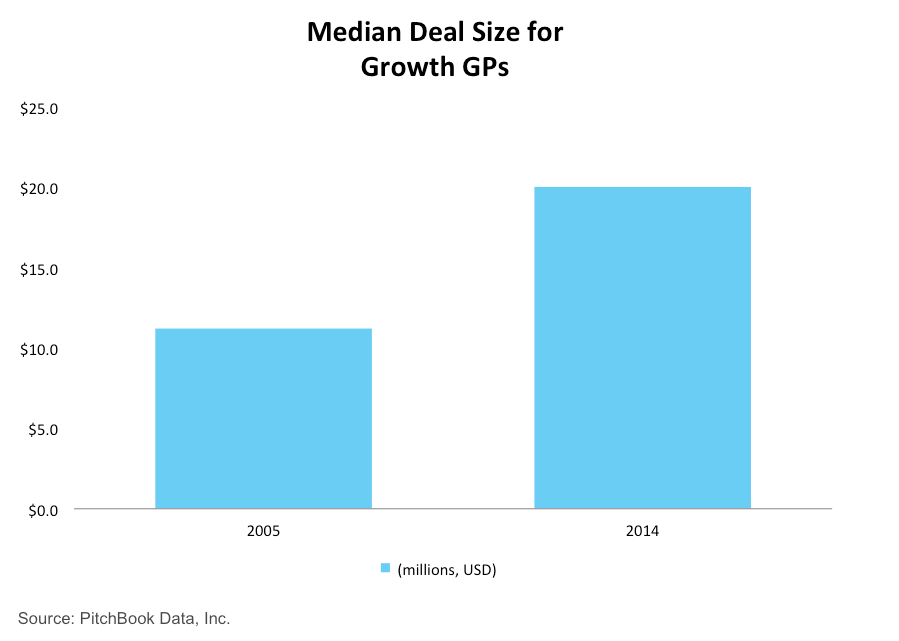 The need to invest more capital in similar scale companies has led to higher valuations, which lead to larger investments, ultimately putting pressure on entrepreneurs to grow their companies more quickly, which in turn can lead to higher burn rates. And the cycle perpetuates. 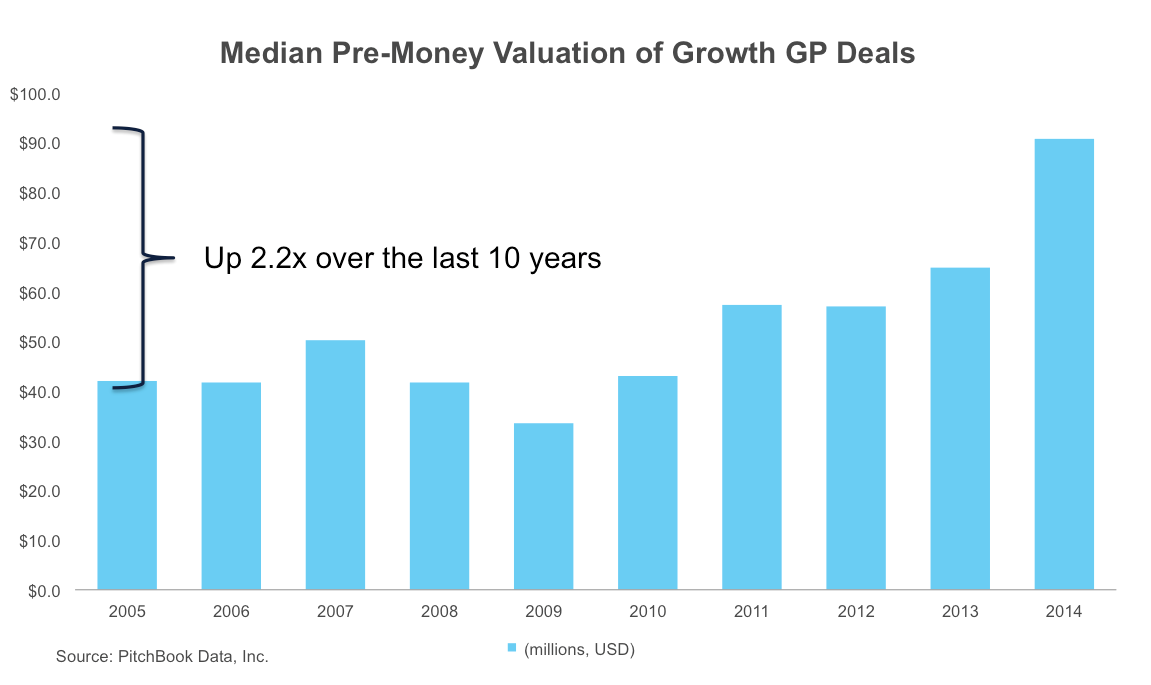 But you won’t hear much complaint over increased fund sizes from VCs, LPs or entrepreneurs. Larger funds bring with them many benefits for all parties involved (at least in the short-term). VCs earn higher management fees off of larger funds, meaning they can spend more to hire talent, ultimately making them more competitive — crucial in today’s landscape. Entrepreneurs can raise more money, hire more aggressively and fuel growth at faster rates — and to their detriment in some cases, support higher burn rates. And larger LPs can now get in bed with attractive VCs whose funds, until now, were too small to join.

One could make the argument that today’s crop of companies is simply better than those before it, and they might be right. Entrepreneurs and investors often use this argument, or variant of it, to justify their most recent round. But that doesn’t change the fact that public markets revert to the mean over time, and would not support the substantial valuations of many of today’s unicorns. Nor does it change the fact that these companies simply cannot continue to grow rapidly forever. And, when growth slows, so will the appetite of late-stage private investors. When a unicorn rejoins reality, there are four options:

1. Plan to get acquired for a very high price. As private companies reach unicorn status, they’re not only shooting for a $1B exit, but a multibillion dollar one. There are only a handful of companies that can acquire a unicorn, and even fewer that have actually done it: Facebook (WhatsApp and Oculus VR), Apple (Beats Electronics), Google (Nest), and VMWare (AirWatch). This substantially narrows the potential set of acquirers, which makes acquisition more of a fairytale than a true strategy.

2. Go public. To make the leap to public markets, unicorns need to maintain a healthy growth rate while decreasing time to profitability in order to justify their pre-IPO valuation. If not, prepare to take a big hit once you do go public. New Relic is a recent success, but it’s important to note that the company only took one round of financing, valuing them over $1 billion before going public.

On the other hand, Box’s IPO earlier this year was successful (disclosure: I’m a shareholder), but it happened nearly a year after its initial filing, during which time the company raised an additional $150 million in private capital. Not to mention, Box priced its shares relatively conservatively in response to Wall Street’s cooling towards tech IPOs of late. Hortonworks also faced a painful IPO process in which the company initially went public at a price lower than its last private valuation.

3. Stay private and work to reach profitability. If you don’t, you won’t be able to survive. For most businesses, though, the advantages of going public make doing so a clear choice for many venture-backed tech companies.

4. Flame out. We’ve seen this before with companies like Fab and Fisker Automotive. While not an option anyone would choose, this may be the unfortunate and logical conclusion for many now-sought-after companies. We’ll see this more frequently when the music finally stops and late-stage private capital is not as cheap as it is today, but for now, there’s still a lot of it to go around.

Many growth VCs are playing a risky game by pouring seemingly endless funding into so-called unicorns, but entrepreneurs have the most to lose. By accepting ever-larger funding rounds at higher valuations, entrepreneurs are subjected to the lofty expectations of investors, limited partners, employees, and the media, and while these unicorns are often increasing in value by the metrics private investors use to measure growth, there will not be an endless supply of funding – even if the end isn’t in sight today.

If you’re riding the ‘private IPO’ gravy train when capital finally stops pouring in, entrepreneurs may very well find a big gap between what the public market will bear and the burn rates startups have become dependent on. While this scenario is the logical conclusion for most unicorns, some will emerge from this cycle looking supernatural. In many cases, they’ll be just as lucky as they are tenacious.