Today there are 2.6 billion smartphone subscriptions globally, and while growth has been levelling off in developed markets like the U.S. and Europe, it’s not stalling altogether by a long shot. By 2020, globally there will be 6.1 smartphone users led by huge growth in less mature markets. And with 6.1 billion smartphones in circulation, we will see a tipping point of sorts: smartphones will finally overtake the number of active fixed line subscriptions worldwide in 2020.

The numbers come from the latest annual Mobility Report from Ericsson, which is being published today. Using data gathered from around 100 carriers globally, Ericsson uses this to paint a picture of what is going on right now, as well as what to expect in the future, covering not just how many people are using mobile networks but also how they are using mobile.

Those 6.1 billion smartphone users works out to some 70 percent of the world’s population using smartphones in five years’ time, a measure of just how central these devices are becoming to how we communicate with each other and do much more.

In fact, “total mobile” subscriptions by 2020 will actually number 9.2 billion. When you take into account Internet-of-things and M2M services, mobile broadband and even some basic remaining feature phones, there will be 26 billion connected devices in five years’ time. (As some point out, however, this is actually a downward revision from Ericsson’s previous forecast of 50 billion connected devices.)

Still, despite the rise of these new mobile-based services, and the growth of other categories like tablets, it’s smartphones that are leading the mobile charge. By 2020 they will account for 80 percent of all mobile data traffic.

This growth has a big impact in more ways than one. For one, it points to how our own behaviour as consumers is evolving.

But on a more practical level, it also points to a need for carriers to invest in networks to carry all that data traffic (or — as Facebook and Google may hope will be the case — look for other alternatives to provide connectivity); and it highlights the opportunity for startups and bigger businesses to create apps and other services to meet our mobile demands.

There is a ton of data in the report; here’s a run-down of some of the more interesting stats, graphics and predictions:

— Emerging markets are where all the growth is at. Ericsson predicts that regions like Asia Pacific, the Middle East and Africa will account for 80 percent of all new subscriptions in the next five years, continuing on with with trend that it is already tracking. In Q1 of 2015, the top five countries by net additions were India, China, Myanmar (which is truly far behind; it’s only now starting to sort out certain aspects of its services such as international roaming), Indonesia and Japan saw the most net adds of the 108 million new subscriptions around the world in that period. 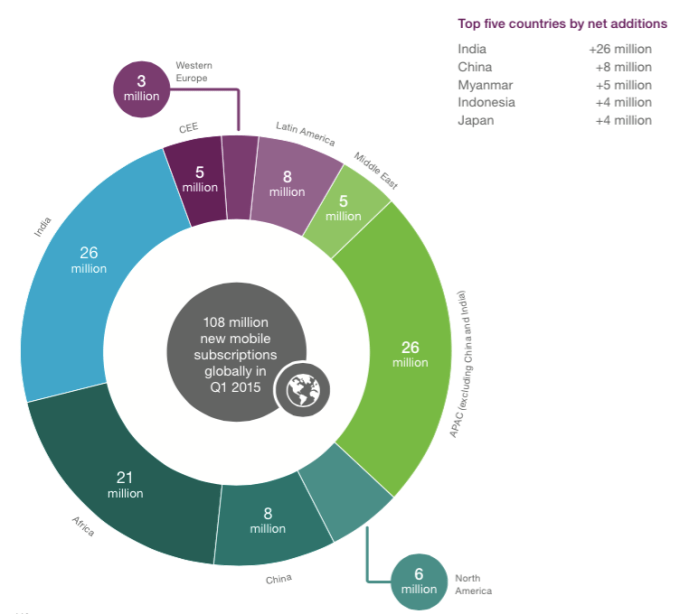 — 80 percent of mobile data traffic will be from smartphones by the end of 2020. While we hear a lot about how people are now using their smartphones as their primary computing devices, the fact is that we are in the midst of a veritable explosion of mobile data usage. Ericsson says it will grow tenfold in the next five years, with Asia Pacific alone accounting for 45 percent of that.

Although growth is happening in one place, usage will be taking place elsewhere. As is the case today, the U.S./North America and Europe will continue to see the most data usage per smartphone, as people continue to consume more bandwidth-heavy services like video on their devices.

— Video already accounts for 45 percent of app traffic, will rise to 60 percent. The story here is about OTT providers like YouTube and Netflix, which are the two most popular and therefore the biggest gobblers of bandwidth. This is a fact that is not going away: video consumption on mobile is currently growing at a rate of 55 percent annually, Ericsson says. It further notes that YouTube alone accounts for between 40-60 percent of all video traffic today. Interestingly, music streaming is in a firm second place, and although it is “gaining popularity” its unlikely to overtake video at any point. Part of the reason for this is because a lot of music consumption is offline. Social network only accounts for 15%.

In contrast to the traffic we are seeing in apps, mobile web browsing traffic will continue to decline. Today it accounts for just 10 percent of traffic and that will decline to 5 percent by 2020. 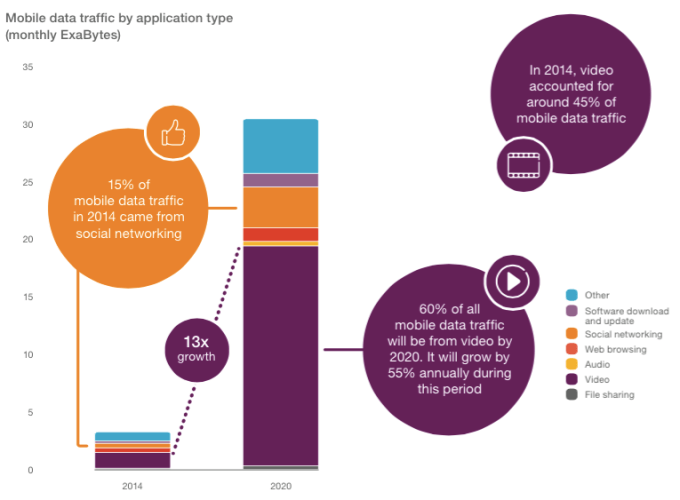 — Marquee events are driving huge amounts of usage. Ericsson notes that the 2014 football world championship was “one of the biggest social media events of 2014,” and that boom also played out on mobile with people using their smartphones to text, talk and post on social networks. In all the World Cup generated 26.7 TeraBytes (TB) of traffic, “the data equivalent of 48.5 million digital photos plus 4.5 million voice calls.”

— Size matters. It’s long been known that the size of the screen impacts what and how much a person consumers. Specifically, video continues to be a magnet service for tablet users — no surprise, given the larger screen and overall better experience. What’s interesting is that this does not trickle down to other kinds of functions that are more interactive. 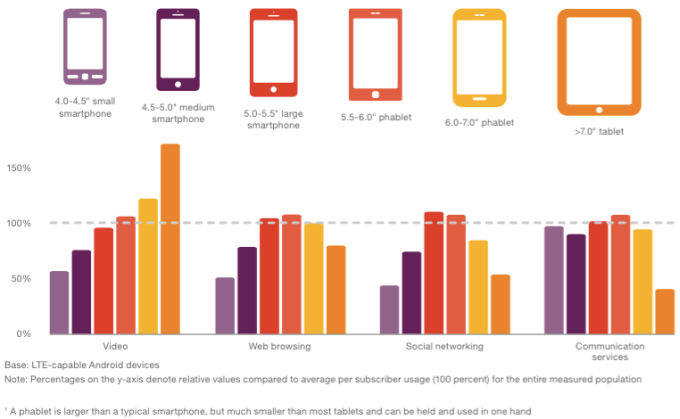 — Among the many things that we can do with our phones today, SMS is still the most-used app in the U.S., with old-fashioned voice calls remaining in second place.

A lot of this continues to be down to power users. “Heavy data users represent 10 percent of total subscribers but generate 55 percent of total data traffic,” Ericsson notes. “Video is dominant among heavy users, who typically watch around one hour of video per day, which is 20 times more than the average user.”