Amazon is testing a new way for users to discover products on its website and save them to a wishlist with a feature it’s calling Amazon Stream. On a page offering a grid of product photos, users can browse products for men or women or both, and click a button to save items to their own collection. The page indicates that the items featured on the site will be updated daily and consist of sponsored listings.

The site, which first popped up on new product finder Product Hunt over the weekend, appears to still be rough around the edges. That, along with the lack of an official announcement, indicates that the site is still under development.

That being said, we understand that Amazon Stream is actually several months old – it just hadn’t been spotted until now.

When asked, Amazon said it isn’t prepared to share more about the service today, but notes that it’s looking forward to getting customer feedback on the new product. “We are constantly looking for ways to improve the shopping experience for our customers,” a spokesperson says.

Currently, products on Amazon Stream can only be filtered by “Women,” “Men,” or “Your Saves,” and not by product category, price range, ratings or other criteria. Some have pointed out the site resembles a more basic version of the curated Amazon gift shop from Canopy, or even an attempt to take on Pinterest with a more visual means of online shopping. 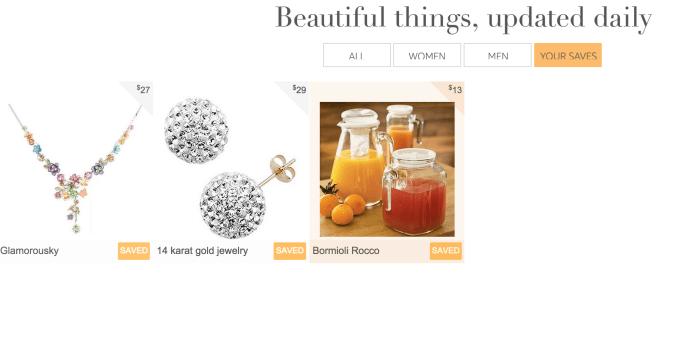 This wouldn’t be Amazon’s first attempt at challenging Pinterest. In 2013, Amazon debuted a feature called Amazon Collections, which was a more attractive and image-heavy site where shoppers could save, share and uncover new products as well as follow others to see what they had been saving. On Amazon Collections, Amazon offered its own variation on Pinterest’s pinboards with its own lists (“collections”) where users could save their favorite items. These collections were separate from your general Wish List, however.

Similarly, on Amazon Stream, users can save items they like, which are then made available under the “My Saves” section on the site. These items aren’t placed on your Amazon Wish List, but are instead only available on Amazon Stream.

As it stands right now, Amazon Stream is not all that useful as a means of browsing Amazon.com’s vast array of products because it doesn’t seem to take into account your own shopping history to personalize the experience, lacks sorting tools, and it’s unclear to consumers why the products are being chosen. (Are they ads? Amazon wouldn’t say. But a small note at the top of the page indicates paid inclusion, saying “these products are sponsored.”)

The products, which are primarily fashion-focused, range in price from inexpensive clothing, accessories and footwear to somewhat more expensive items, like a $500 watch or $250 shirt, for example. It does seem to avoid showcasing high-end, luxury goods, however.

Over the years, Amazon has tried out a number of tools aimed at helping users better shop its site. For example, in 2008, it launched a grid-like storefront called Amazon Windowshop, and a few years later it dabbled in augmented reality with Amazon Flow. It has also worked to make the site more social, through integrations with Facebook for tracking birthdays or learning what things Facebook friends want as gifts, as well as with Amazon Collections.

Some of these earlier experiments have since shut down, including, most recently, Amazon Collections, which now redirects users to their Wish List. Amazon confirms that Collections is no more – it was “just a test,” the company says.