A new startup called Paribus, launching today at TechCrunch Disrupt NY, wants to help online shoppers get money back when prices drop. Today’s consumers know that prices change more often on e-commerce sites than they do in brick-and-mortar stores. Amazon alone makes roughly 80 million price changes every day. But what many don’t realize is that there’s actually a way to get money returned to you when those online items go on sale. The majority of major retailers offer some sort of price match guarantee, but it’s often a hassle for consumers to take advantage of that option.

Brooklyn-based Paribus wants to solve that problem by tracking the price changes associated with your online purchases, then following the given store’s specialized procedures to file a claim on your behalf if the price drops.

To do so, the system first requires that users authenticate with their email provider, like Gmail, Yahoo Mail, Hotmail/Outlook, or iCloud, using the Paribus website. This gives the startup the ability to scan your inbox looking for the receipts associated with your online purchases.

The idea, explains Paribus co-founder and CEO Eric Glyman, is to basically offer a “set-it-and-forget-it” type of service for online shoppers. That is, after you authenticate with your online accounts that first time, it then just works automatically to save you money.

At launch, Paribus is able to track and price match e-commerce purchases from 20 retailers, including Amazon, Best Buy, Walmart, Target, Bloomingdale’s, Macy’s, Bonobos, J.Crew and others. It understands the nuances of each store’s own policies, which can often be confusing to consumers who try to track sales and price changes for themselves. For example, Amazon matches prices for TVs and cell phones with competitors, but only matches its own prices for other items.

Meanwhile, the various stores each have different procedures about how you go about filing a claim – some require you to use an online form, others provide an email address, and so on.

In addition to tracking just the price changes themselves, Paribus can also spot if there was a coupon code that should have been applied at checkout to save you money and request the difference on your behalf.

The company only makes money when it finds savings, Glyman notes, as it takes a 25 percent commission. The money it finds for customers is returned to their payment card by the online retailer.

Glyman, whose background in the financial services space had him scouring contracts for money-saving loopholes while restructuring troubled companies, says he came up with the idea for Paribus after realizing that everything he was buying online seemed to bounce around to different price points.

Along with co-founder and CTO Karim Atiyeh, they founded the company last summer and have since been running a beta with around 1,500 friends and family members who have saved over $10,000 combined over the past couple of months. (Most of the sign-ups were actually last month, however, the founders note.) 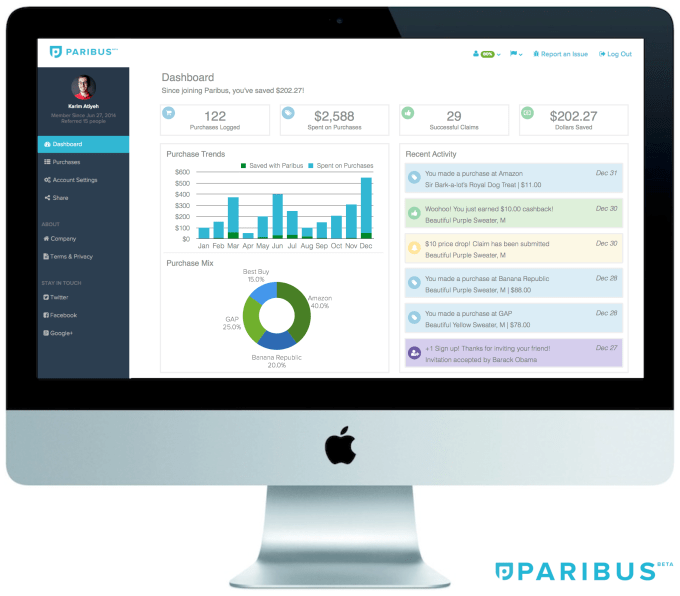 Now the company is launching to the public, so anyone can try out Paribus’s money-saving system. Once live, the startup’s goal is to expand its user base and add support for the long-tail of e-commerce retailers, before extending into other areas. But in the long-term, Glyman says he could see Paribus working with credit card “cash back” programs among other things.

However, he stresses that the business model will always revolve around the “success fee,” never on selling users’ data to third parties. “Users are not the product,” Glyman says.

Paribus also plans to launch a native mobile app later this summer, though its current website is mobile-optimized.

The product should appeal to a variety of online shoppers, including deal hunters who are always worried that they’re missing a promo code, or even those being targeted by online retailers’ new “personalization” techniques, which show different, customized prices to each visitor.

The startup has a small, undisclosed amount of friends and family funding and isn’t actively fundraising.