A new chapter starts today for Elance-oDesk, a platform where 4 million businesses connect with 10 million knowledge worker freelancers to fill contract jobs. More than a year after the two competitors merged to form one freelancer powerhouse, and five months after raising $30 million, it is finally rebranding under a new name, Upwork.

And with the new name comes a new platform, which adds a new mobile app, new search algorithms, faster processing and a real-time chat service — a completely free product that Upwork’s new CEO Stephane Kasriel describes as a “Slack killer.”

Kasriel took the CEO reins of the Mountain View-based company two weeks ago but has been with the company since 2012, and he says that Upwork has spent the better part of the last year working on the new platform and adding the new real-time features that the company thinks will set it apart from the rest of the pack.

“We have completed the second chapter of online work,” he says, referring to the establishment of online workplaces like Upwork and other competitors like Freelancer.com, which emerged in the wake of permanent job searches migrating from print to the web. “Now we want to enter the third.”

The online job search market is full of competition, with Indeed.com, Monster, CarreerBuilder, LinkedIn and many more also playing strong in the permanent jobs space. As a startup and focusing only on temp assignments, Upwork has managed to hold its own. The company works with a swathe of huge businesses like Unilever, Coca-Cola, HP and others Kasriel cannot name. He says that currently its platform generates $1 billion worth of jobs. Upwork takes a 10 percent cut, meaning that its revenues are around the $100 million mark.

Still, there is a lot of room to grow: the company estimates that the contractor job market is worth some $1 trillion annually, something that Upwork hopes to tackle with its existing network covering 180 countries and some 2,700 skills. Kasriel says the aim in the next six years will be to grow the value of jobs filled on its platform to $10 billion.

That’s where they hope adding more efficient and more sticky products will fit in.

You can compare what Upwork is doing to the problem that e-commerce companies try to solve. Part of the challenge for the latter is making discovery and check-out as quick and seamless as possible: all friction points become chances to lose your potential customers. Similarly, Upwork has updated algorithms to better match companies to people, and then when a connection is made it works to drastically cut down the time it takes to seal the deal.

How drastic? The company says that it typically has taken three weeks to hire people for contract jobs, and the new platform brings this down to minutes. 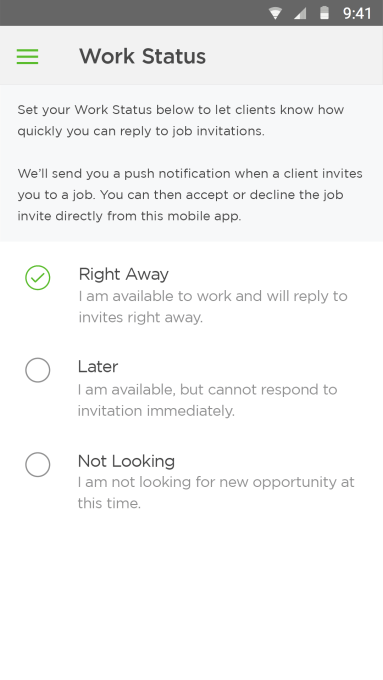 Part of the way it’s cutting down time is by being all-accessible via the mobile app. And another is through this new chat platform. The idea here is that instead of reverting to a slow email-back-and-forth, people can now instantly see if a person is online and can ping each other to start a conversation right away about a potential job. Then when the deal is done, you use the same platform to start sharing files and discussing the work at hand.

And tapping into the idea of messaging being one of the most sticky and persistent services of our time (something that Slack has used to extremely successful effect), Upwork is making its collaboration and chat platform completely free to use, and also available to anyone who wants it — not just those people posting jobs on Upwork or those looking for work.

As with Slack, Upwork is looking to add more features to the service, such as integrations with GitHub, Google Drive, Jira and video functionality later this year.

The company says that today there are some 50 million freelancers in the U.S. alone. “This is a mainstream business,” Kasriel says. And that will inevitably lead the company down the road to other kinds of products and services to meet that audience. (For starters, think about all the things that full-time jobs offer employees that you don’t have as easily or cheaply as a freelancer, such as pension schemes, or insurance options.)

One area that Upwork is not looking to expand to, however, is home services; it’s an area that Freelancer has recently started to tackle, leveraging its own marketplace of knowledge-worker freelancers to fill spare time with physical jobs like event staffing, putting it in competition with Amazon, Google, Angie’s List, TaskRabbit, Thumbtack and Handy. “We are trying to focus on one thing incredibly well, rather than many things average,” Kasriel says.