Did you know you’re supposed to replace your toothbrush every three months? Apparently, this is actually the recommended time frame preferred by the ADA, but most consumers just wait until their bristles wear out, or it randomly occurs to them as they’re walking through the dental care aisle at their local store.

A startup called Quip, showcasing its service here today at TechCrunch Disrupt NY’s Startup Alley, believes it has a better way: a new brushes as a subscription service, shipped to you automatically every three months.

The company now has some investor buy-in as well, as it’s raised additional seed funding after being live for just a few months. Since its launch in February, it has grown its subscription business to “several thousand” customers.

At first, it sounds sort of crazy. After all, how lazy are people that they need toothbrushes, of all things, on a subscription basis? But if you think back to when you actually last replaced your toothbrush, and then think about all the other, um…matter, that floats around in your bathroom where your toothbrush is kept, you might convince yourself that you need a little reminder to swap out your old brush for a new one.

The startup was founded by Simon Enever, an industrial designer previously at fuseproject, and product designer Bill May. Enever explains that having worked with dental care clients in the past, he found that many of the innovations surrounding toothbrush bristles and toothpaste are simply gimmicks. What dentists really need people to do is to brush often, floss and, of course, swap out their brushes on a regular basis.

At Quip, you initially purchase either a plastic brush base for $25 or a metal base for $40, each of which comes with your first three months of toothpaste and your first toothbrush head. Both brushes also vibrate, allowing you to clean your teeth more effectively. (Most people brush too hard, as it turns out. The vibration encourages them to brush with the right amount of pressure.)

The brushes themselves are custom-designed and assembled in the U.S. The metals are also sourced in the U.S., while the plastics are from China.

When it comes time to replace your toothbrush, you pull out the head and toss it. Every three months you get a pack with a new head, a 4.7-ounce tube of toothpaste and a travel toothpaste. After buying the base unit, the subscription cost is only $5 every three months – which frankly is more than reasonable when compared to the cost of buying new in the store.

Meanwhile, the company itself is doing fairly well even at this low price point – its margins are above 50 percent.

Quip has experimented with selling the brushes directly, without requiring customers to agree to recurring billing. However, they found that the majority of those (98 percent) who visited Quip converted to subscribers. 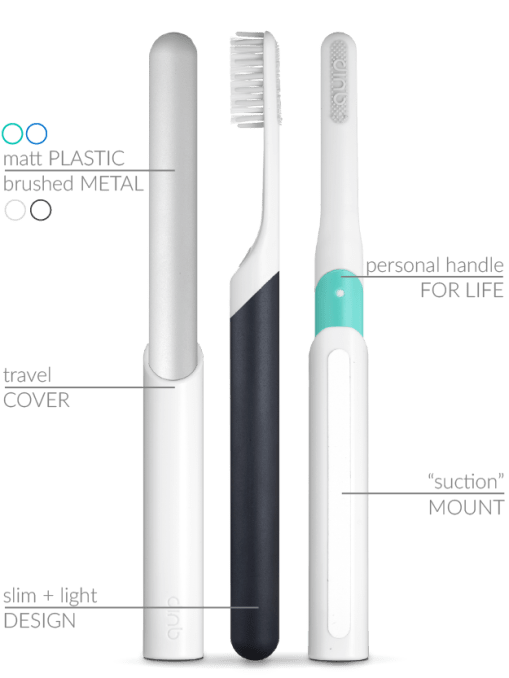 One challenge for Quip is in educating the market that changing their toothbrush more often is something that they should be doing, and that a set-it-and-forget option like this even exists. But getting real-world dentists on board as partners could help Quip get in front of customers. This is something the team is focusing on, says Enever.

New York-based Quip is currently endorsed by an NYU dentist, and is planning to announce some dentist partnerships in the near future. They’re also in discussions with a dental firm that may become investors.

Also today, Quip is launching its referral program, which is aimed at helping the company generate more word-of-mouth (ha!) referrals. Friends who recommend others to join will receive their next toothbrush head for free.