SwiftKey, the makers of one of the more popular third-party keyboard applications for Android, and more recently, iOS, is out today with a new product – an “experimental” mobile keyboard app it’s calling Clarity. While SwiftKey’s flagship product is a predictive keyboard that adapts to the way you type in order to smartly suggest words you can select with a tap, the new Clarity keyboard instead goes back behind you to check the last few words you’ve typed, then retroactively corrects them.

The idea with the new app is to allow mobile users to focus on what they’re writing, as they no longer have to stop and tap on suggested words, or manually make corrections. Instead, Clarity’s “multi-word autocorrect” feature will automatically make changes to the text you’ve entered, and, if it gets it wrong, you can tap the backspace key to undo its autocorrections quickly.

You can also drag your finger from the SHIFT key for quick access to capital letters, or from the symbols key for symbols. However, SwiftKey Flow (swipe-typing) is not part of Clarity.

And like SwiftKey itself, the software adapts to your own typing patterns by learning the words, slang, nicknames and phrases that are common to your own mobile conversations. In other words, the app gets better the more you use it.

The idea to fix your typing after the fact is something native keyboards do today but only to correct a misspelled word in most cases. Clarity looks at groupings of words, which could potentially make it smarter than traditional autocorrect if it gets things right. It may also appeal to those who don’t care for predictive text because they feel that having to stop typing to pick word suggestions actually slows them down.

Clarity features a clean and simple theme that works on Android 4.4 and higher, but at launch it only supports U.S. English.

The company warns, too, that this new keyboard app is “unfinished,” which means new testers are likely to encounter bugs and other issues if they choose to download the app from Google Play. For now, SwiftKey is only looking to experiment with this software and get feedback from early adopters about what they like and dislike, as well as the problems they encounter, it says.

Some early adopters are already reporting bugs and crashes, according to Google Play reviews for Clarity, while others say that its correction capabilities are great. Your mileage may vary based on your particular Android device and your OS version. 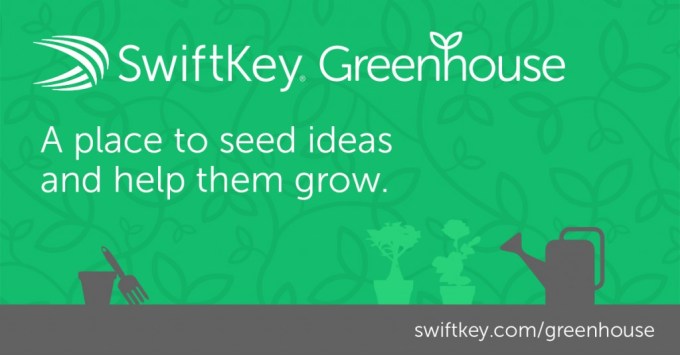 What’s also interesting about the release of Clarity is that it’s coming out of a new division within the company called “SwiftKey Greenhouse,” which will serve as a home to other experiments like this in the future.

Basically an R&D hub with a consumer-facing component, Greenhouse will offer users a place where they can try out new apps that the company wants to test ahead of a full public release. In some cases, it may be a matter of just working out the kinks in new software with a dedicated crowd of testers. But in other cases, SwiftKey will use Greenhouse as a place to try out ideas that it’s not sure how users will respond to.

None of the apps released from Greenhouse will include the guarantee of direct support in the case of problems, so you may want to proceed with caution if you’re not used to being a beta tester for new products. However, for those interested, you can sign up on the Greenhouse landing page to be notified of forthcoming releases as they launch.

If successful, Greenhouse’s ideas and experiments may make their way into SwiftKey’s core products, while others will remain internal, the company explains. “SwiftKey’s core value is innovation – we like to constantly challenge our assumptions,” reads the company’s announcement of the new hub.

SwiftKey’s Clarity app is live now as a free download on Google Play.