The Lexus RC 350 F Sport combines a stylish body and just over 300 horsepower to deliver a luxury ride that won’t bore you on your commute.

If you’re familiar with Lexus’s attempts at making their lines a bit sportier, the RC 350 F Sport borrows the same V6 engine that powered last year’s IS 350 F Sport. It’s got plenty of kick, but Lexus wraps it in a heavy body — if speed is what you’re looking for, you can find faster cars from German competitors in the same price category, or get something quick but less luxurious.

With that said, a BMW looks like a BMW and a Mercedes looks like a Mercedes. The RC 350 looks different — Lexus essentially copy-and-pasted the front, middle, and rear sections of the car from different models in the IS and GS lines, and the combination looks good. Slowly but surely, Lexus is figuring out which of its design patterns don’t give off the “this would be a great car for grandma” vibe and building its own unique look. 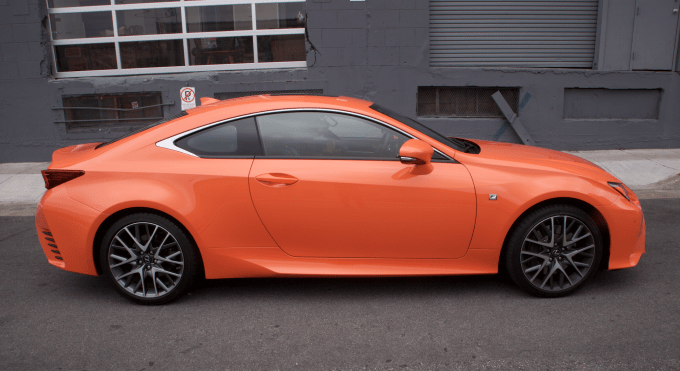 If the look really does it for you but for some reason you need more power, there’s always the Lexus RC F, which draws from the same design aesthetic but includes a 5-liter V8.

The car offers several tiers of drive modes, ranging from Eco to Sport+, with a Snow option thrown in for good measure (or, you know, traction). If you’re willing to drive around in Eco mode most of the time, you can easily eek out the estimated 28 highway miles to the gallon in the RC 350. But let’s be honest: you want to drive around in Sport mode, you’re going to be somewhere in the range of 10-15 mpg.

Of course, which mode you drive in is partially driven by when and where you take the car. On the freeway at night, I could drop the car into Sport+ and easily pass that guy taking his time in the second-most left lane, with little indication that the car is pushing itself until I got to speeds that made me uncomfortable, given my review car’s “Ticket Me” Orange paint job. Driving in the city, it usually made more sense to cruise around in Eco mode, in which the car feels more like a nice, responsive sedan than a coupe with the word “Sport” in its name. 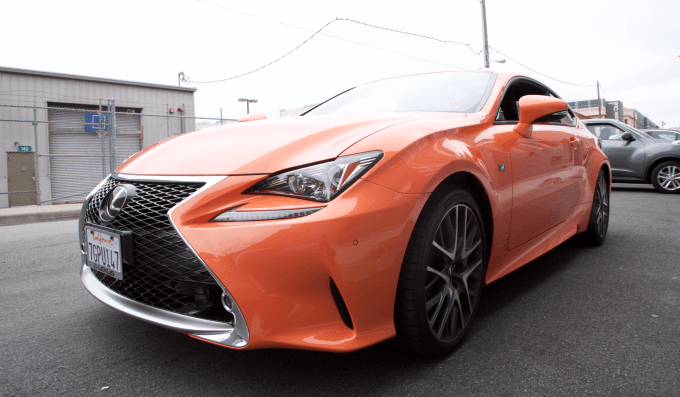 The entire RC 350 line is slick, but the F Sport model brings a sportier interior and grill, better brakes, and a more aggressively-tuned 8-speed automatic transmission.

If there’s one thing I’d like to nitpick about the car, it’s that the media system is still very similar to what Lexus offered in its vehicles last year. Instead of navigating through the interface with a puck-like nub, there’s now a trackpad that clicks as one big button. It’s as responsive as you’d hope, but it’s still too distracting to navigate through the interface with a pointer when you’re trying to navigate a sports car through traffic.

Most of the time, you’re going to want to just use the controls on the steering wheel, but even that has its quirks. For instance, I found it a bit odd that you can’t use the directional buttons on the right side of the wheel to navigate through the navigation or media screens — instead, it only controls the screen behind the steering wheel. While the trackpad isn’t horrendous by any means (mostly, it’s just slow at text entry), I think I’d prefer a touch screen in the center — accessible to the passenger — and have those controls on the steering wheel serve as a convenient option for the driver. 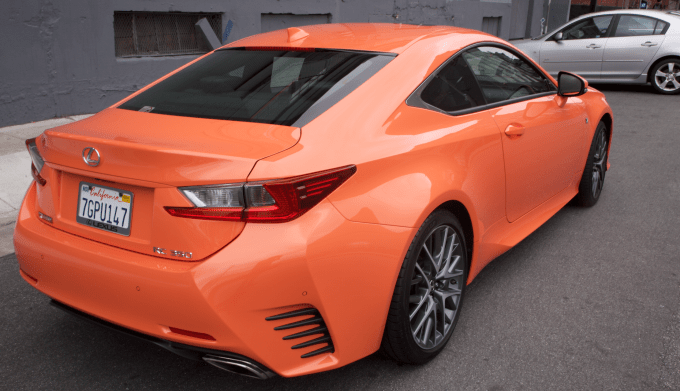 There isn’t actually a vent by the exhaust, but that little flourish is one of several that rounds out the sporty look Lexus is going for.

Aside from that minor complaint, I like most of the decisions Lexus made with the interior of the car. The mix of black leather, plastic, chrome, and carbon-fiber textures strikes the proper balance of sporty and luxurious, and the seats both fit the look and comfortably wrap around your backside. As with every review of every coupe that includes a backseat, I’ll mention that it could be roomier. With that said, our video guy managed to survive back there for our shoot without much trouble, and if the person in the front passenger seat is willing to move forward a bit, you can get away with having two mildly uncomfortable adult passengers.

It’s tough for me to put myself in the shoes of someone who’d consider buying this car, but here goes: I think it’s for the (wealthy-ish) commuter who wants their car to get noticed. It’s cheaper than a Tesla, more distinct than German competitor, and can growl when you put your foot down. You’re not going to take it to the track, but you might have some fun beating your fellow commuters when the traffic light turns green.