Products like Slack, Hipchat, Yammer and Asana have been slowly picking apart the world of enterprise communication, giving workers new, easier to use, and frankly more fun platforms to speak to each other and work on documents together.

Now another startup wants to get in on the action. Quip — the mobile-first “word processor” app co-founded by ex-Facebook CTO Bret Taylor that lets people create and collaborate on documents with each other — is taking another step forward in its push into social features. It is adding Chat Rooms, a new way for people to speak to each other within the app.

Chat Rooms are exactly what they sound like: a separate channel for messaging, where users can still link messages to Quip documents but also a number of other services, as well as emoji, GIFs and custom memes.

What’s a custom meme, you ask? 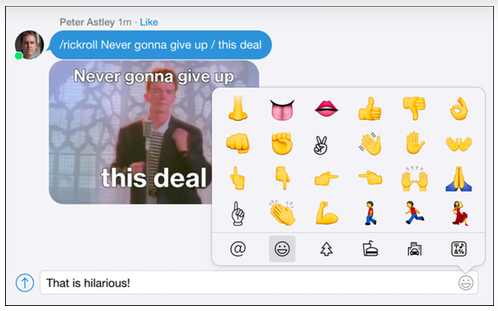 Adding Chat Rooms is part of a larger redesign of the app that is also coming out today that has several other new features. First, the app now algorithmically sorts your documents and conversations so that the ones you are most active in are at the top. (A very Facebook-influenced feature, in my opinion.)

And, it is adding something that could come as a relief if you’re feeling finished with our age of over-notification: users can now decide which notifications they would like to receive among messages, doc edits, annotations, direct responses, and so on.

Quip first opened for business in 2013 and now has over 10,000 businesses and “millions of individuals” using its service, Taylor tells me.

This is not the company’s first foray into chat services — it has always had a way for users to communicate with others alongside documents, in Taylor’s words, “without the insufferable process of emailing attachments back and forth”. To that it added a “like” button last year (again with a hat tip to Facebook, which happens to be one of Quip’s customers, too).

But significantly, adding standalone Chat Rooms catapults Quip into being a much more social tool, where Taylor says “teams can create ongoing discussions that aren’t attached to documents.”

Not unlike Slack, conversations in Chat Rooms can be customised with integrations of notifications from third-party services like Twitter, Zendesk, Stripe, GitHub and JIRA, along with other updates like weather or public transit notifications, and they support other features like GIFs and emoji, and they can still be directly linked through to Quip documents.

“While you could have conversations in Quip before, this feature enables teams to really make Quip a communication hub, and we think the deep integration with documents is unique and extremely valuable,” Taylor says.

There is possibly another reason why it’s smart for Quip to enhance conversation features on the app: competition.

Taylor would not comment on how many of Quip’s users already integrate the service with Slack or other collaboration platforms. (Of note, Slack doesn’t offer currently a direct integration of Quip into Slack among dozens of other integrations, while Quip does offer a way of integrating Slack messages into Quip by way of Zapier.)

Nor would he say anything about engagement on Quip. “We measure slightly unusual things, like the number of ‘document editors’ per team,” he says, “but we aren’t releasing those stats publicly right now.”

But given how sticky messaging has proven for other businesses — Slack, WhatsApp, Messenger and many others being key examples — it’s no surprise to see Quip enhancing this feature as it continues to grow.

According to Taylor, it’s also just a matter of making the core functionality of document creation more useful.

“The value in Quip chat is in its deep integration with your team’s documents and spreadsheets. You can start chatting about a design and start a design document with your team with a click of a button,” he says. “Communication has always been a cornerstone of the Quip experience, and this product represents the natural evolution of our product strategy. We want Quip to be the hub for all of for all your most important conversations and content.

For now, Chat Rooms are free to use, but Taylor says the plan will be to limit the searchable message archive for its free tier of users. Taylor says that other “fun” features that have been “extremely popular in our beta testing”, like custom memes and slash commands, will remain free.

And if you think that the Slack approach of making hay while the sun shines is the only way to go, here’s a riposte to that: to date, Quip has raised only a single round of funding, $15 million, from Benchmark’s Peter Fenton, Yuri Milner, Marc Benioff and other angels in late 2012. “We don’t need money right now and are not actively pursuing another round,” Taylor says.