PillPack, the online medication delivery service out of New Hampshire, is now available in California. This is the 47th state in the U.S. to receive the green light to allow consumers to order prescriptions, over-the-counter medications and vitamins from the startup.

The startup sees itself as more in competition with brick-and-mortar retail pharmacies, such as CVS and Walgreens. “Folks who regularly take multiple medications are constantly driving to the pharmacy, sorting pill boxes, chasing down prescribers for renewals, and haggling with their insurance companies,” said CEO of PillPack TJ Parker. “We started PillPack to eliminate this frustration and replace it with a simple end-to-end experience.”

PillPack, which launched just over a year ago, uses robotics technology to pre-sort and date all prescription medications into individual packets and then texts the customer when the pills have shipped, adding a layer of convenience to the customer.

There are regulations around who can deliver prescription medicine in the U.S. PillPack is one of the few that have the Verified Internet Pharmacy Practices Sites license needed from the National Association of Boards of Pharmacy in order to do this. PillPack told TechCrunch that the California licensing needed to deliver took a bit longer to get than other states, but this was all sorted out at the beginning of the year. 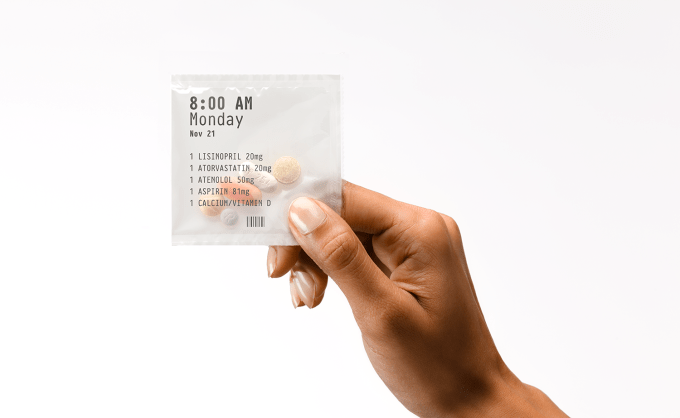 The main reason for waiting to roll into the state was the sheer volume of possible new customers, according to Parker. “One of the reasons we held off on launching in California is because of the demand. In order to maintain our level of service, we need a balance of pharmacists to handle the needs of new customers or else we would be just like the retail chains,” said Parker.

California happens to fill the largest amount of prescription medications in the country. According to the latest figures from the Kaiser Family Foundation, California retail pharmacies fill nearly half a billion medical prescriptions every year – almost twice as many prescriptions as Texas, the second-largest prescription consumer in the U.S.

Add to that what PillPack was made for – those who need to take multiple prescriptions. Roughly 10 percent of the U.S. population takes 5 or more medications each month. That’s about 3.8 million people in California.

PillPack declined to offer user numbers, revenue, market share or growth rate in other states. However, a spokesperson for the company did say that PillPack was adding roughly the equivalent volume in sales of an individual average retail pharmacy. CVS owns about 15 percent of the market, has about 7,600 retail store locations, and makes $44.9 billion annually, according to the latest figures from Drug Channels Institute.

PillPack said it will be working on a native iOS app for prescription fulfillment next.