Google argues that VP9, which is the default codec for YouTube’s HTML5 video player now, enables users with limited bandwidth to watch higher quality video than before without suffering from frequent rebuffering.

The VP9 codec can reduce the bandwidth needed to play a video by up to 35 percent, according to Google. This means that a user who was previously relegated to watching 480p video should now be able to watch 720p, for example. In Mexico, VP9 users spent almost 50 percent less time watching low-quality video than before. 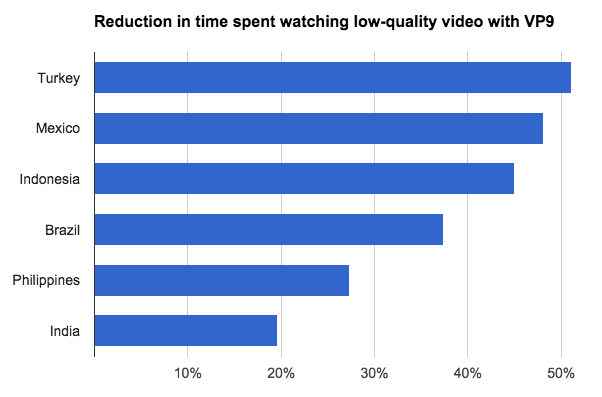 In addition, YouTube argues that VP9 makes 4K video streaming possible for more YouTube users (though you still need a good amount of bandwidth — and a nice computer and screen — to watch the new 4K 60 FPS videos YouTube recently enabled).

Because we don’t know how many hours of video YouTube’s users actually watch in total, it’s impossible to say what percentage of YouTube’s total streams VP9 accounts for (YouTube only says its users watch “hundreds of millions of hours of video daily”).

Given that it’s now pretty much the default on system configurations that support it, though, we can assume that it will account for a substantial number of all streams going forward (and chances are most of those 25 billion streams are from the last four months since Google switched to the new HTML5 player).