Apple has acquired FoundationDB, a company that specializes in speedy, durable NoSQL databases, TechCrunch has learned.

A notice on the FoundationDB site notes that it’s no longer offering downloads of its database software. Financial terms of the deal were not available. CEO David Rosenthal was previously VP of Engineering at Omniture and co-founded the company with COO Nick Lavezzo and Dave Scherer in 2009.

FoundationDB’s attractiveness came in the speed at which it handled ACID-compliant transactions and coupled that with strong scalability. FoundationDB hosted a booth at TechCrunch Disrupt SF in 2012, where we first wrote about its approach to a modern NoSQL database and its ‘NoSQL, YesACID’ motto. FoundationDB’s latest engine, which was covered by TC Columnist Jon Evans late last year, scaled up 14.4 million random writes per second. 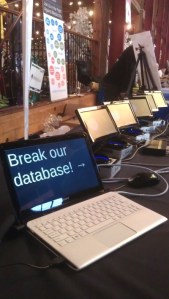 A FoundationDB blog post on its newest engine made the following claim:

At current (December 2014) AWS (non-spot) pricing and including enterprise FoundationDB licenses for all 480 cores with full 24/7 support this mega-cluster only costs about $150/hr. In that same hour this cluster will achieve 54 billion writes, yielding a cost-per-write of 3 nanodollars. Said another way, FoundationDB can do 3.6 million database writes per penny.

So. A fast, affordable and durable database company, acquired by Apple. It seems likely that this was an acquisition designed to bolster Apple’s server-side technologies for the App Store, iTunes Connect or iTunes in the Cloud. With millions of apps now in the store and billions being served to users, there is undoubtedly room for improvement in those systems.

Of course, there is always Apple’s rumored over-the-top TV service, which some reports claim is coming our way later this year. The need to be able to serve video at scale there will likely require bolstering systems, as we discussed with the head of media at the MLB just this week.

The reliability and speed of Apple’s cloud services are more critical than ever now that it has shipped 700 million iPhones alone — along with millions more iPads and Macs — all of which use iCloud.

“Apple buys smaller technology companies from time to time, and we generally do not discuss our purpose or plans,” said Apple, in response to an inquiry about the company. FoundationDB has not responded to a request for comment.

Additional reporting on this story contributed by Jon Evans