Google Play, Google’s marketplace for Android applications which now reaches a billion people in over 190 countries, has historically differentiated itself from rival Apple by allowing developers to immediately publish their mobile applications without a lengthy review process. However, Google has today disclosed that, beginning a couple of months ago, it began having an internal team of reviewers analyze apps for policy violations prior to publication. And going forward, human reviewers will continue to go hands-on with apps before they go live on Google Play.

Additionally, Google announced the rollout of a new age-based ratings system for games and apps on Google Play, which will utilize the scales provided by a given region’s official ratings authority, like the Entertainment Software Rating Board (ESRB) here in the U.S.

According to Purnima Kochikar, Director of Business Development for Google Play, Google has been working to implement the new app review system for over half a year. The idea, she says, was to figure out a way to catch policy offenders earlier in the process, without adding friction and delays to the app publishing process. To that end, Google has been successful, it seems – the new system actually went live a couple of months ago, and there have been no complaints. Today, Android apps are approved in hours, not days, despite the addition of human reviewers.

“We started reviewing all apps and games before they’re published – it’s rolled out 100%,” says Kochikcar. “And developers haven’t noticed the change.” 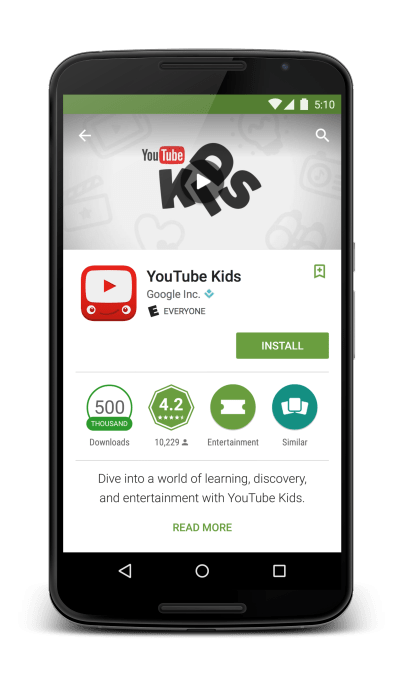 The reason why Google’s app review team is able to process app submissions so quickly is because the system also includes an automated element. Before app reviewers are presented with the applications, Google uses software to pre-analyze the app for things like viruses and malware as well as other content violations. For example, its image analysis systems are capable of automatically detecting apps that include sexual content, as well as those that infringe on other applications’ copyright.

Google didn’t want to get into the specifics of what it’s capable of in terms of automation, but notes that it can identify a number of violations beyond just the inclusion of malware.

Though Google uses more machine-aided processes in reviewing applications than Apple does currently, Kochikar admits that with regard to its human element, Google’s system may not be “as robust” as those from “rivals.” That is, Google is trying to balance being able to catch the violations earlier without impacting the time it takes to get an app published to its Android app marketplace.

The new system also means that developers will now be able to see their app’s publication status in more detail, and learn quickly if and why an app has been rejected or suspended, says Google. In the Developer Console, app creators will see their app’s latest publishing status, allowing them to easily fix problems and resubmit apps after correcting minor violations.

In addition, Google also announced another far-reaching change which will affect all Google Play developers worldwide: the addition of an age-based ratings system for apps and games. Starting in May, developers will have to complete a content questionnaire about their app ahead of submission, which has been designed to help identify objectionable content and return the most appropriate rating. 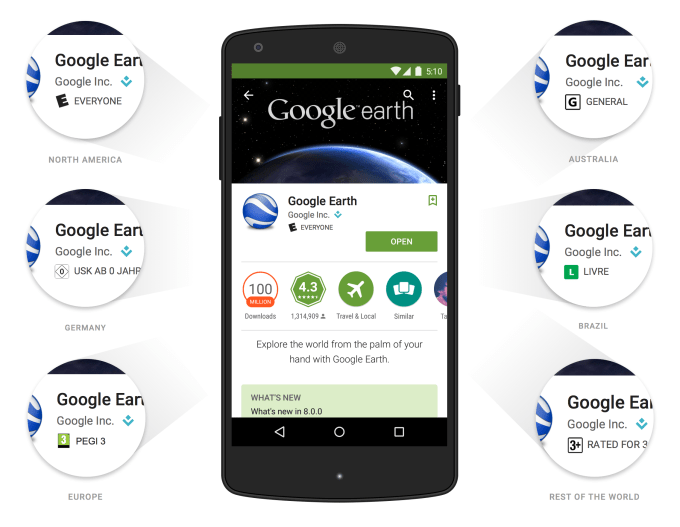 Because rating systems vary by region, Google has worked on this implementation with the help of the International Age Rating Coalition (IARC) and its participating bodies, including the Entertainment Software Rating Board (ESRB), Pan-European Game Information (PEGI), Australian Classification Board, Unterhaltungssoftware Selbstkontrolle (USK) and Classificação Indicativa (ClassInd). Those regions that don’t have a specific ratings authority in place will include a more generic rating, notes Google.

That means that, in the U.S., Google Play games will feature the same ratings as you’d otherwise find on boxed software, like “Everyone (E),” “Teen (T),” “Mature (M),” etc. Other countries’ ratings will reflect those used by their own local organizations or regulatory bodies. And Google Play’s parental controls feature will be updated to allow blocking of these new rating categories.

Before today, app ratings on Google were somewhat problematic because developers were able to assign them by themselves. With the new age-based ratings, however, developers can’t override the rating without going back and taking the questionnaire again and editing their answers. Plus, Google says that it will review the ratings being produced by the new process, too, to make sure developers aren’t trying to lie on the questionnaire in order to adjust their app or game’s rating.

Initially, there will be a grace period while the new system is rolled out, but by the end of next month, it will become a blocking requirement for new app submissions and updates. Those apps that remain “unrated” may then be blocked in certain territories or for specific users, notes Google.