It’s been just over five months since we checked out the Equil Smartpen, a gadget that lets you record your notes and doodles to the cloud and even convert them to text. Today we’re checking out their new Smartmarker, which does the same thing but on any erasable surface.

Out of the box, the two most important gadgets are the plastic body that holds your marker and the base station that records your work. It can “see” what you’re working on for eight feet to the left and to the right, giving you plenty of space to work in knowing it’ll all be saved for later.

Writing with the Smartmarker feels like working with any other erasable marker because that’s exactly what you’re doing — instead of including a proprietary ink cartridge you have to swap out every few weeks, the Equil lets you drop in any marker you’d pick up in a 12-pack for a few bucks at Staples.

Instead of packing a bunch of smart guts into the marker itself, most of the work is handled by the base station. It’s got storage for somewhere around 1,000 whiteboards worth of notes, and connects to your phone, tablet, or laptop over Bluetooth.

With that said, there are some nifty functions on the marker itself. Towards the non-writing end of each marker case, there’s a small ring of blue, red or black. This is actually an interchangeable piece of plastic that determines the color “ink” used for the digital notes, so if you want notes by different people to show up more distinctly, you can have them use different color rings. 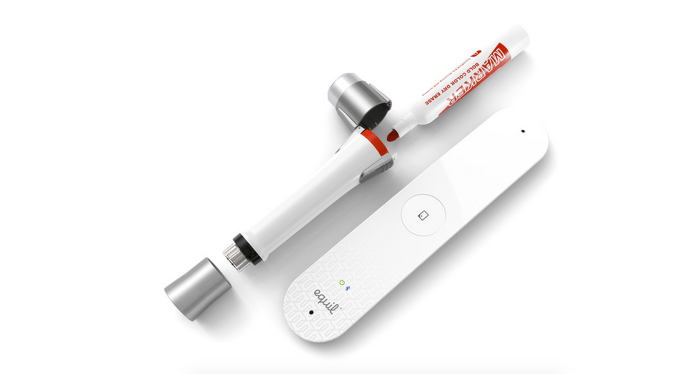 For those who frequently misspell or have trouble drawing straight lines, there’s also a smart eraser cap for the marker that wipes your work away from both the physical surface and the file in the Equil Note app. There will also be a separate eraser “puck” to do the same thing if you need to wipe bigger swaths of notes away quickly.

Speaking of the app, a new Note Stream feature could be what makes the Smartmarker a must-have for some teams. While you’re writing on the whiteboard, you can now have the app send recordings of notes to other Equil users in near real-time.

This allows for conference calls with whiteboarding for drawing out concepts without requiring everyone to use a teleconferencing app that looks like it was made by a mediocre Java engineer with a long checklist of features to include and no real grasp on UX. And when you’re done, you can sync all of those notes to the team’s Dropbox or Google Drive for easy record keeping.