Microsoft has been busy snatching up startups to fill out its mobile apps portfolio, and it looks like it could be buying one more. According to multiple sources, Prismatic — an app that recommends news articles to users based on what their connections are reading and liking — is on the block, and Microsoft is the front runner to get it.

It’s not clear what stage talks are at presently. Microsoft is one of several large companies that are talking to the startup, with the “most serious interest” otherwise coming from Apple and Yahoo. Google and Facebook have also showed early interest. Another source resolutely names Microsoft as the final buyer, and a price: $30 million.

According to CrunchBase, Prismatic has raised $15 million to date, with investors including Accel Partners, Jim Breyer, Yuri Milner and Javelin’s Alex Gurevich.

We have contacted both Microsoft and Prismatic about these rumors. Microsoft declined to comment for this article, and we have not had any replies from multiple attempts to contact Prismatic. Microsoft has made just over 143 acquisitions to date.

Prismatic’s potential sale, and the interest from big-name buyers, speaks both to some of the challenges news aggregation startups face these days, but also the bigger opportunity for Prismatic’s technology.

Prismatic was co-founded by Bradford Cross (who is CEO) and Aria Haghighi (who left and currently works for Apple), both machine learning and natural language processing specialists. The idea behind Prismatic was to create a platform that could provide accurate recommendations of content, using social signals and your own usage of the app to feed its algorithms.

The main product out of this tech has been its consumer-focused news reader, made for iOS, Android and the web, which recommends stories you might like based on interests that you specify (e.g., food, iPhone news, China), the interests of your friends, and how you interact with the links it delivers to you — do you click; do you share, save or discard; do you comment?

That product has had rave reviews from users, but, as one source describes it, the prospect for the company has been “a little tricky.” The crux of the problem: getting a mass of users interested in using a news-reading app as a way of getting new information.

“It’s not clear there’s enough of a news junkie audience to sustain [those] companies by consumer Internet standards,” the source says, a predicament that likely also impacts its competitors, such as Flipboard. “It’s also not clear that even a beautiful, relevant product can tear people away from social networks as the primary distribution channel for that kind of content. People turn to Twitter/Facebook for reasons stronger and stickier than news.”

Looking at the downloads for Prismatic over the last two years, according to App Annie, the company started from a very healthy position in the top 10 of iPhone news apps in the U.S., but over time its iPhone app has plummeted, and as of February 28 was at 758. Its overall ranking never managed to break 200. 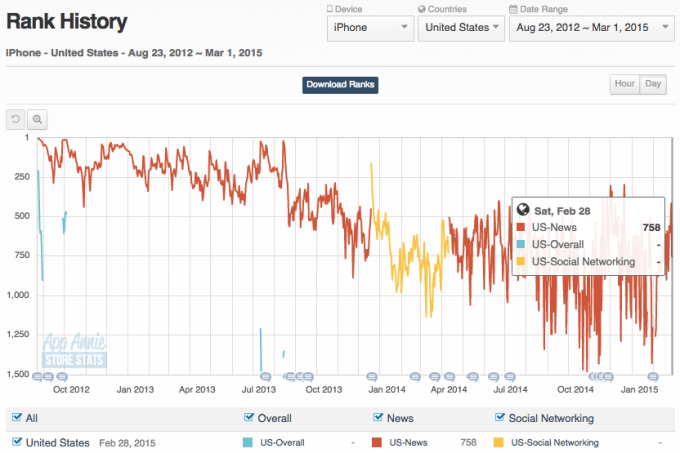 No sources have mentioned that Prismatic could raise money instead, although of course this might end up being a possibility, too, despite the lack of traction on the current product. As we understand it, several employees have left the company in the last period, in addition to the co-founder. They include Jenny Finkel, who was its head of engineering and now works for Mixpanel.

On the other hand, the potential for the technology that Prismatic has built is to become part of a bigger business that could either use it for recommendations of other things in addition to — or instead of — news content. For example, it could be applied to product searches, more generic web searches, or to discover apps, music or other content. Those are all areas where a platform company like Microsoft — or indeed the others that have eyed up Prismatic — all want to up their game.