IFTTT made its name in the tech world with a platform for “Recipes” that people could use to automate online and mobile actions in and between different apps and services — developer mechanics, simplified. Today, IFTTT is unveiling the next step of its strategy to take its tech more mainstream.

It’s launching three free new apps — Do Button, Do Camera and Do Note — that will respectively let users trigger up to three actions each to make connected things work; and share photos and post notes to various other applications. Along with that, it’s rebranding its original app, which will now be called a more simple “IF” instead of IFTTT (which stands for “IF This, Then That”).

(Three is the magic number today for Recipes in the Do apps, but longer term, you will be able to add more than three, the company tells me. That will likely be one of the ways that the company monetises the apps in the future.)

Linden Tibbets, who co-founded IFTTT with his brother Alexander and Jesse Tane in 2011, tells me that while IFTTT has been a hit mainly with developers and enthusiastic tech early adopters — who are now collectively closing in on cooking 20 million Recipes each day — these latest moves to make the tech more accessible to more consumers has always been on the cards.

“This is what we wanted to do all along,” he says. “We thought the consumer side of our products — where all the coding would be in the background and all the action in the foreground — would evolve very drastically.”

It was also part of the rationale behind the startup raising a large round of funding last year — $30 million from Andreessen Horowitz and Norwest Venture Partners, taking the total raised by the company to $38.5 million.

Part of IFTTT’s growth, and the funding it’s received, has also been about IFTTT adding more objects to interconnect, beyond simple non-physical apps to objects in the Internet of Things — where even the most mundane products are now being transformed into dynamic “hardware”, connected by wireless networking and controlled by apps.

That’s led the company to building more bridges with consumer electronics companies, and spending more time at places like CES. In fact, I met up with Linden after he appeared on an IoT panel at the Las Vegas show this year. That’s when I first saw demos of the early builds of the new Do apps that are launching today.

Do Button, the app that is illustrated in the picture above, is essentially the embodiment of how IFTTT is stepping into the world of connected devices. With smart devices getting manufactured by a slew of different companies, the playing field is still wide open for a company to create a simple platform for consumers to control all of them. (And IFTTT’s not the only one trying. Google, now with a lot of skin in the game by way of its Nest and Dropcam acquisitions, will likely want to play a role here, and so will smaller startups like Zuli.)

In the case of Do Button, you can do things like set your Nest Thermostat to a particular temperature and control your Philips Hue lights — as well as record your time and location in Google Drive. The idea here is that, yes, you can already do all of this — but in individual apps. Now you can do it in one place, and even simplify that further by adding a Do Button widget into an Android home screen or into an iPhone Notification Center. 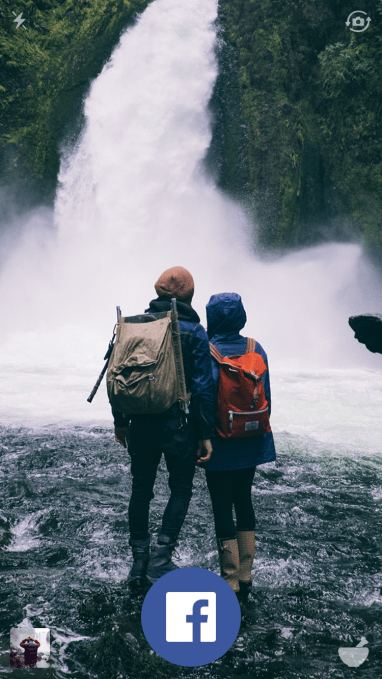 Do Camera takes that another step further by focusing specifically on one of the most-used features of smartphones — taking pictures. In its first version, this is basically One More Photo App for your smartphone, but with a twist: it lets you create actions for where you might like to share pictures.

This is especially handy if there are specific places or people who you like to regularly share images with, since the sharing features on most other apps will only take you to a more generic location. So, for example, instead of simply sharing an Instagram photo to Facebook, you can now either import that Instagram picture, or take one directly in Do Camera, that you can file directly to a specific album that you have created. That album might be set with very specific privacy settings, or simply there to keep yourself more organised.

The last of these, Do Note, is described by Tibbets as “your command line” for everything. To me, that sounds quite geeky, but it’s really more useful than that. Essentially it’s a more dynamic notepad, where you can send one line to a particular to-do file in Evernote, and another to Twitter, and another to a Google Calendar to create an event. 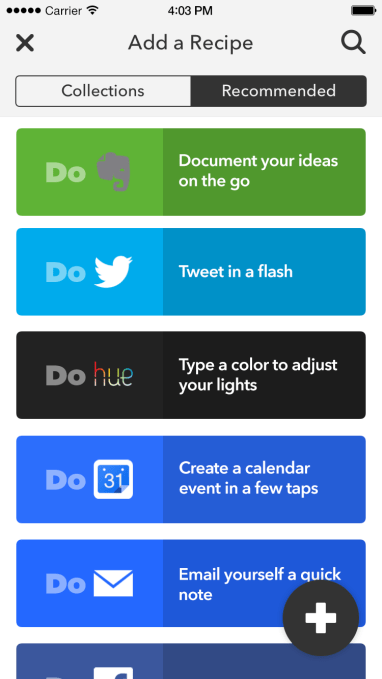 As with the other two apps, you are a bit at the mercy of those who are out there creating Recipes for what kinds of things you can do, and the idea will be that as more Do-friendly Recipes are created, you will have more choices of what you can add in to customise your own app-dashboards.

That’s where the new IF Android and iOS apps come in. Users, and developers, can create new Recipes using the apps.

And so, while IFTTT looks for more consumer traction, it continues also to court developers that will be attracted to its critical mass.

Today, the 20 million Recipes that are run daily work out to 600 million Recipes run each month, Tibbets tells me. “We are already moving massive ammounts of info,” he says. The company also now already has some 170 public channels for organising the Recipes for different products. Tibbets tells me that over half of those Recipes have been built by third-party developers. That’s a proportion IFTTT hopes to see growing as a sign of it sticking.

Interestingly, although the Internet of Things turn is somewhat new for the company, it’s already seeing quite a lot of activity, with 20% of the Recipes related to “connected devices of some kind,” Tibbets says. “That has put us in a phenomenal position to really build the consumer side of the business.”