WeTransfer, the Dutch cloud-based web and mobile service that lets users send files to each other that are too large to send as email attachments, has raised $25 million, the first and only round of funding raised by the Amsterdam-based startup since opening for business in 2009.

As a bootstrapped company, WeTransfer has picked up 25 million monthly active users that send 70 million files each month. It will be using the new cash injection to expand into more markets, specifically the U.S. The raise came from a single investor, Highland Capital Partners Europe, and values WeTransfer at between $100 million and $200 million.

WeTransfer competes with the likes of Dropbox, Box, Hightail, BitTorrent Sync and other file-sharing services that offer individuals and businesses a platform to share and transfer large documents, media files and other content that are too big to send by email.

It positions itself a bit differently, though: more like their arty, laid-back Dutch cousin than a direct competitor, with a random selection of colorful wallpapers featuring monsters and other pictures in the background of an otherwise very simple user interface. No banner advertising and no requirement to register with the service to use it. “Transfer with style. Your style,” one homepage ad for the company itself reads. (You refresh to see more pictures.) 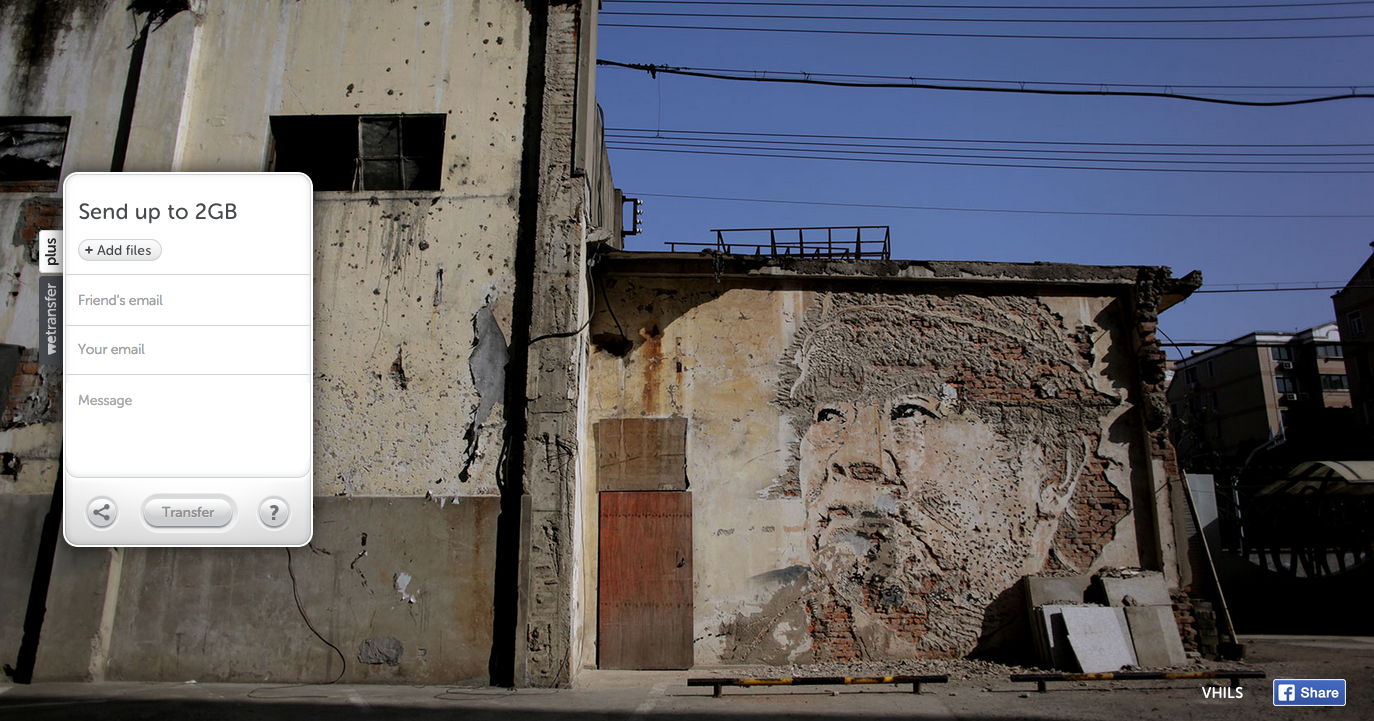 Also unlike many of these, WeTransfer says that it’s been “consistently profitable” since 2013. This is on a relatively modest base at the moment: the company has told a Dutch publication that annual revenue is $23 million (€20 million), with sales doubling in the last year.

“Funding isn’t something we proactively looked for, but having been approached by a significant number of investors from across the globe in the past two years, we realised there were bigger opportunities to grow as a service and a brand,” said CEO and found Bas Beerens, in a statement. “When HCPE approached us, we had an instant connection. In addition to supporting us with funding, HCPE will offer advice and expertise to help us achieve our goal to build on WeTransfer’s brand and offering.”

Today, WeTransfer makes its revenues from two main streams: 40% comes from advertising that runs alongside its free service, which lets users send up to 2GB online, or up to 10GB via the mobile app, for no charge. The remaining 60% comes from its premium product, a service that costs €10 ($11) per month and lets users customise their URLs, send files of up to 10GB online, store up to 50GB and password protect their documents. Advertisers and customers include Google Chrome, Shutterstock, G-Star Raw, Vodafone and Qatar Airlines.

The idea will be to continue this basic formula, but also take the cash injection to add more features and to forge partnerships to raise its profile of its brand in the U.S.

Some of that money has already been put to use. WeTransfer sponsored an opening party for the Grammys this year. And, borrowing a page from the Rovio book of “anything goes” marketing, the company seems to be working on something called WeTransfer TV, “a TV program based on the background pictures and videos” that the service shows to free users.

I guess that’s one way of getting people’s attention. Its new investors seem to like the formula, too.

“We are delighted to have invested in WeTransfer. The team has bootstrapped an amazing company, built around a product that creative professionals and consumers worldwide love to use,” said Tony Zapplà, a partner at HCPE. “We look forward to working with them to continue making WeTransfer a fun, productive and intuitive experience, which wows its users every time.” Both he and another partner, Irena Goldenberg, are joining WeTransfers’ board with this round.