A new company called Parent Co. is launching today, backed by $1.8 million in angel funding, with the goal of creating a line of digital products designed to meet the needs of modern parents. To kick off its launch, the company is also announcing its acquisition of Notabli, a private, social networking app that allows parents to save their child’s moments, including photo, video, audio, milestones, and more.

The Notabli app, which becomes Parent Co.’s debut product, was originally founded in 2012 by a team of parents who wanted a more private place to save and share photos and videos outside of traditional social media, like Facebook. It’s one of now hundreds of private social networking apps with a more niche focus, including several in the “parenting” space like 23snaps or Lifecake, for example.

As a result of its acquisition, which actually took place last year but is only today being formally announced, Notabli’s co-founders Jory Raphael and Jackson Latka are joining Parent Co. as Lead Designer and Head of Product, respectively. Deal terms are not being disclosed.

With the support from its new owner, the Notabli app has been expanded from an iOS-only product to the web, where it’s now available on the desktop in beta at Notabli.com. Here, parents can use the new site to save and organize their child’s special moments, in a clean and simple interface featuring posts others can view, comment on and like, and soon, turn into photo prints and photo books, too.

Also arriving in the near future is a feature that will allow you to import moments shared to other social networks in the past. 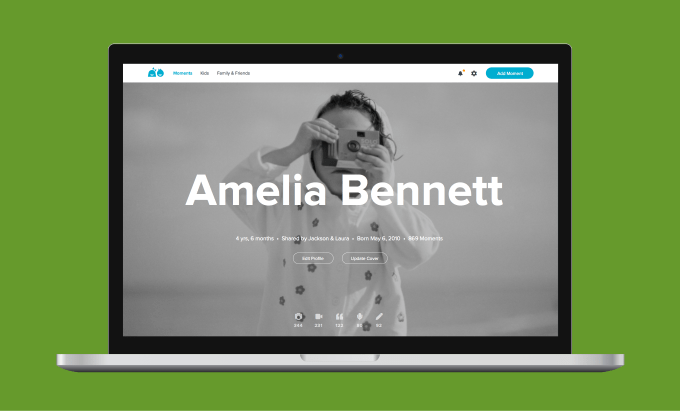 Online, the site offers tools for searching, filtering through, and organizing the various moments, as well as an export option and the ability automatically backup content to Dropbox. For others in the family who don’t use the company’s mobile app, Notabli can send out email updates instead.

O’Leary says Notabli was an “easy choice” for Parent Co.’s first product, because it contains all the familiar elements of social media, but doesn’t require much in the way of behavioral change on the part of parents. “…But the end result is different because parents have built an amazing archive of their kid’s best moments,” he says.

The now fourteen-person team is based in Burlington, Vermont, and is working to develop an Android version of Notabli at present. O’Leary also tells us Parent Co. will expand to include additional digital tools and services that “make life easier” for parents and families in the future.