Shutterfly, the publishing company that operates a number of online and mobile brands associated with personal photo printing, is now shutting down Treat, its online and mobile greeting card service. The Treat application first launched back in April 2012, and later in the year arrived on mobile devices before getting an overhaul in 2013. The app allowed users to customize greeting cards on their phone, which they could then send to recipients via postal mail.

Treat competed with a number of other apps, including Red Stamp and Sincerely Ink, for example, and for a time, with Apple’s own Cards app, before that was discontinued. (Red Stamp and Sincerely also found exits in the months since, indicating, perhaps, there’s not enough demand for greeting card apps to build a sustainable business.) 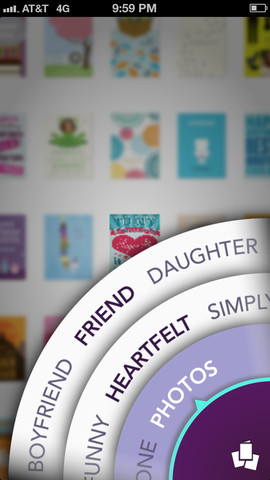 Shutterfly’s Treat app, as you may recall, offered customers over a thousand different card designs for events like birthdays, anniversaries, and holidays, as well as everyday greetings including thank you’s, congratulations, and more. Users could customize the cards using their own photos, and could even import friends’ birthdays from Facebook in order to schedule out a year’s worth of birthday cards in advance.

But today Treat customers received notice via email that the service, which also exists as an online destination, is soon to be no more. As of March 17, 2015, Treat will discontinue service to all customers and will point visitors to the main Shutterfly.com website instead. Here, says the company, customers have “more personalization and gifting options” than with Treat. The app will also be shut down at this time, notes Shutterfly.

A website FAQ goes into a little more detail, informing users who had scheduled deliveries that any cards that were set to be mailed after April 10th will be sent directly to their home address, not the intended recipient, as customers will now be responsible for mailing the remaining cards themselves.

The closure means that Shutterfly no longer has a mobile greeting card service, at least for the time being. While users can buy greeting cards on the company’s website, the Shutterfly app doesn’t include this option – it offers prints, photo books and other photo gifts, but not cards.

It’s not surprising to see Treat closed down – the app was barely used, it seems. According to App Annie, the app was lowly ranked in the App Store: it’s currently at #1,118 in the “Photo and Video” category, indicating very little demand.

While the Treat one-to-one card experience delighted our customers, it failed to attract a large enough standalone user base and the cost of acquisition was too high relative to the ARPU (average revenue per user).