A company offering a full graphic design on demand service, SketchDeck, has raised half a million in new funding after completing nearly 2,000 projects, some of which have been as simple as a PowerPoint presentation and others which have been as complex as a complete company rebranding. The funding comes from Y Combinator, Dharmesh Shah (HubSpot CTO), Michael Siebel (founder at Socialcam, Justin.tv)  and other angel investors.

When we first looked at SketchDeck last spring, the Mountain View-based startup was focused on turning around slide decks for clients in just a day’s time. Using design staff overseas, SketchDeck let you dump your notes or raw slideshows on SketchDeck’s team, then wake up the next day to have them transformed into beautiful presentations.

In addition to the convenience of the service, a big selling point was the access to professional design at freelancer prices (or less). For instance, pay-as-you-go pricing for presentations started at as little as $5 per slide for the most basic designs.

Since last year, the company has been focused on growth and expanding its product to include infographics, marketing emails, white papers, e-books, posters and even website and app designs. To date, SketchDeck has worked with over 400 clients, says co-founder and CEO Chris Finneral, and eight of those are now using the service as its full-time, outsourced design team.

SketchDeck has also moved away from using low-cost designers based in India, and now contracts with a number of freelancers in the U.S. and elsewhere. This has raised SketchDeck’s pricing a bit. Finneral says the typical project is around the $400-$500 mark, for example. That’s still a good deal, he insists. 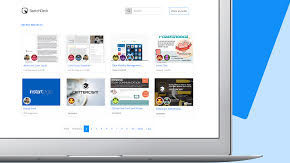 While the company can still turn around smaller projects in 24 hours as before, some of its work takes a little longer. However, the value proposition is still based around convenience and speed, the CEO says. It’s still easy to start a project on SketchDeck – a process that takes around five minutes – and to offer feedback. SketchDeck can then whip out design work quickly. For instance, infographics arrive in 24 to 48 hours, and the team even implemented A/B testing with two designs on a client website in just two days.

SketchDeck is still a small group of four full-time, but has grown to include 50 designers who work on its projects. These freelancers are paid by the hour for their time, and checks are cut every two weeks – allowing some of them to rely on SketchDeck for a large portion of their income. For some designers, working with SketchDeck may be preferable to finding work via crowdsourced marketplaces like 99designs because they don’t have to do spec work to get the job.

With the additional funding, Finneral says SketchDeck is focused on growth in 2015, with the goal of growing 10x this year. It will hire engineers to help build out its product and also expand its sales and account management teams in order to sell to larger clients.