Another management change is underway at Google: TechCrunch has learned that Alan Eustace, a longtime Google employee and its SVP of Knowledge — and also the current world-record holder for making the highest-altitude free-fall jump — is leaving the company. 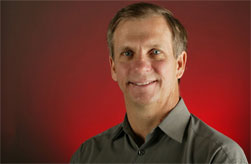 Eustace is not departing for another role elsewhere but is retiring, from what we understand. The news was conveyed to staff by internal memo, and it’s not clear who will be taking over his role and/or if there are any other departures.

We’ve been told by a source that Google has been working through a larger reorganization of its business. Eustace had been looking to leave for a while and seized the moment.

We have reached out to Google to get more details.

Eustace joined Google back in 2002 as a transplant from HP. Joining the company when it was four years old, he started out first as the SVP of engineering. In 2011, he became the SVP of Knowledge, a newly created division that included search at the time. These days, search has its own SVP-level executive, Amit Singhal.

Things have been moving around at the executive level of Google in the last several months.

In October last year (literally the same day Eustace set his skydiving record), several divisions of the company were centralised under Sundar Pichai, including Eustace’s research operations. Shortly after that, Android pioneer Andy Rubin left the company. Other research leaders who have left Google include Sebastian Thrun, who helped found Google X to develop “moonshot” products and technology. He stepped away from his VP and Fellow roles at the company last September to focus more on his education startup Udacity.

Google is a company in transition, with the company’s widened focus today on areas like mobile, video, driverless cars, cloud-based services like maps and other apps, and connected home products, expanding its reach it well beyond the search business that was its main operation when Eustace joined in 2002.

Google reported earnings last quarter that missed analyst expectations, on the back of higher expenses and a decline in average cost-per-click. Yesterday, we reported that its search market share in the U.S. — excluding mobile — had dropped below 75% amid gains from Yahoo. The company’s search deal with Apple — as a default option in Safari — is also understood be up for renewal this year.