Across the web, top tech companies, including also YouTube parent Google and TiVo, analyzed how well the big game and its popular TV commercials performed on their networks, revealing trends related to the content and other details about how people watched and engaged with others during the game.

This year, Facebook launched a real-time experience on its site, offering fans a dedicated page where they could see, among other things, posts from friends and others in their network, photos and videos from new outlets, posts from the NFL and team players, and reactions from others around the world in the Facebook Super Bowl page’s “live feed.”

This site appears to have helped fuel a big jump in user engagement, the company reports today. Last year, more than 50 million unique users joined the conversation on Facebook. This year, more than 65 million participated.

In total, users shared 265 million posts, comments and likes, which soared during the game’s final moments to more than 1.3 million unique “People Per Minute” who were posting, commenting, and liking content related to the Super Bowl, says Facebook. 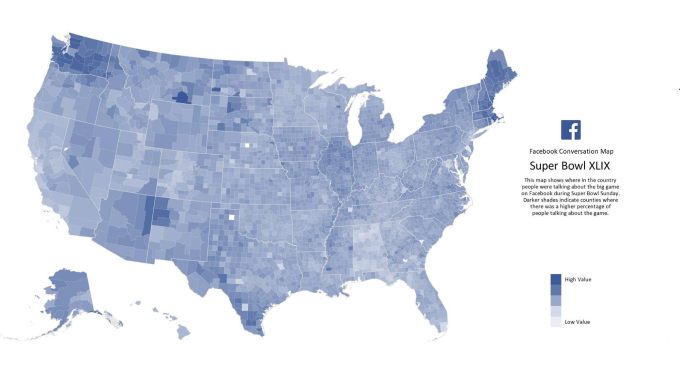 That “People Per Minute” metric is something Facebook examined in more detail this year, as competition with Twitter heats up around real-time social conversation.

For the 2015 Super Bowl, Facebook also revealed a number of related stats, including the game’s “top social moments,” “top five states,” “most mentioned players,” and more.

They are, as follows:

Top Five States (Where Level Of Conversation on Facebook Was Highest)

On Twitter, the growth and engagement around user conversations wasn’t quite as dramatic as on Facebook. However, the company announced it saw a solid 28.4 million tweets about Super Bowl XLIX yesterday, setting a new record for Super Bowl tweets, even if only a slight increase over last year’s 24.9 million tweets. However, in 2013, Twitter saw 24.1 million tweets – so at least this year’s jump in tweets is larger than before.

That being said, with the Super Bowl being more of a U.S. obsession, the tweet count alone didn’t break a record for most tweets ever, or even the most sports-related tweets. (For comparison’s sake, the World Cup’s finale saw 32.1 million tweets.)

Twitter also revealed the moments that generated the biggest peaks in conversation during the live telecast, measured in tweets per minute (TPM):

The company analyzed top players, too, and it offered an interactive map of the U.S. showing how the game played out on Twitter. 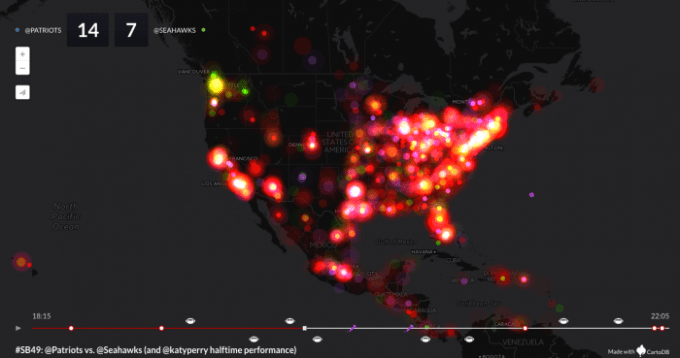 Google, meanwhile, reported on what Super Bowl fans were searching for across the web and what they were watching on YouTube. Users on Google were searching for content from their second screens, whether those were laptops, tablets or smartphones, in record numbers.

“People watched more game-day ads and teaser videos on YouTube than ever before,” the company announced this morning on its official blog.

This year, YouTube also rolled out its first-ever halftime show to keep users engaged further with its network during the big game, and it showcased all the Super Bowl ads on its “AdBlitz 2015″ website, which allowed viewers to watch, vote and share their favorites.

According to the data released this morning by Google, people this year spent nearly 4 million hours watching game-day ads and other teasers videos on YouTube, up from 2.2 million hours last year.

Elsewhere, Google searches reflected users’ interest in getting real-time updates from the game, as well as their desire to get certain questions answered. For example, many asked Google “Why did John Travolta call Idina ‘Adele?’” as well as “How long will it take Idina to sing the National Anthem?”

They also searched for top players, including Tom Brady, Marshawn Lynch and Russell Wilson, and for details on thehalftime show. At one point Katy Perry’s performance appeared to reference NBC’s old “The More You Know” PSAs. Google says that searches for the phrase “the more you know” then spiked 190x for 10 minutes afterwards. 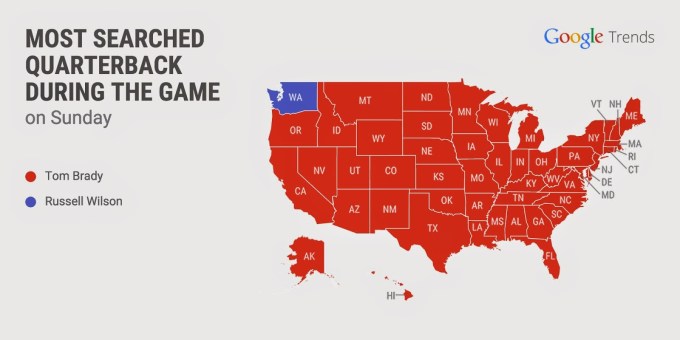 Google’s YouTube division didn’t release details on how well its own halftime show did, which was created with help from 25 YouTube creators. But the videos posted on AdBlitz’s channel pulled from the show have anywhere from 1,600+ to 10,600+ views at present.

It seems, perhaps, that YouTube users were more interested in watching the ads. The company ranked those commercials that were most popular on its network, which revealed that Anheuser-Busch won the two top spots:

TiVo Ranked The Ads And Moments, Too

Finally, TiVo offered its own take on how the ads performed, gathering its data not from online plays but rather from its viewership data based on actual commercial retention relative to overall program viewership.

This year, notes TiVo, there were fewer beer ads, but more insurance and movie ads.

By looking at these numbers, the list of popular ads ranked a little differently than YouTube’s: 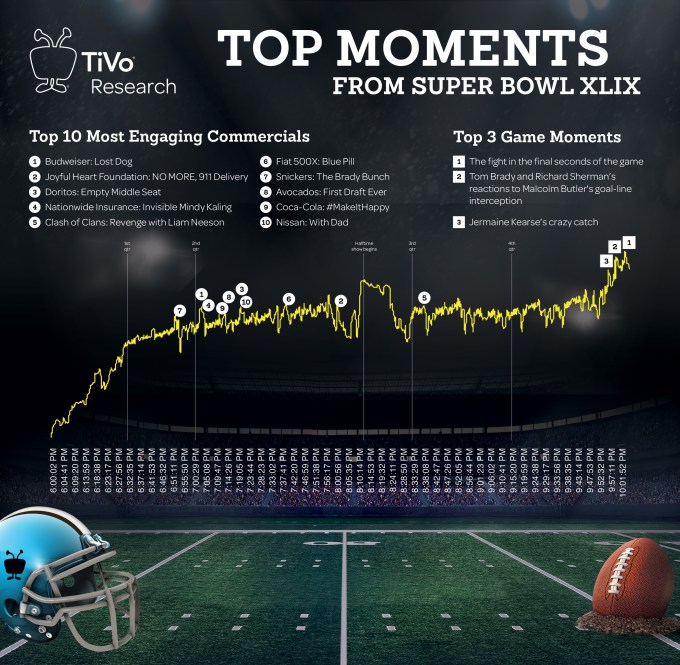 TiVo also analyzed the top re-watched moments from the game, and the halftime show, finding that the latter’s viewership numbers exceeded that of the overall game for the fifth year in a row. The top game moments, meanwhile, says TiVo were as follows: “(1) 10:04 p.m. ET the fight in the final seconds of the game, (2) 10:00 p.m. ET Tom Brady and Richard Sherman’s reaction to Malcolm Butler’s goal-line interception and (3) 09:56 p.m. ET Jermaine Kearse’s crazy catch.”