It probably hasn’t passed you by that there are scores of dating apps promising to help singles find someone to go on a date with. Whether it’s via algorithmic matching (OkCupid), or fleeting proximity (Happn, Grindr), or photo-sharing (Dattch), or less moveable stuff like mutual friends (Hinge), age and interests (Tinder), or by putting women in the dating driving seat (Antidate, Bumble). Dating services in lucrative markets such as the U.S. and the U.K. are now so abundant that singles of all stripes and skews are spoilt for matching choice.

Which of course brings its own first world problem: singles are spending a whole lot more time swiping potentials than actually going on dates. Nothing says ‘plenty more fish in the sea’ like firing up your dating app of choice of an evening. Just add a beverage of your choice…

Which brings me to Couplelizer: (yet) another debutante dating service but this one taking a slightly different approach vs the existing playing field in a bid to stand out. As well it must. Specifically it’s aiming to incentivize and accelerate the ‘going on a date’ component of dating, rather than building a business out of encouraging singles to spend their time indulging indecision by vicariously checking people out and checking out who visited/liked their dating profile.

“We think that there are too many sites that want users stay online and keep buying subscriptions instead of actually going on real dates,” says co-founder Rokas Vachul. “We wanted to fix it, and encourage users to go on a real dates as fast and easy as possible. Also we do not believe that matching engines can find you a perfect match. Most of users making their profiles to look better than actually it is, so what’s the point?”

Couplelizer, which is currently live in the U.S. and the U.K. after a soft launch last November, asks users to take a selfie (via their webcam/phone camera) to ensure an up-to-date profile picture, and provide their zip code/post code (to power matching proximity, although users can manually tweak this to reset to a city centre location etc if needed). Users are also asked to specify their sexual orientation. And that’s about it on the data input front — bar name, age and a few words of self description for the profile.

Point being, says Vachul, to focus on encouraging users to go out on actual dates — not on crafting subtle prose to woo a match. “We think the main thing is how the person looks like, so best way — newest selfie and few words about yourself. Everything else about the person you will find out when you meet!” he adds.

While that’s a nice idea, it does risk encouraging a certain superficiality — given users are judging whether they want to go on a date based (mostly) on looks alone. But, well, that’s probably true of most dating services… And Couplelizer does open up a chat feature when you get a dating invite so you can have a bit of back of forth with the invitee to determine whether the prospective date has potential. Or sounds like a total dud. 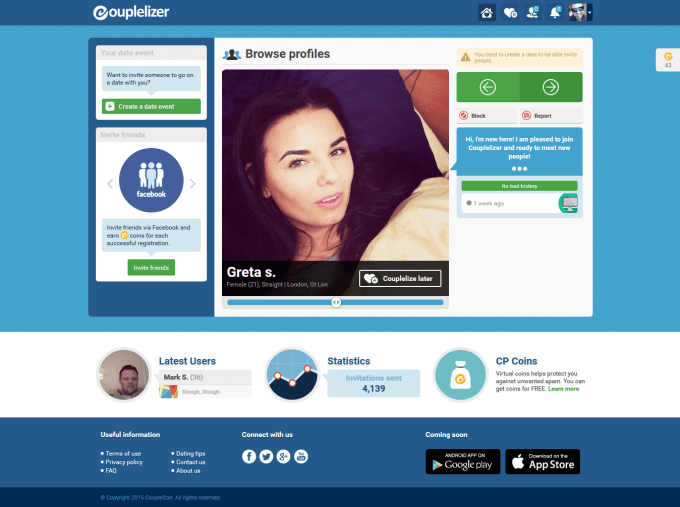 Users can wait around to be invited on dates to see who’s into them. Or they can create date events themselves — selecting the date, time and choosing a public place from the nearby list — and then selecting which other members are sent an invite, by browsing nearby profiles.

Invites include a dynamic expiry time to encourage snappier decisions — so less vicarious hedging. In theory. The ante is further upped by another gamification element which means the first person to accept the invitation gets the date. Ergo, you snooze, you lose.

What about the issue of no-shows? Couplelizer is relying on user reviews to discourage that sort of tedium — so if a date doesn’t turn up they can expect to get a negative review from whoever they stood up. Which will in turn make it less likely they get asked on future dates. Add to that: get too many bad reviews and you’ll get booted off the service.

Couplelizer is the brainchild of a bootstrapping Lithuanian developer duo, currently based in Europe but with plans to move to the U.S. Hence they’ve soft launched as a web service, while they test and tweak their ideas in the dating pool before shelling out more of their own money on building native Android and iOS apps. Those are likely in a “few months”, says Vachul.

“From the beginning our plan was to have both, website and app. So from the developing perspective it is easier first to make the base of the website and then start developing app,” he adds, noting that the site as is will still work fine on mobile devices.

At this nascent stage, Couplelizer has around 2,000 registered users, who have sent more than 4,000 invitations so far. A minority of those invitations — some 579 — have been accepted. And the majority (74 per cent) were sent by men. Male users are also, unsurprisingly, more likely to have a date event rejected. C’est la vie guys.

The service is free to sign up to, and there are no adverts, but there’s a virtual currency mechanism to charge for dating events, and for the ability to chat with other users before you’ve invited them on a date (chatting is unlocked as free after you’ve sent an invite).

The virtual currency is also being used to encourage users to do some viral marketing for the service — so you are rewarded with Couplelizer coins if you ‘socialize’ it on your feeds. In future Vachul says the startup sees plenty more ways to monetize usage via the virtual coin, by — for instance — allowing users to buy currency if they want to send more date invitations, rather than requiring them to keep earning enough coin to fund their date invite habit.

It will also be used as a way for users to verify their identity — i.e. those who have purchased coins will get a verified badge on their profile (as a sign of their desire to actually go on dates, presumably — since they will have shelled out some actual cash).

Another planned paid feature will let users publish a forthcoming date event in a public news feed which other interested members can then put themselves forward for — with the invitee getting to choose whether they want to accept this volunteer dating candidate or not. Plus there will be the inevitable “payable stickers for chat”. After all, romance in the modern era demands copious heart emoji… <3 <3

Other ideas are still being kicked around by the team but might include the ability to buy a date dinner in a suggested restaurant using Couplelizer coin, says Vachul — presumably as added incentive that someone you want to take on a date takes up the invitation.

Beyond getting date-loving singles to pay for its virtual currency, additional revenue ideas for the team are focused on the potential for looping venues into the proposition — so, for instance, having bars and restaurants pay for better placement within the list of suggested nearby places where a date might take place.