Tinder’s success has brought a swell of clones to the seas of mobile dating. But Hinge founder Justin McLeod believes romance comes in many forms, and there’s plenty of room for his iOS and Android apps. In fact, he sees people using both Tinder and Hinge, but with distinct intentions.

At first glance, they look quite similar. Both give you one potential mate at a time that you can swipe right to approve or swipe left to dismiss. If two people approve each other, they’re allowed to chat within Hinge.

But McLeod explains “When we ask our users, they say they use them differently. ‘I use Tinder when I’m out and about or bored or want to mess around, and Hinge is where I meet the people I want to date.'” Hinge only shows you matches that are friends of friends, so you have a trusted connection that implies your date isn’t a psychopath, and you get to see info about their work and education upfront.

“We’re the next generation of dating site” McLeod says, likening Hinge to Match.com, eHarmony, and OkCupid but mobile-first. Just like those desktop giants, Hinge uses a matching algorithm to intelligently show people mates they’re likely to be compatible with.

For example, Hinge pulls your Facebook information to present you with people who went to the same kind of college (ivy league, state school), or similar type of job (tech, finance, politics). But it also goes deeper and connects people across these boundaries if it notices female lawyers dig male bankers, or that Harvard guys seem to hit it off with Boston University girls.

While Facebook maps the social graph of friendships, and Twitter lays out of the interest graph of what people care about, Hinge wants identify the hidden threads the pull us towards people we want to date. This “Romance Graph” as I call it, gives Hinge a better success rate and a stunning retention rate. 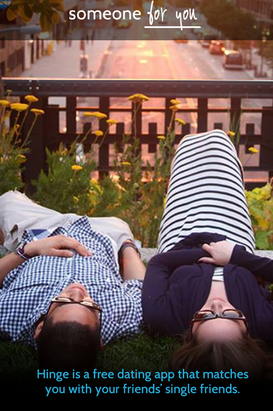 Since expanding beyond its home city of DC in August to New York and Boston, Hinge has doubled its user count to 60,000 yet maintained its stickiness. McLeod says it still see about 85% of people who download Hinge as active a week later, and 75% a month later.

Hinge still has a long uphill battle. First of all, Tinder may not be as easy to write off as a hookup app as McLeod says. While Tinder doesn’t reveal user counts, its founder Sean Rad said on stage at TechCrunch Disrupt Berlin that his app sees 350 million swipes and makes 3.5 million matches per day. Communicating that a similar looking app is for something different could be tough, and people may look for true love on Tinder even if that’s not what it’s best at.

Hinge will need traction to make good on its new investment. That means fighting for users in a crowded dating app market that includes newly revamped and rebranded Down (formerly Bang With Friends), as well as mobile efforts from stalwarts like OkCupid.

Finally, mobile is built for instant gratification. Tinder delivers that by optimizing to show you people who were recently online and might be ready to meet soon. Hinge wants to make the most accurate matches possible, but that means it might take a while for your crush to sign back on and rate you back.

As avid (and single) female dating app user Naynerz tells me after she said Hinge has some problems:

@JoshConstine Hinge doesn't provide users with instant gratification as much as Tinder does, with real-time or instant matches.

However, she also notes that Tinder “is full of fucking weirdos”.

With $4 million, Hinge has some ammunition to fight off competitors and pay for growth. The money will help the startup break into new cities, and revamp its apps. McLeod concludes “Dating sites used to take the old newspaper classified models and put it online. We’re taking the really old model of meeting through friends and modernizing it for mobile.”

Hinge is available for iOS and Android, but has only officially launched in Washington D.C., New York, and Boston so you won’t get matches if you’re outside those cities.