Mobile analytics provider App Annie, the market leader in the app measurement business today, is out this morning with its annual report that takes a look back at the app trends that defined the past year. The report includes a look at app category growth, like the expansion of mobile messaging services, mobile video streaming, “sharing economy” apps and more, as well as growth of the app stores and various geographies.

App Annie’s data is pulled from the company’s platform, which today includes over 700,000 of the top mobile applications, and is used by customers, including EA, Google, LinkedIn, Microsoft, Line, Samsung, Tencent, Universal Studios, and dozens of other big names in the industry. To date, the company has tracked over 83 billion downloads and $25 billion in gross revenue, giving it insight into the trends and fluctuations that impact the mobile application business.

The full report also includes a long list of the top apps and publishers by country, as well as the top countries and categories for both the iTunes App Store and Google Play.

While we’ll leave it up to you to pursue that data in more detail, it’s worth pointing out how well Facebook performed in the U.S. this year – the company claimed four of the top 10 positions in terms of iOS and Google Play downloads with Facebook Messenger (No. 1), Facebook (No. 2), Instagram (No. 3) and WhatsApp (No. 10).

According to App Annie, the following were the most notable trends of 2014:

1. Google Play increases its lead over iOS in worldwide downloads 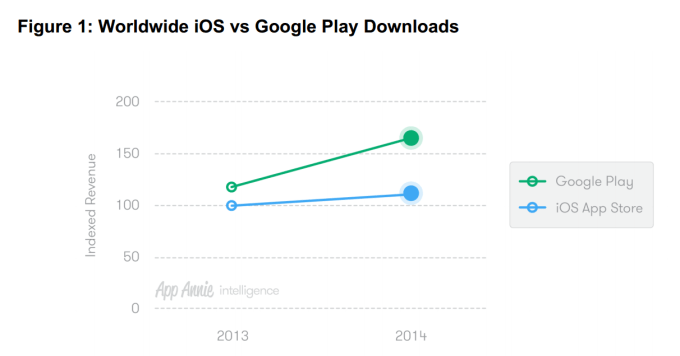 2. The app “superpowers” killed it in 2014: Japan, South Korea and the U.S. collectively generated more revenue than the rest of the world combined.

However, the firm predicts that the BRIC region, led by countries like China and Brazil, will perform well in 2015. For example, Brazil finished 2014 at the No. 2 country in Google Play downloads, behind the U.S., while China was the No. 3 country by iOS revenue, behind the U.S. and Japan. BRIC countries combined grew their revenue over 120 percent in 2014. 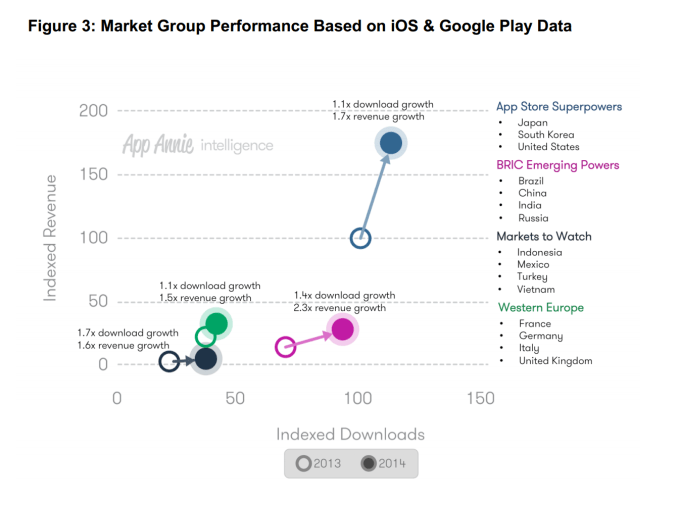 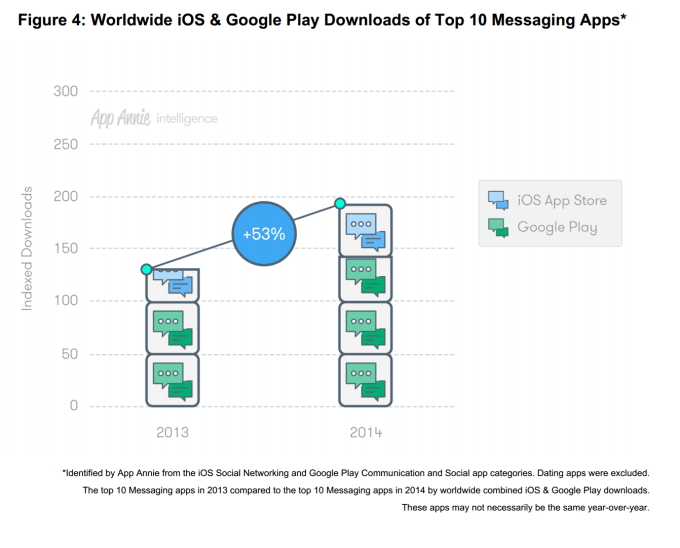 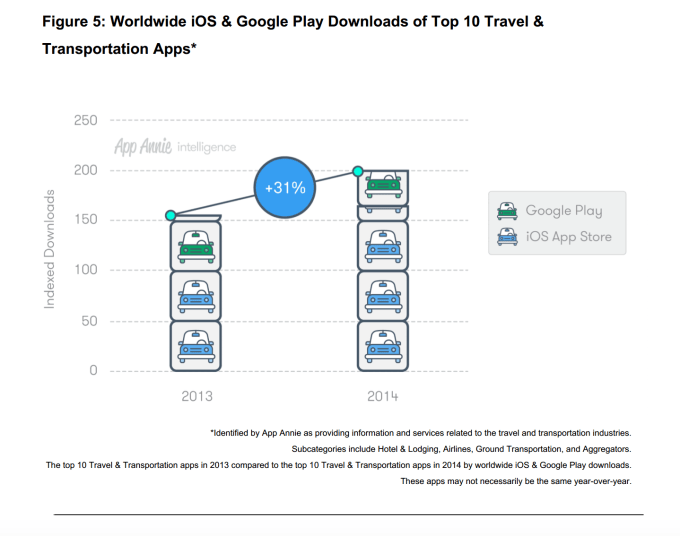 The worldwide growth was due to a number of factors, says App Annie. In China, there was increased availability of high-speed data and better plans, for example, while Netflix added more local content for its European audience. Many also gained larger screens, as networks worked toward unbundling their content, and some sports app makers like MLB.com At Bat, NFL Game Pass, and BoxNation delivered their content without third-party restrictions. 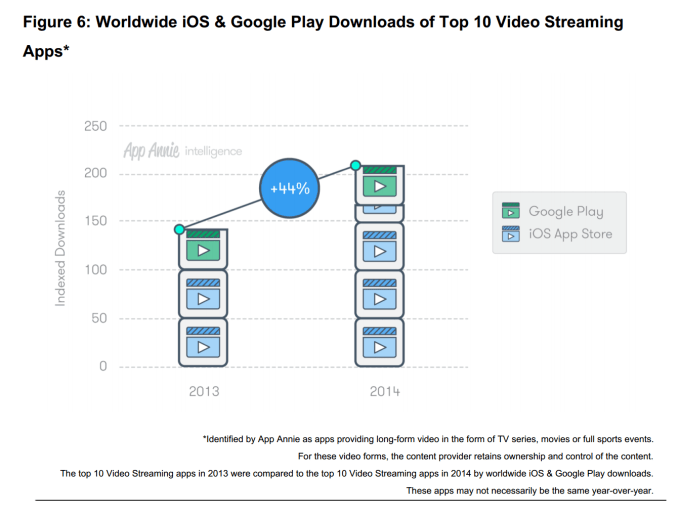 6. Hollywood came to the app stores and won.

Games based on movies and TV shows had a strong showing in 2014, with apps like Despicable Me ranking as a top 10 game by downloads last month, even 18 months after its release. 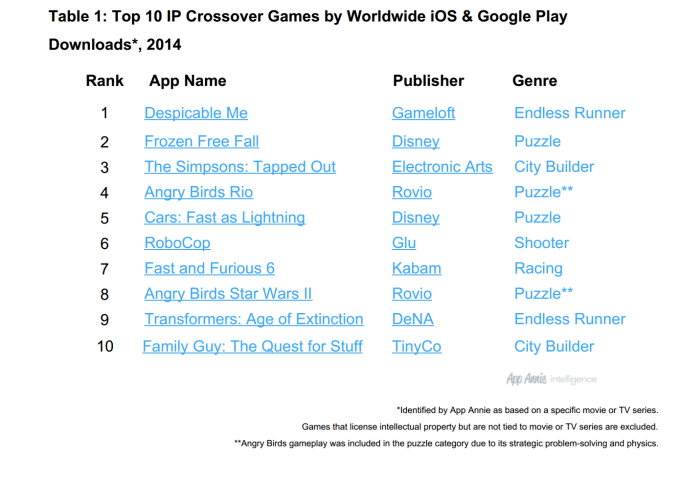 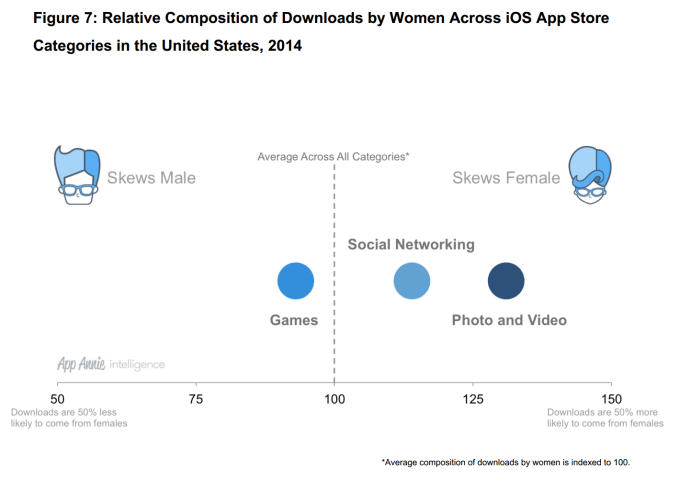 Call it the rise of the “Flappstore.” Flappy Bird and legions of successors offering simple, single-tap games with short session times flourished last year. One or more “super casual” games finished in the top 10 by monthly downloads for 10 out of 12 months in 2014. 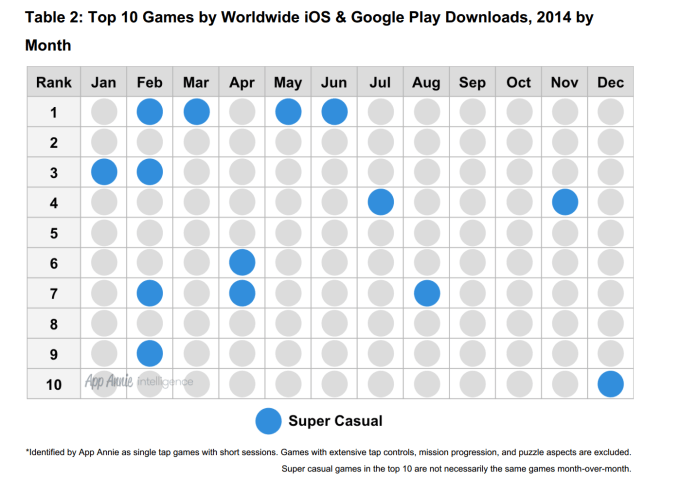 9. Music apps grew, thanks to localization

Spotify and Shazam were strong in the U.S. and Western Europe; Tencent’s QQ Music was tops in China; Palco MP3 was No. 1 in Brazil. 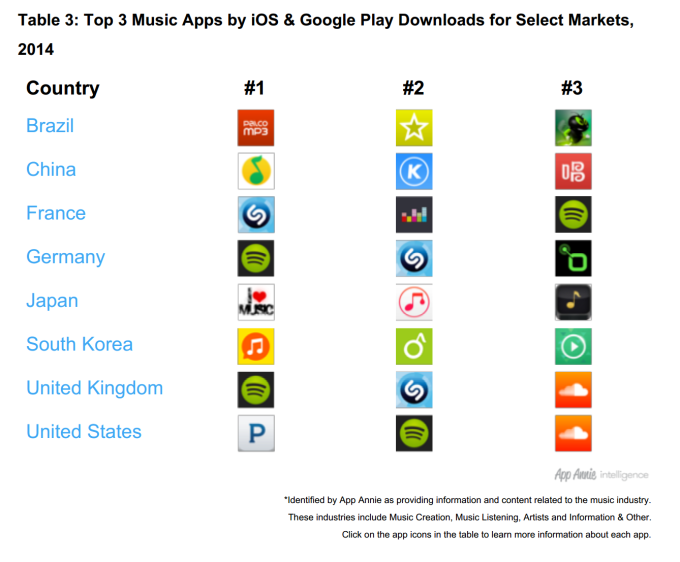