In my house, I have a small stockpile of shampoo and other health and beauty products that I’ve acquired for almost nothing, thanks to coupon stacking techniques that let you go into stores and walk out with vastly discounted products. I’m disappointed if I don’t save at least 50% of my grocery bill using coupons, if not more. But working the system to your advantage in this way takes time and effort – something a lot of people don’t have to spare.

Today, the new Favado application has launched, hoping to now cater to less “extreme” savers who just want to find great grocery deals without having to actually clip newspaper coupons and match them with local sales.

It’s a notable update for Favado, which before had been a favorite utility among the extreme couponing crowd. Its users would reference the app more as a utility for discovering the week’s sales, and the coupons required for various items or BOGOs (buy-one-get-one’s) that let you get the best deal.

For those unfamiliar, Favado, backed by Savings.com, launched not quite a year and a half ago as the company’s foray into mobile and digital couponing following Cox Target Media (Valpak owner)’s acquisition on the online savings site in 2012.

To date, the app has been downloaded 1.5 million times and today sees around 300,000 monthly active users – decent traction for an app that before primarily catered to the more niche audience of the extreme couponers.

Though clearly not a lifestyle for everyone, extreme couponing is not cheating the system or stealing, despite what reality TV may have pictured. In its simplest form, it’s just looking at the weekly deals in your local store’s flyer, then combining both a store coupon and a manufacturer coupon to take extra money off the top. When stores offer BOGOs and you have multiple copies of the same coupon –  like, from buying a few copies of the Sunday paper – you can save even more.

Some supermarkets have really embraced the trend. For example, the grocery chain Publix even posts coupon match-ups (store deals that match with manufacturer coupons) on its own website.

Still, using print coupons is just not something everyone will do, and the overall market for print is declining as well. That’s led to a new wave of digital couponing apps from startups who are negotiating their own deals with CPG (consumer packaged goods) companies. Today, apps like Groupon Snap, ibotta, Checkout 51,  Shopmium and others let consumers “coupon” at point-of-sale or after purchasing products, either by loading offers to store loyalty cards or verifying their purchases through receipt uploads.

And this is where Favado hopes to now lead. Today’s app includes an integration with Cellfire’s digital coupons, and the company is currently working on its own deals with CPGs and retailers, too.

With the update out today on iOS, the app has received a much-improved face lift, and is focused on letting users see the most popular sales in a more visual format. Now, after selecting your store, items are shown in a card-style instead of list layout, and many include product images. Here, you can see how many times that deal has been added to someone’s list in the app and you can tap a button to do the same. 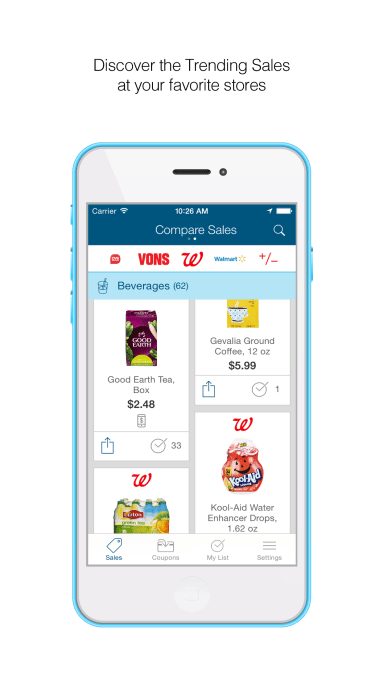 The section where users could compare deals across stores, meanwhile, has been tucked away in this release. (You have to swipe right from the main screen to get here.)

The ability to track deals and coupon pairings didn’t disappear, but it’s definitely being given a more secondary position in the new Favado as the company tries to reach a more mainstream user base of grocery shoppers.

Explains Favado GM Chris Tyler, the company found that a lot of its earlier features were turning off the more casual saver, who weren’t familiar with the lingo and techniques the extreme couponers use.

“An extreme couponer is just trying to maximize their discounts…they don’t care what they’re buying,” he says. “Our people are shopping for a family.”

85% of Favado’s users are female, and the majority are shopping for more than two people, he says. Often, these women don’t work outside the home, so saving money on the grocery bill is how they impact the household’s bottom line.

Favado’s struggle going forward is creating an app that can straddle both worlds – that of the power user and the mainstream shopper. It’s understandable that the company wants to attract a larger audience, but it has to be careful not to alienate its core users in the process. That will take some careful design-savvy, and Favado hasn’t always done well here.

The new app is out now on the iTunes App Store.  (The Android app will be updated in a few months’ time)