While there’s no shortage of mobile calendaring applications on today’s App Store, most are designed to serve the needs of office workers who need to carve out time for things like conference calls or meetings. A new calendaring app called Shifts, launching today on iTunes, is instead focused on a different demographic: those employees who work in shifts, like nurses, servers, dispatchers, plant workers and more.

The app allows users to more easily track and schedule their shifts, share their schedules with family and friends, and even estimate their monthly earnings.

Shifts was built by a company called Snowman, which was co-founded in 2012 by Ryan Cash and childhood friend Jordan Rosenberg. Snowman already has a few successful apps on the App Store, including reminder app Checkmark and a memory game called Circles, which was recently offered as Starbucks’ free app of the week.

The idea for the new Shifts app came from the founders’ friends who complained about not being able to keep track of their work schedules using traditional calendars. Because they knew Ryan and Jordan built apps, they asked them to consider building a solution just for them.

Ryan admits the idea “wasn’t all that exciting” to them at first, but they soon realized that there was a big pain point here that they could solve with Shifts.

“…After doing some research and talking to more people, we learned that – according to a recent study – one in five employees in the U.S. works during the evening, at night, or on rotating shifts,” he explains.

“Some studies say it might be as high as 30 percent of people in North America. I’m sure that data is similar in other areas of the world, too, so it seemed like there was a business case for it.”

The team set aside the work they were doing on an indie snowboarding game called Alto’s Adventure for a while, and developed Shifts instead.

Like the company’s other apps, Shifts is well-built and beautifully designed, offering a way for shift workers to easily create their own custom shift types, each configured with their own color, name and icon for easy identification. For instance, a morning shift could be indicated by a sun, a hospital shift by a red cross, and so on.

After creating a list of shift types, you can then tap on the calendar to add any shift to a given day. You can add up to two shifts per day, and the app supports rotating and recurring shifts, as well.

The app also offers a Today widget for iOS, which allows workers to view their current schedules right from the lock screen or pull-down menu without having to launch the app directly. Users can share their schedules with others via the app even if they’re not signed up to use Shifts. 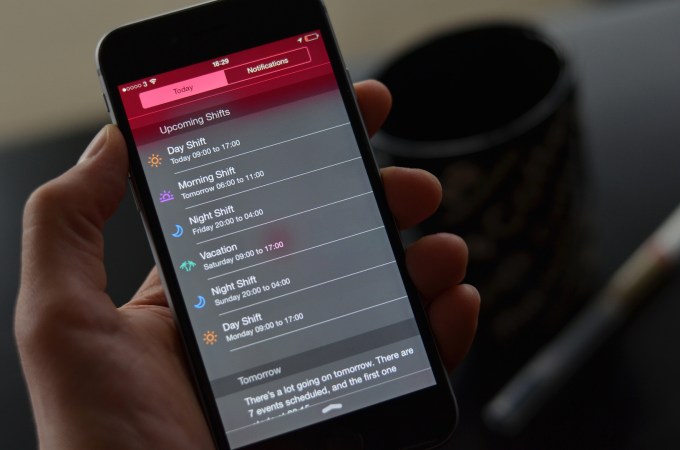 Additionally, because you can optionally enter the payment rate associated with any shift you create, the app can also help you track how much you’re expected to earn that month.

And you can overlay your personal calendar on top of the Shifts calendar right in the app, allowing you to see other important events and activities, which can help you with planning.

Prior to today’s launch, Shifts was tested among the founders’ friends and others in order to iterate on the idea and get feedback. Now that the app is live, the team is thinking about how it might expand it to work on Apple Watch, possibly via a widget, in the future.

“I suspect the Watch will play a significant role in the medical industry, and if there are a lot of medical professionals using it, we want to be there making their lives easier,” says Cash.

Also like many of Snowman’s apps, Shifts is a paid download, as the company generates revenue through its premium offerings. The app is currently available at launch at a discounted price of $1.99, but will normally sell for $4.99 when the promotion period ends.