A newer, much-debated social network called Tsu has launched a workaround to Apple’s longtime ban on “incentivized” app installs (aka pay-per-installs). Technically, users are being rewarded for creating content on Tsu and inviting others to join, but the money they earn for this activity comes from Tsu’s advertisers. That means Tsu serves as something of a middle man for companies that would otherwise want to buy app downloads, if that wasn’t in violation of Apple’s terms.

Though the addition of app install ads on Tsu is still relatively new, the service has already snagged advertisers like Twitter, Lyft, Taco Bell, Pandora, and others.

Tsu’s service, in case you missed it, launched last year.  A social network that “pays you to friend,” proclaimed The New York Times. A social network “which pays users to post,” said Re/code. Calling itself a “social and payment network,” Tsu basically pays its user base for their in-app activity and for helping it grow.

While social media marketers have been experimenting on Tsu, it hasn’t reached the mainstream. However, it recently claimed to have topped two million users. Today, its iOS app ranks #261 in the Social Networking category, according to App Annie, and on Android, it has over half a million downloads. 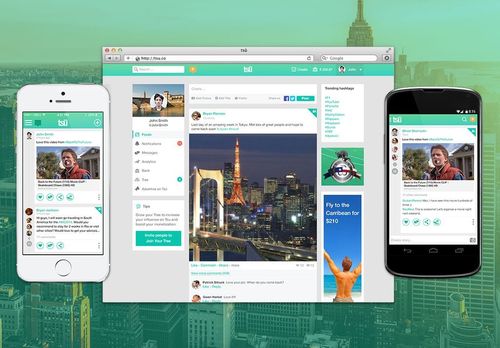 A New Take On Incentivized Installs

What’s really happening on Tsu is that it’s offering app publishers a new way to run something like incentivized app install campaigns – but without directly compensating users. That allows Tsu to operate in a gray area with regard to Apple’s ban on pay-per-installs.

To manipulate the charts, developers in years past would contract with third-parties like Tapjoy to run incentivized app installation campaigns – meaning, schemes where developers directly rewarded end users, usually with virtual currency, for downloading new applications and games.

The idea, originally, was that developers could fund new installations of their apps in order to push up their app’s ranking on the iTunes Top Charts. That, in turn, would help them grow their user base and then their bottom line. As Apple considers the velocity of new installs as a part of its ranking algorithms, a pay-per-install campaign in years past could send a new title climbing the charts. But that growth was not “organic” – it was bought and paid for. And it was cheating, said Apple in an update to its Developer Agreement, which allowed it to ban pay-per-install applications from the App Store.

And now for years, Apple has maintained its ban on blatant incentivized install campaigns. It also removed apps that functioned as alternative app stores, too, as they became a new means for similar chart manipulations.

These changes, in part, helped pave the way for the massive success of new download drivers like Facebook’s app install ads, an ad format that has now been adopted by much of the industry. Facebook today uses its relationship with developers, ad targeting capabilities and its significant mobile footprint to get users clicking on its app install ads.

Unlike earlier app install campaigns, which attracted low-quality downloads, Facebook’s precise targeting brought app publishers a better subset of users.  And the payout for Facebook has been incredibly lucrative.

Tsu, however, says users should share in ad revenues, since it’s users’ content that helps a network attract advertisers in the first place. Its altruistic-sounding vision references this belief:

Users should be compensated for their likeness, image and content. It’s simple and it’s the right thing to do…We share social revenues with everyone, for any type of content, size of network or level of influence. 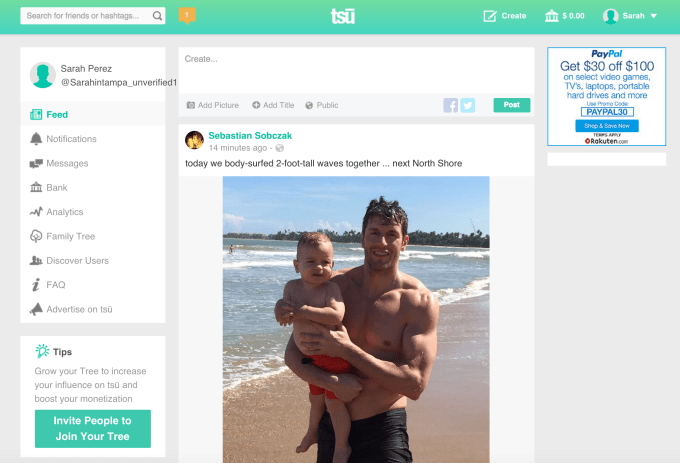 The service’s payment scheme is a bit like an MLM – users are paid based on the engagement they see with their content, and how many new users they recruit.

Today, 10% of the total ad revenue goes to Tsu itself. Half of the remainder goes to Tsu’s content creators (users), and the other half goes to the network that brought in those content creators to the platform. That is, when User A invites User B, and then User B shares popular content, User A is compensated for that. The better a users’ network, or “family tree” in Tsu lingo, the more money you make.

Meanwhile, Tsu places ads around the content, and revenue from those ads accrues into a pool until Tsu distributes that money via its algorithm. (More on Tsu’s advertising scheme is described here.)

Where Tsu differs from your standard pyramid scheme is that the money that’s funneled to users doesn’t come from the suckers on the bottom rungs, but rather from the outside – from Tsu’s advertisers. On the web, Tsu runs display ads. On mobile, it runs app install ads.

Where things get murky is that Tsu users are basically being incentivized to download apps –though not paid directly – and to recruit more people who will do the same.

In short, because the social network’s entire payment scheme is related to the redistribution of ad revenues, Tsu users are more likely to click on its ads. They understand that they’re helping to generate revenues by doing so, and those revenues are ultimately funneled back to their own accounts.

In addition, Tsu is marketing these downloads to a user base who understands that the more people they recruit, the more they get paid. That means more eyeballs for the ads, more clicks, more installs, and ultimately, more payments to users for installing apps.

A quick poke through Tsu’s feed shows that many app publishers have taken the bait. In addition to those mentioned above (Twitter, Lyft, etc.), we’ve seen ads for several games including Game of War – Fire Age, High 5 Casino Slots, Madden NFL Mobile, and Slot Machines*.

One other difference between older pay-per-install campaigns and Tsu’s indirect payment scheme: developers in the past typically rewarded users with virtual currency they could use in their games. Tsu today is paying users in cash.

While’s Tsu’s advertisers are not necessarily acquiring high-quality downloads like those driven by networks like Facebook, incentivized install campaigns were never really about quality, just quantity. Drive enough downloads over a period of time, and those pay-per-install apps become more visible on Apple’s Top Charts.

Tsu, with its millions of users motivated to click app ads for personal gain, today offers a new means for publishers to buy downloads…but without looking like they did.

* Note: We reached out to Tsu’s advertisers for comment, but none have yet to respond. We asked Tsu a number of specific questions related to its revenue scheme, but the company declined to comment.