Despite being on our phones for years, Siri still often gets confused by our questions. Cloe, an SMS-based recommendation engine, adds a human understanding that provides context to our queries. And Cloe co-founder Chase Hildebrand hopes his text-based service will become the better Siri for finding out the best of everything around you.

“When’s the last time you used Siri? You tell her what you are looking for and she either brings up some random list that may or may not relate to what you want or she didn’t understand what you were asking,” he told me over drinks at Nopa in San Francisco’s Lower Haight neighborhood.

Cloe recommended the restaurant and set up the reservation for us last night. She even described Hildebrand, telling me he had blonde hair and would be wearing a gray and green T-shirt, so I would be able to find him in the crowded restaurant. 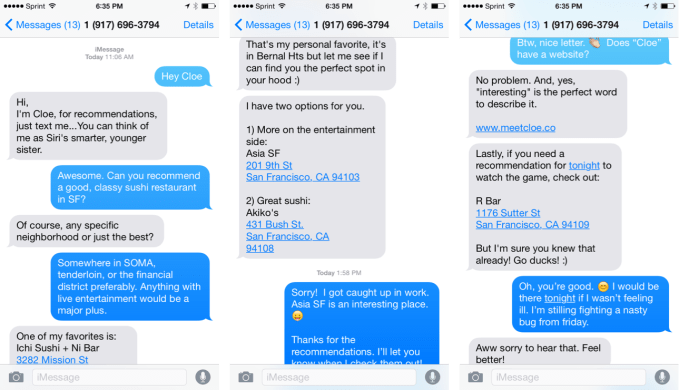 The key to Cloe is the ease of use. You don’t have to download, install or sign up for anything. You just text what you’re looking for and where you’re located and she gives you her best recommendation, from a good burrito, yoga studio or place to get your shoe re-heeled. It’s sort of like the now-defunct ChaCha but for finding good restaurants.

According to Hildebrand the future won’t be defined by apps but experiences. “Everyone has an app. Popeye’s fast food has an app. We don’t need more apps. We need the experience to be seamless,” he says.

While people still use tried-and-true recommendation apps like Yelp and Foursquare, those can be gamed. They also take several steps to download, sign up and set up filters. Cloe just pulls in the information and will even order for you. 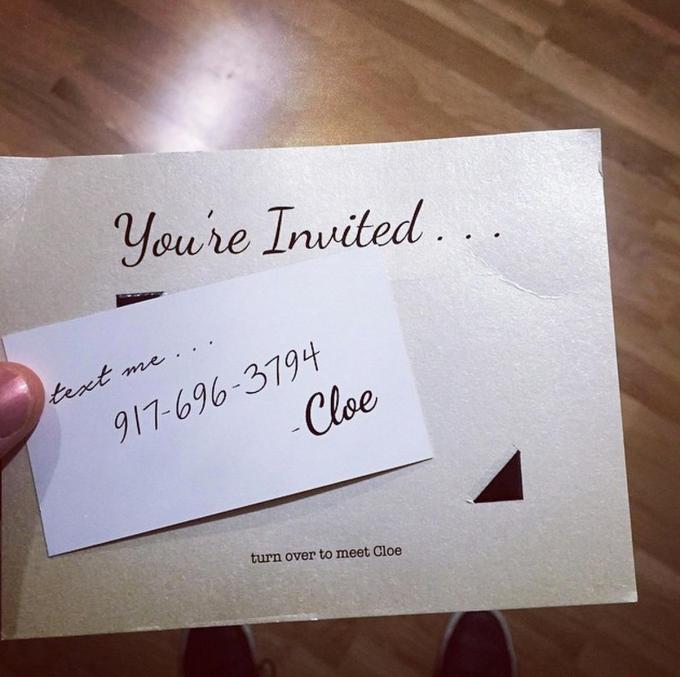 Hildebrand told me that he and co-founder Paige Skinner set up a phone booth on the New York High Line over a year ago to test the service. They invited passersby to try what was then called Clola. Word spread, Clola’s number was shared, and within a week 500 people had used the service more than 7,000 times. That’s when he knew he had something.

He launched Cloe just a couple of days ago to a handful of individuals. Product Hunt’s Ryan Hoover and a few select others got a card in the mail with Cloe’s number. But you probably won’t get in if you try it right now. Hildebrand says he’s been inundated with requests to join and that over 2,000 people are now on the waiting list.

Other services are starting to run on a similar mix of human-powered AI. You can text Ethan for a chat and some life advice. You can schedule meetings by texting Jarvis. The key to these types of services is that although they use artificial intelligence and machine learning to get to know you better and work quickly, they still need humans to operate them.

Using Cloe felt like texting a human the entire time. I asked her if she was human or robot. She said she suffered from an identity crisis. She’s mostly robot, according to Hildebrand, but like a modern plane flight, she needs a pilot to land.

I wasn’t sure how he planned to keep up with the high demand. He tells me he only has a couple Cloes at the moment. While he didn’t want to give away too much of the secret sauce behind how it all works, he claims the current Cloes can handle at least 500 people at a time.

Cloe is a bootstrapped startup at the moment. Hildebrand will most likely be looking for funding soon to help with the demand. “We’re going to need more Cloes,” he says.