Tinder has just closed its first acquisition. The IAC-backed startup has purchased Chill, creators of Tappy, as part of a strategic acquihire. The terms of the deal were not disclosed.

Tappy is a mobile messenger that uses photos and ephemerality to put a new face on text messaging. All messages disappear after 24 hours, and Tappy’s conversations must begin with a photo. From there, you can turn that particular photo into a chat thread, with a single individual or a group. The inbox looks more like a newsfeed than an inbox, with large screen-wide photos acting as the cover art for your various chats. It’s a fast little app, both in messaging and taking pictures, and pulls from some of the best features of Snapchat and Instagram to take a stab at replacing text messaging.

So why would Tinder, who has an extremely similar product in the form of Tinder Moments, spend money on a service that replicates that?

“We’re growing and recruiting like crazy,” said Sean Rad, cofounder and CEO of Tinder. “It’s incredibly difficult to find talented people to join us fast enough to keep up with our roadmap for 2015, which includes some ambitious plans. When I spoke with Brian, we found that our goals for two separate products were such a great match. There are some specific things that they’ve done in the past that we wouldn’t have to figure out on our own moving forward.”

But with growth comes added responsibility to surprise and delight the user.

Tinder Moments is one feature from Tinder where Tappy may be able to lend some extra help. The feature, which sees daily action from more than fifty percent of Tinder’s users, lets people blast all their matches with a photo message. Users can type text over them, add filters, or draw, and then recipients have the option to like the Moment or start a quick chat.

However, Tinder has never allowed users to privately send each other photos through the app. If you want to get your nude pic on, head over to text or Snapchat or whatever else. The acquisition of Tappy might be a step toward product updates that offer direct photo messaging, though that’s just speculation at this point.

“We’re very good at connecting people, but there’s this ‘what happens after that?’ moment that we want to improve,” said Rad. “We not only want to get better at the way we use criteria to connect people, but we want to broaden the reasons for connecting in the first place. The Tappy team will help us tackle both fronts, the pre-match experience of creating that first connection and the post-match experience of communicating with that person.”

Tappy, which received more than $10 million in funding and pivoted out of Chill, will be shut down. Tens of thousands of users on the platform will have to find a new favorite chat app. But at Tinder, there won’t be any competition over energy or resources between two separate products. 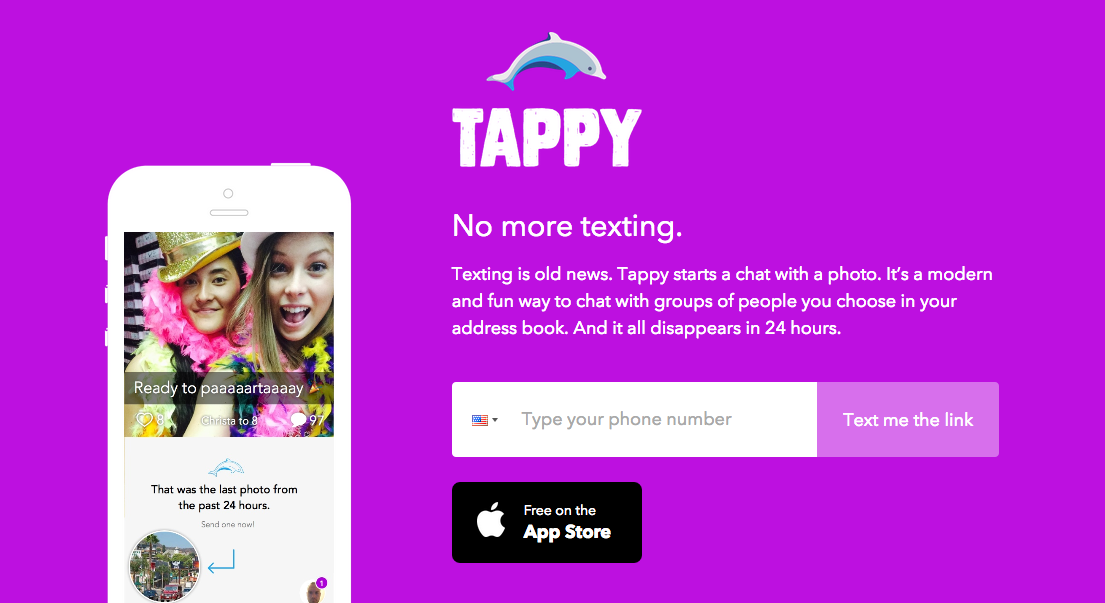 But Tappy is actually pretty quick, and in the limited time I was playing around with the app, I see it as a competitive offering in a saturated messaging market. Why let all that go?

“I’m a bit of a historian when it comes to the internet, and I know that things that grow like Tinder has don’t come around very often,” said Brian Norgard, Tappy co-founder. “The chance to work with Sean was too strong of a draw because we knew that if we could couple Tappy DNA with Tinder DNA that we can do awesome stuff. Messaging has gotten very overheated, and this gives us the chance to lead from the front.”

Tappy co-founders Brian Norgard and Dan Gould have known Rad for years, as they were principal investors in one of Rad’s previous companies, Adly.

For a company focused on romance, Tinder hasn’t been a walk on the beach. It’s been an arduous journey from Hatch Labs startup to household name.

The company was founded in 2012 by Sean Rad while working in the Hatch Labs incubator, funded by IAC and Xtreme Labs. He paired with Joe Munoz for the original project (called MatchBox) and put together a team, which included former CMO and co-founder Justin Mateen, co-founder Jonathan Badeen (who is still at the company), along with now Bumble co-founders Chris Gulzcynski and Whitney Wolfe.

Wolfe and Mateen dated for more than a year while Tinder grew, but it didn’t end well. Wolfe left the company in April of 2014 and went on to file a sexual harassment and sexual discrimination lawsuit against Tinder, Sean Rad, and Justin Mateen, which was settled out of court with no admission of wrong-doing from either party.

Mateen was indefinitely suspended from the company during the lawsuit and eventually resigned entirely.

In September, Tinder participated in a fairly odd exchange, offering Benchmark an equity stake in the company in exchange for Matt Cohler’s experience and guidance. Even with the Benchmark deal, IAC still has a controlling stake in Tinder.

Cohler has taken on a significant advisory role at Tinder, with no financial investment. At the time, Tinder was reported to have a valuation of $750 million.

Since then, Rad is leaving the CEO position (he will remain as President and continue serving as a member of the board).