The New York City Department of Education, the Los Angeles Unified School District and Chicago Public Schools are districts that account for some of the lowest-income and highest diversity populations in the country. Other programs such as Girls Who Code, Black Girls Code and Black Boys Code work towards similar measures to incorporate minorities, but they do so at a smaller scale and through partner organizations rather than through the classroom.

Code.org has reached into the homes of nearly 100 million people, including the White House. The U.S. government acknowledged Code.org’s efforts to reach students with the Hour of Code and President Obama became one of the 60 million to try coding through the program this past year.

Code.org co-founder Hadi Partovi believes working through the public school system, particularly in inner city school districts, is the best way to make an impact on the lack of diversity in computer engineering. “These are not tranquil, upper class suburban areas we’re going into,” he said.

Code Studio is a deeper, 20+ hour coding course that takes students through the basics of how the Internet works to actually creating their own games and apps. Students get training with fun programs like Disney’s Anna and Elsa, Angry Birds and Facebook founder Mark Zuckerberg. 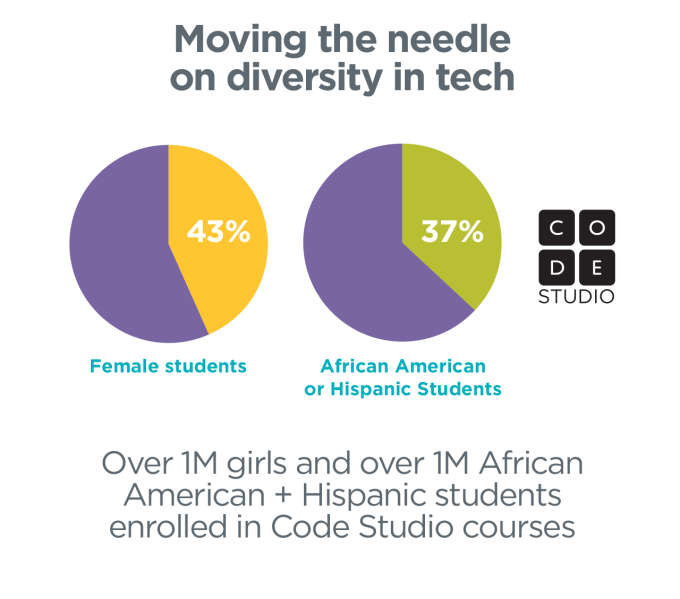 The program reached a milestone training over 1 million girls and 1 million black and Hispanic students recently. While everyone in the program won’t necessarily go on to careers in computer science, Partovi points out that the goal is simply to expose more and younger kids to take away some of the stigma. The average age of those in the program is 12.

About 550,000 women work in the software profession in the U.S. More than half leave at the mid-level point in their career and a quarter of those that leave go into non-technical professions, according to the National Center for Women in Information Technology. Many cite feeling intimidated or alone as reasons for leaving or not continuing on with their education.

While just a few thousand women and minorities graduate in computer science each year, Code.org’s Code Studio breaks down to 15 percent black, 22 percent Hispanic and 43 percent female in current enrollment. The hope, according to Partovi, is to increase those numbers.

“We believe every child deserves to learn the foundational basics of how software and the Internet are changing their world. But we also know that solving the diversity problem in CS education will dramatically address diversity in the tech industry as well,” Code.org’s most recent blog post reads.

A total of 4.26 million students have gone through program so far, most of them in the U.S. Volunteers have translated the program into 34 different languages and there are a few students outside of the U.S. as well.