Snapchat is preparing to launch its biggest “Our Story” feature yet this New Year’s Eve, documenting worldwide celebrations using curated user photos and videos from cities like New York, Dubai, St. Petersburg, Russia and more. The company says it expects to process hundreds of hours of footage to create this New Year’s Eve collaboration, which will be in the live section of the app for just 24 hours before disappearing.

Users will give Snapchat permission to use their content before it appears in the New Year’s Eve “Our Story,” says The New York Times, which was first to report the forthcoming addition to the app that’s been steadily growing in popularity with teens and young adults.

Snapchat doesn’t reveal its internal metrics, but reports have stated that the social app has more than 100 million monthly users – far higher than previous estimates from third-party firms like comScore, which earlier pegged the app as having just 27 million users in June. The app is also reportedly the #3 app among millennials, and has long since passed critical mass among those aged 18 to 24, where it now sees 50% penetration, comScore has said.

Though still best known as being a private mobile messaging app, Snapchat has been expanding its focus into broader social sharing in recent months. This summer, it branched out with the launch of “Our Story,” a new feature which offers a more public way to view content shared across its network. The feature itself was a spinoff from Snapchat “Stories,” which allows individual users to string together a series of snaps from the past 24 hours into one narrative.

At its start, Snapchat tested “Our Story” at a 140,000-person dance music festival in Las Vegas, the Electric Daisy Carnival. 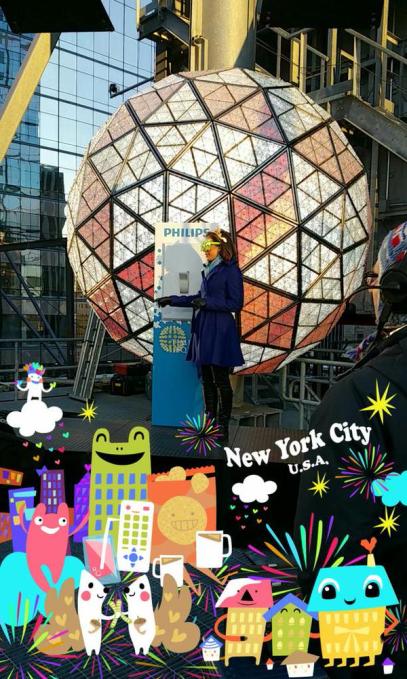 The Stories and Our Story features are now the most popular areas in the application, Snapchat says, telling us that, as of June, users were viewing over a billion stories per day. While Stories have allowed individuals to broadcast their updates to an audience, similar to other social media sites, “Our Story,” is more unique because of its collaborative nature. People can choose to add their content to a story which anyone can view, regardless of whether or not they’re friends with the creator of that content within the app.

Since the launch of “Our Story” at EDC, Snapchat has hosted several of these live, curated, collaborative streams, including one for the Macy’s Thanksgiving Day parade and another for Diwali in India, for example. The idea is to give users a sense of being there, in the moment, as if they were receiving snaps from friends from around the world. And like Snapchat’s snaps themselves, these stories eventually disappear.

The “Our Story” feature can also at least temporarily boost minutes spent in Snapchat, we’ve found. In data provided to us recently by 7Park, during the week when Snapchat celebrated Diwali with an “Our Story” feature, active users in the BRIC region spent 48.36 minutes per week in the app, up from 38.36 minutes the week prior, across 57.59 sessions, up from 47.71 sessions the previous week. (We don’t have Thanksgiving Day numbers to compare, however.)

In addition to being viewable within the app, the upcoming New Year’s Eve story will be shown on multiple video screens across Times Square – a move that elevates Snapchat’s visibility, and exposes its service to many more users who may have not yet signed up for an account.

The “Our Story” taking place tonight doesn’t have an advertiser, but future New Year’s Eve events could have sponsors – something that could help the company, now reportedly valued at $10 billion, generate revenue. Not all of Snapchat’s “Our Story” events have had sponsors before, but the company has experimented with this before for a few events.