More Sony news. In a pre-CES announcement that’s perhaps hoping to draw eyeballs away from the toxic fallout of the Sony Pictures email hack — or, more likely, hoping to suck up a little oxygenated publicity ahead of the consumer electronic scrum in January — Sony has today announced its own take on Google Glass.

Or rather it has detailed a “Compact, Lightweight Single-Lens Display Module with OLED Technology”. So basically a module that clips onto your existing glasses to ‘smartify’ them. (It’s not actually saying smartify, thank goodness.)

Sony says its Glass-esque module, has been designed to clip to glasses of “varying designs” — it goes on to mention “fashionable glasses, goggles, sunglasses, or other type of eyewear” — to augment standard eyewear with a color OLED micro display plus connected camera. 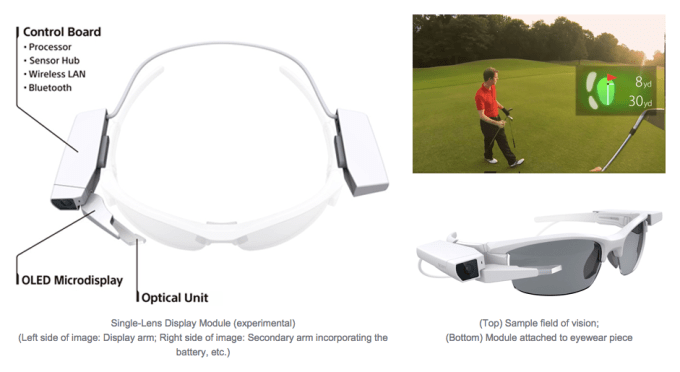 Sony is envisaging the module attaching to various sports use-cases, such as golf, cycling, running or tennis, and also sees potential in the enterprise market — such as being linked to a factory’s internal infrastructure system to deliver hands-free instruction to workers. You could envisage Amazon warehouse pickers being so kitted out — while they wait to replaced by robots.

Sony also says it sees potential for the module to be paired with an action camera to allow the wearer to view remote display or check the angle of view of a captured image from a distance, via their eyewear. That latter scenario sounds pretty fiddle and niche but I guess you never know.

Sony notes the module is lightweight (about 40g) and can be detached when not in use, to aid wearer comfort. And presumably avoid them becoming a social pariah when off the playing field.

At this point it’s fair to say Sony’s module is mostly concept, and certainly not polished consumer product. So definitely file this one under Sony experiments (remember those clip on lens for smartphones, anyone?).

Price tag will be a key detail — there’s no mention of cost as yet, and therein lies the rub. Google Glass has failed to grab mainstream attention and having a high price tag is certainly part of its problem. The other part being the inherent geeky creepiness of sporting a face computer in public. At least Sony’s module can be detached from your specs.

Sony says a prototype of its smart glass module will be on show at CES, under the catchy name of SmartEyeglass Attach!, where the company will be hoping to drum up interest from other device makers.

It notes it is:

…looking to provide the product to a wide variety of potential customers, from eyewear makers whose pieces are tailored for specific uses such as sports or entertainment, to electronics manufacturers who are considering pairing their products with wearable devices, to companies that provide business solutions utilizing wearable devices.

It also says it’s aiming to start mass production of this display module “within the coming year”. So plenty of non-specific vaporware markers here.

The compact display tech is evidently what Sony is most proud of, noting it consists of a 0.23 inch High-Resolution Color OLED Microdisplay, with a resolution of 640 x 400 pixels and the ability to display “rich, vibrant color” — even outdoors in sunny conditions (which would obviously be required to make the sports use-cases fly).

The company also talks generally about the module being a way for it to contribute to the development of the wearables market. And says it will be providing an SDK to partnering organizations to encourage the development of “new commercial solutions” for its Single-Lens Display Module.

In a wearables market report put today, analyst Berg Insight says shipments of connected wearables — which includes smart glasses — reached 19 million in 2014, up from 5.9 million last year, with wearables growing at a compound annual growth rate of 54.7 per cent. The analyst is forecasting shipments will reach 168.2 million units in 2019.

However the analyst does say it sees promising use-cases for smart glasses in specific markets, such as enterprise and medical, as well as in niche segments of the consumer market, and is predicting smart glasses will become the third largest category of connected wearables in the next five years. So perhaps Sony’s experimental clip-on module is onto something.

“The opportunities are plentiful — improved imaging capability together with hands-free operation, real-time communication and augmented reality functionality would for example make smart glasses a serious contender on the action camera market,” said Berg analyst Johan Svanberg in a statement, discussing the potential of smart glasses.

A Glass-style device that can be worn for specific scenarios and then packed up and put away might well feel more appropriate and useful to more people than a Google-branded omnipresent face computer. Time will tell.