Spending time on the Internet, you’re bound to occasionally see comments left from anonymous or semi-anonymous users leaving toxic, vulgar messages that add nothing to the overall discussion.

Whether looking at the comments on a YouTube video or your favorite news blog, you find the same people spewing hate with little thought to how it affects those reading. Hence the trend over the last couple of years: publishers abandoning comment systems in favor of using social media to engage with their audiences, while users everywhere repeat the mantra, “never read the comments.”

That’s actually kind of sad. It would be nice to read an article that makes you feel something and engage with others without worrying that some serial douchebag will come in and troll you for thinking that it would be nice if maybe women were better represented in games.

That line of thinking is what led former Battlefield company Trustev to adapt their fraud detection software to spot and ban repeat trolls on publishers’ sites. According to Trustev CEO Pat Phelan, the idea to adapt their tools for spotting people committing e-commerce fraud came about as the result of the torrent of trollish hate from GamerGate supporters overwhelmed several popular communities a few months back (which continues to this day).

By checking against a variety of factors (summed up in the picture above), Trustev’s tool for publishers can instantly identify so-called “sock puppet” accounts used by serial trolls to attack others without fear of reprisal.

As anyone whose been following the GamerGate debacle can attest, no matter how much you block or mute the worst representatives of that community, there always seem to be more heads to the hydra. On sites like Twitter or Reddit, it’s simply too easy for an individual to abandon an account with a bad reputation for a new one. Phelan tells me that for a few cents per operation, a backend registration system that integrates Trustev’s system will automatically identify and ban those engaging in such behavior.

While this first anti-trolling release is intended for major news sites (it’s controlled via an analytics-like web app), it’s possible for other platforms and publishers to integrate the system as well. The possibility of wider deployment has put trolls on full alert: in the GamerGate community on 8chan (the site GamerGate moved to after 4chan decided they were too awful and permanently banned the topic), there’s currently a discussion thread discussing how to argue against Trustev’s tool on censorship grounds: 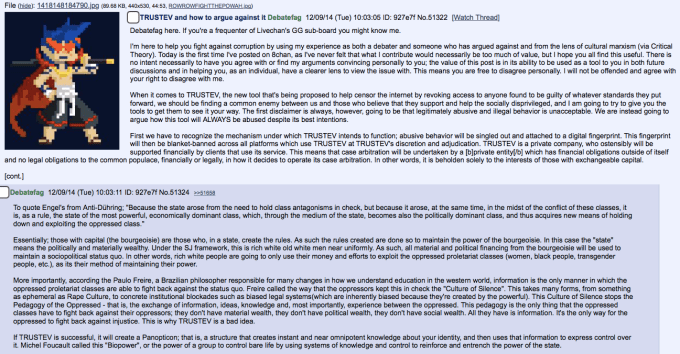