Starting today, Twitter users on iOS and Android devices will be alerted to a change in the type of data the social network is collecting on them, and will be offered the option to opt-out by adjusting their settings. The data in question is a list of the apps you have installed on your mobile device – a collection of data Twitter is calling the “app graph.”

The company says it’s using the app data to help “build a more tailored experience for you on Twitter,” which includes things like improving your “who to follow” recommendations by connecting you with those who have similar interests; showing your relevant promoted content; and adding content to your timeline like tweets and accounts that Twitter thinks you’ll find interesting.

The change comes at a time when Twitter has been working to personalize users’ timelines with better content as it struggles to convert its numerous passive users – meaning, those who don’t sign in, or those who have accounts but rarely tweet – into active, more engaged users. The problem, according to Wall Street at least, is that Twitter’s user growth has been stagnating.

In an effort to correct the problem, Twitter has been testing ways to make its service more usable from the initial sign-in, even if you don’t have a network of friends to follow, or aren’t sure how to get started. For instance, Twitter’s recently added “instant timeline” feature for new users will give people something to see as soon as they sign in for the first time.

Now, with the ability to peer into the apps that are installed on your mobile device, Twitter will also immediately have a better understanding of who a user is, and be able to customize that person’s Twitter timeline with relevant content. That could potentially make for a more compelling Twitter experience, and ultimately draw users back to the network more often, allowing Twitter to grow and retain its user base of signed-in account holders, which translates into an improved bottom line.

However, the “app graph” will serve a secondary purpose as well, a bit further down the road.

It will also improve the interest-based ad targeting capabilities the network currently offers, allowing advertisers to reach very specific “buckets” of users based on a better understanding of what those users like, what apps they have and use, and which games they like to play.

That could mean in the future, Twitter could allow for smarter app recommendations – app install ads, or app engagement ads like those app publishers can run today.

Twitter is able to access this “app graph” data more easily on Android, whose users will start seeing the prompt in a few weeks’ time. On iOS, it’s a bit more difficult but, at a high level, would involve running a check of apps on the device and comparing it to a list of apps Twitter already has. In this scenario, Twitter is not likely to be diving into the long-tail of the million-plus iOS apps in existence, but rather focusing its energies on the those ranked on the top charts across App Store categories. 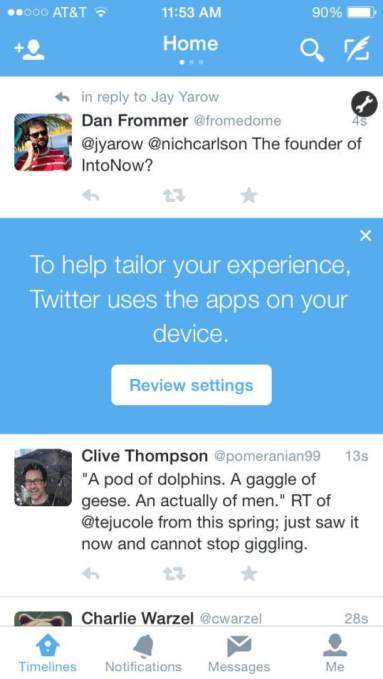 Though some may react to Twitter’s move as being something of an over-reach – after all, it’s scooping up data about things that have nothing to do with your use of Twitter itself – the reality is that many companies do this sort of thing today, they just don’t disclose it to their users. In fact, a number of analytics’ providers’ SDKs, for example, track users across apps where they’re installed, giving the app makers a similar data set in order to identify the “persona” of a user, which in turn allows them to draw broader insights about their own customer base.

Facebook is also able to see which apps users have installed on their phones, if the apps use the Facebook SDK (as many do).

Twitter, meanwhile, is implementing the app tracking data in a way that’s fairly visible – showing a user a large, blue prompt that points users to their settings. It will also honor settings a user previously had configured – including the  “Limit Ad Tracking” on an iOS device or the “Opt out of interest-based ads” on Android. If you already opted out here device-wide, you’ll never see the Twitter prompt. And if you haven’t seen the prompt yet, Twitter isn’t collecting your app data.

That being said, a number of less technically sophisticated users may see the prompt, not understand it, and choose to ignore it. That gives Twitter the ability to begin collecting data, and potentially sets a precedent for other companies who may follow in Twitter’s footsteps one day, opting to do the same.