Uber is adding a new feature to its mobile app that could allow passengers to play DJ while they take a ride with one of its drivers. Thanks to an integration with Spotify, Uber will soon make music a central part of its ride-hailing service.

Some screenshots obtained by TechCrunch show how the service will likely work. In the first screenshot, which began showing up on its driver app over the last few days, Uber has begun asking drivers to update their car information and select whether or not it has an AUX audio input. By connecting their Uber-provided mobile phone to the car stereo, the service could soon allow users to control the music during the ride and possibly play from their own playlists. 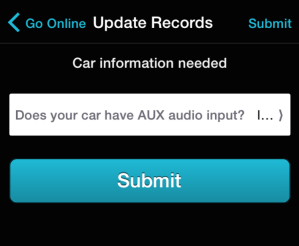 Meanwhile the second screenshot, which a source tells us is hidden within the current version of Uber’s consumer app, shows a mockup of what it will look like for passengers as they select and listen to music while in transit. The user interface shows the song title and artist of the music being played, and enables users to pause, skip, rewind, and choose to shuffle tracks in a playlist.

What’s missing from those screens is the company that will provide the music being pumped into Uber stereos, but we’ve confirmed Spotify will be Uber’s partner for the service.

Today Uber invited press to participate in a global conference call with CEO Travis Kalanick and a “Special Partner Guest” to announce a “first-of-its-kind partnership.” The top of the invite is adorned with a music clef, suggesting that Uber will be announcing the music service Monday morning. 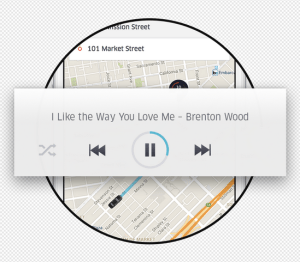 We’ve heard someone from Spotify, which has both the global footprint and user base to make such an integration successful, will be the special guest in question.

Uber will be announcing the new service next week, but it seems the companies could have been experimenting with the idea for some time now. Looking around online, we uncovered a French video posted on Vimeo 10 months ago that appears to describe this service.

Beginning with the logos for both companies, it takes us through a sequence featuring a young guy walking down the road and listening to Spotify on his headphones. He then gets alerted on his phone to meet a friend in a different part of town and orders an Uber (after failing to hail a taxi). Once in the car, he takes off his headphones. The then music seamlessly continues to play inside the car. Both passenger and driver rock out.

More generally, a service integration with Uber would fit with a wider strategic push at Spotify.

The company now has 50 million users of its streaming service, but to make its service more ubiquitous (and more useful) Spotify has been making an effort in the last several months to extend its app to more places outside of its own walled garden. At the same time, it has been curtailing its activity with music apps on its own platform, recently quietly closing down the App Finder in its desktop app.

In-car services have very much been a part of that roadmap: Spotify has made deals to embed its service in connected cars made by Ford and Volvo.

Neither Uber nor Spotify has returned a request for comment.