The ability to predict, detect and warn about an earthquake in time to save lives is in its infancy. But a small startup out of Santa Monica is apply modern cloud computing technology to do just that. Early stage earthquake detection startup Early Warning Labs has partnered with the U.S. Government to build QuakeAlert, a system that can warn California residents that an earthquake is about to happen 30 seconds ahead of time. 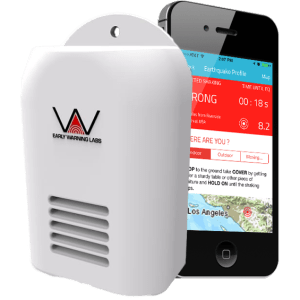 This could be pretty useful for the Golden state, where faults run up and down the entire coast and earthquakes are common. Most of the quakes aren’t really much to write home about, but you never know when a big one will hit and do some real damage. According to the California Geological Survey, a total of six 7.0 or greater magnitude earthquakes have hit the California coast in the last 100 years. But even small earthquakes cause billions in damage every year and threaten lives.

While 30 seconds doesn’t seem like much, founder of EWL, Josh Bashioum says that is enough time to take shelter and save lives. There were 13,000. earthquakes in 2011, 347 in the 4.0-4.9 range and didn’t cause any estimated deaths. However, a shake of magnitude 7.0 could have majorly devastating effects. That could happen at any time. For Bashioum, the best way to get the word out would be via an early warning on a smartphone.

Twitter came out with a video to show it could warn people about earthquakes before they hit, but this would only with user input and is not based on seismographic or other data. It also means you’d have to be on Twitter at the time to get the warning.

The state of California and the USGS had previously partnered with CalTech on a similar idea in 2012 called ShakeAlert. This was basically a demo that used the California Integrated Seismic Network (CISN) to create a warning system for the West Coast of the United States. The idea was to use this network of about 400 ground motion sensors to replace an older detection system that simply let us know there were seismic tremblings after the fact. But ShakeAlert requires the use of the physical hardware from the network in order to send out a warning signal.

EWL co-founder Josh Bashioum explained that QuakeAlert doesn’t require hardware. Instead it connects to a cloud-based system to send warnings via an app to your smartphone. It can also be programmed to connect to other systems such as the speaker system at a large concert venue or to a hospital system so that it automatically switches to emergency power to protect patients.

EWL is now working with the USGS, ESRI GIS, universities and private institutions to build on top of what ShakeAlert has been doing and offer a system that can send signals digitally to anyone with the app. This would be the first time anyone would be warned that an earthquake is coming a few seconds to minutes ahead of time from a message on their phone.

While the app doesn’t require hardware, there is a physical detection and warning device being developed. Bashioum wants you to think about it like a “Nest Thermostat for earthquake warnings.” His team is working with the USGS to install and test those devices in California in order for EWL and the USGS to demonstrate its findings in real-life scenarios. EWL has already been working with NBC Universal in L.A. to do just that.

Bashioum estimates that the accompanying home/office device will be about $100 when it hits the consumer market. The QuakeAlert app, which does not require the hardware, will be free.