The successful launches of the iPhone 6 and iPhone 6 Plus, along with the release of Apple’s new mobile operating system iOS 8 have impacted the marketing costs associated with gathering downloads for mobile applications, and retaining regular users. According to a new report out this morning from app marketing technology provider Fiksu, the costs associated with retaining a “loyal user” – that is, someone who opens an app three times or more – is now at an all-time high, as of September.

This metric increased by 21% in September, rising up to $2.25 from August’s $1.86. Year-over-year, the figure has risen by 34% – and keep in mind, we haven’t even entered into the holiday season yet. That’s typically the most expensive time of the year to market apps, given that many consumers are getting new devices as holiday gifts and are heading to the App Stores to fill their phones with copies of their favorite applications and games alongside new ones. 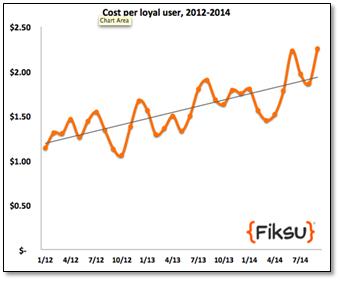 But the launches of the iPhone 6 and 6 Plus have sent an influx of new users into the App Stores and into other app marketing channels ahead of the holidays, shooting costs upwards.

According to Fiksu’s data, adoption of the iPhone 6 was 116% higher than that of the iPhone 5 in the first 30 days after launch. The new users who came along for the ride are enthusiastic about downloading and engaging with new mobile applications, heating up the competition among app marketers.

Fiksu also found that the Cost per Launch Index, which tracks the costs of each repeat app launch over time, increased on iOS to $0.29 – a 36% rise month-over-month, and a 48% increase year-over-year. Meanwhile, the Cost per Install Index, which measures the costs associated with getting an app installed on a user’s device via advertising, increased 6% to $1.23 in September, a 41% increase year-over-year.

Also interesting: some of these costs increased not only because of the new iPhones and new mobile operating system’s release, but also because installing iOS 8 required users to free up a lot of space on their phones in order to update the OS over-the-air. (That is, not tethered to a computer and installing via iTunes.) So users freed up space by deleting their apps, making the already buzzy app marketing environment associated with the new phones and new OS’s launch even more competitive, as app makers found their users disappearing in droves, forcing them to increase their efforts at finding and retaining new users.

In September, the aggregate volume of downloads per day achieved by the top 200 free iPhone apps in the U.S. increased 4% from August to 5.5 million. However, this metric – Fiksu’s Competitive Index – is down by 4% year-over-year – which the firm also contributes to users deleting apps to free up storage space, as well as Apple’s move to reduce the Top Charts in the App Store from 300 down to 150 apps. That means some of the top apps in Fiksu’s index are no longer scrollable in the top apps listings.