Twitter’s native application for OS X users has just been updated with a small handful of photo-sharing features and other improvements that bring the desktop application more in line with what’s available on the web and on mobile. Most notably, the app now supports the ability to tweet out multiple photos in one update, where before it was limited to just one.

The ability to share multiple photos was first introduced in March, and, frankly, it’s been a little frustrating for Twitter for Mac users to have to leave their preferred application to do something as simple as posting a few more pictures. The end result, likely, is that people didn’t bother. That now changes.

As on other platforms, Twitter for Mac only supports sharing up to 4 photos at a time – a seemingly artificial limit that doesn’t always make sense. For instance, I recently tweeted out the onboarding screens for Gmail (because hey, it’s not every day you get to see what a new Gmail user sees!), but found that I had to drop an image or two from the series I wanted to share.

You’ll also be able to click each image preview in order to view the full photo, the app update’s text informs us. 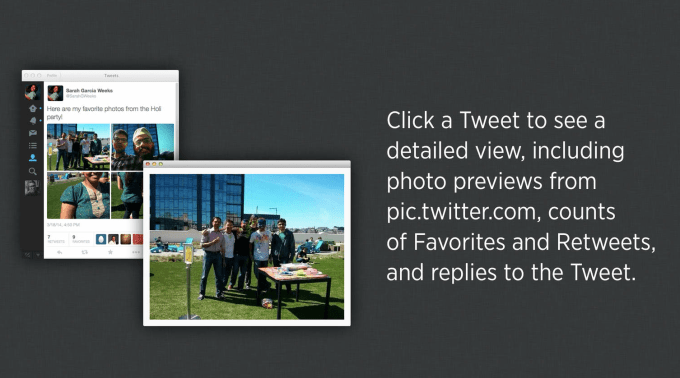 In addition to the multi-photo posting option, Twitter for Mac users can now share photos privately in Messages, too. That’s another feature that arrived quite some time ago for web and mobile users – in fact, it first rolled out late last year.

Beyond those two key upgrades, the rest of the update appears to include the usual “bug fixes and performance improvements.” I hope this means I’ll stop seeing the spinning color wheel of death on occasion, when trying to use features like block and report spam.

We’ll also be checking to see if anything else interesting flew in under the radar, but for now the app is a free upgrade on the Mac App Store.