Apple will discontinue the streaming music service Beats Music it acquired in May, according to five sources, including several prominent employees at Apple and Beats. Many engineers from Beats Music have already been moved off the product and onto other projects at Apple, including iTunes. It’s not clear when exactly Jimmy Iovine and Dr Dre’s music service will be shut down or what Apple will do with streaming, but every source with knowledge of the situation that we talked to agreed Apple plans to sunset the Beats Music brand.

[Update: Apple has told TechCrunch that our report of Beats being shut down “is not true”, but sources familiar with the situation tell Re/code that Apple “may, however, modify [Beats Music] over time, and one of those changes could involved changing the Beats Music brand.” This aligns with what my sources said, which is that the Beats Music brand will be shut down, but that it’s unclear what Apple wants to do in streaming music. It seems quite possible that the Beats Music product could be rolled into iTunes rather than being ‘shuttered’, but that’s semantics.

Apple’s response really depends on the interpretation of “shut down”. If Apple rolls Beats Music into iTunes and removes the dedicated Beats Music app from the App Store, I would call that being shut down. Beats Music itself came from a “rebranding” aka shutdown of the MOG music streaming service it acquired. We’ll see what happens if and when Apple adds streaming to iTunes, but its doubtful that Apple will maintain Beats Music as its own brand and independent product.]

The fact that the new iPhones did not come pre-installed with Beats Music, while several other Apple apps came loaded on the 6 and 6 Plus, should have been a red flag. There was also nothing said about Beats Music during the Apple Watch reveal, even though the service’s radio and fire-and-forget playlists could work well on a wearable. In August, Beats Music was being advertised to new users on iOS 7, yet the only time Beats Music got an off-hand mention at the September launch event was when Apple CEO Tim Cook said the new U2 album would be available there.

Instead of Beats Music, the Apple Watch features a [Update: Remote app] with a blue play button (top right in the photo below) that instantly started playing songs when tapped during a demo. 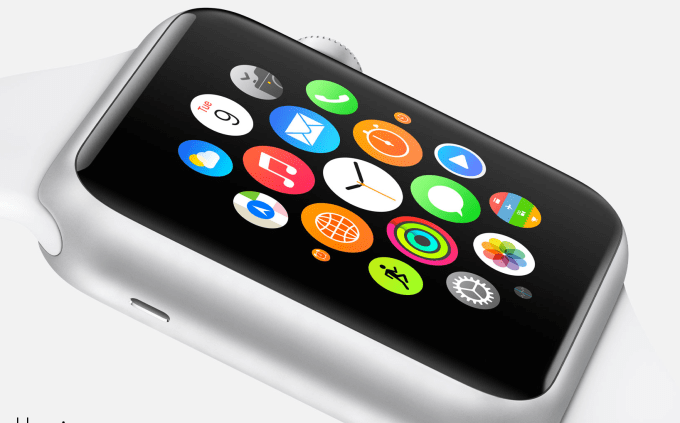 Considering Apple’s penchant for simple, unified brands, and how it despises fragmentation, shutting down Beats Music makes a lot of sense. Running a second music service in parallel with iTunes that forces people to learn a whole new interface might have confused customers. Beats Music’s CEO Ian Rogers was also put in charge of iTunes Radio, meaning he’s already splitting his time rather than just focusing on Beats Music.

Shutting down Beats Music also meshes with reports that the Beats acquisition was mostly about getting Jimmy Iovine and Dr. Dre’s talent on board, and picking up the headphone business, not about streaming music. Having Beats as a side brand in music accessories flows naturally, but seems clumsy when it comes to software. We’ve contacted Apple with a request for comment on its plans for Beat Music. [Update: Response in update above.] Beats has recently launched an Apple TV channel and released a “Listen Now” integration with Shazam, but both seem like they could have been in the pipeline directly. One Beats Music employee told me some teams on the non-technical side have been told to keep up “business as usual.” 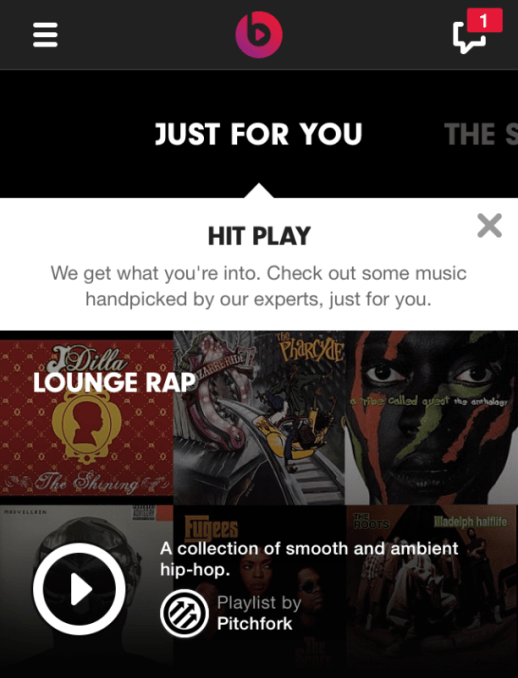 The move will let Apple focus on its flagship music product with its enormous 800 million user base and treasure trove of over 400 million stored credit cards.

Beats Music’s growth has likely been hampered by its late start compared to competitors like Spotify, Rdio, Google Music, and Pandora. Though its strategy was to differentiate itself through curated playlists and mood-based radio, those failed to capture the attention of mainstream listeners. Thanks to seven-day free trials and multi-month demos through AT&T, 5 million people had tried Beats by May, but only 250,000 had signed up for a paid subscription. That’s pretty small compared to the 10 million paid subscribers and 40 million total listeners on Spotify, and 76.4 million active listeners on Pandora. Yet stacked up against the iTunes userbase, Beats Music is just a drop in the bucket for Apple. Apple certainly didn’t hesitate to shut down music streaming service Lala after acquiring it.

The big question is what will Apple do with streaming music. Buying Beats Music may still assist Apple hear through talent, technology, and industry relationships even without the Beats Music brand.

One source said Apple may roll streaming into iTunes. This could be the most logical strategy for Apple if it can find a way to keep its traditional music file download customers happy while opening its catalogue to streaming for early adopters who want to listen from the cloud. Perhaps rather than just buy buttons, there could be play buttons in iTunes, too. Another source said Apple plans to make some significant music announcement in the first half of next year. 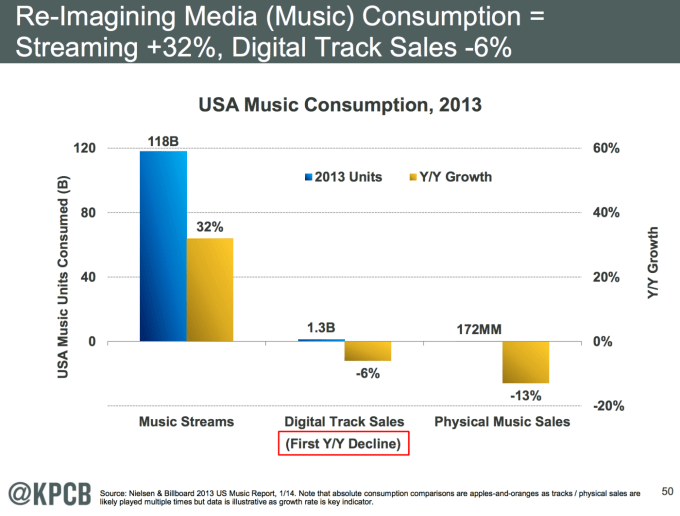 Apple is in the tricky position of trying to smoothly transition its music business from the download to the streaming era. Digital music sales fell 13.3 percent in 2013, while U.S. streaming grew 32 percent. With streaming eating downloads, Apple will have to make a shift or at least accomodate streaming. But it doesn’t just want to ditch sales overnight. 1.26 billion songs and 117.6 million albums were sold online in 2013, providing vital capital to the music industry.

Forcing users across the chasm from iTunes to Beats Music seems precarious, especially with on-demand streaming competitors like Spotify and Google Music looking to pounce on potential customers. It’s doubtful that Apple would abandon its iTunes brand after 13 years of success just because Beats joined the family. Evolving a unified Apple music service sounds a lot better than having two playing out of sync.