Twilio, the San Francisco-based company that currently works with around half a million developers to integrate text messaging, voice and VoIP services into their apps by way of a set of simple APIs, is today adding a new feature into its artillery that taps into some of the most popular uses for smartphones today. It is launching MMS picture messaging. Twilio MMS will work on all standard phone numbers across the U.S. and Canada, with prices starting at $0.01 per message to receive and $0.02 to send — and going down based on volume.

Jeff Lawson, Twilio’s CEO, says picture messaging services are the company’s “number-one requested feature”, and he tells me the plan will be to add more features and geographies to this over time.

“The history of Twilio is launching domestically and then bringing services worldwide, as we have done with SMS,” he says. “We look forward to doing the same thing here. The goal is to expand this worldwide.”

On the subject of integrating the service with other apps — for example messaging to users in apps like Facebook or Snapchat — he says the company “doesn’t have anything to announce today [but] I think we’ll see a lot of conduits connecting Instagram and Snapchat.”

For now, the use cases are varied but one interesting one flagged by Lawson to me was in the realm of marketing, or soft-sales: Nordstrom, he says, has a policy of giving sales associates mobile phones to help communicate with their top clients. The idea here is that these employees can now take pictures of interesting items that have come into the store, and instead of sending MMS messages of these pieces using their own direct numbers to share them, they can use their work numbers, provided by Twilio. 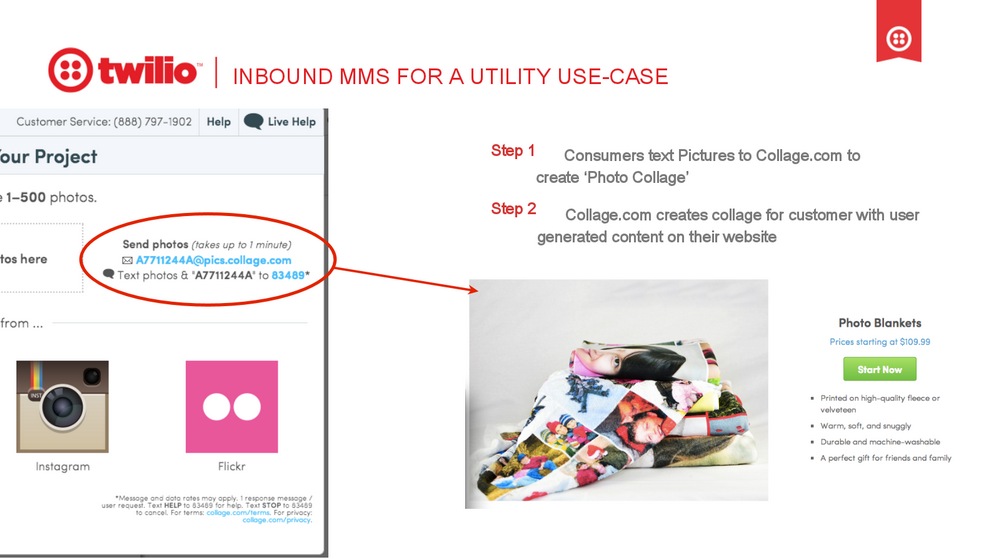 Another could see customers contacting companies by way of their apps to send pictures of broken products to get refunds or for technical help.

For those of you who are familiar with Twilio and use its APIs, you may recall that this is not the company’s first MMS announcement.

Last year the company made its first foray into MMS picture messaging. However, this was only short codes — the ones that cost tens of thousands of dollars and take weeks to acquire. Today’s new MMS service on standard phone numbers, so you can get a number for $1 per month and send your first message for 2 cents.

“SMS has been declining in recent years, but MMS is growing 50% year over year,” Lawson says. “The engagement rate on MMS is eight times that of SMS so it’s a very rich medium. It’s a no brainer that the proliferation of services around rich content is exploding, and I think part of the reason why you see all this is because you can build applications that use photos as with MMS.

Twilio last year raised a huge $70 million round, but Lawson is remaining mum on whether it’s any closer to an IPO at this point.

“We’re heads down executing every day. One of the things you can do is choose to go public as another source of funding. That may be a step we take but we don’t have a date now, ” he says. He’s silent, too, on the company’s current revenue. “What I can say is that we’re very happy with the business and growth and how we are building it. Currently we are not in the market for any fundraising and everything is growing very nicely and we are happy as it is.”