One of the big promises of a smart-glasses approach to wearable tech was always augmented reality. Context-specific augmented reality was the most interesting though — meaning that the AR content was actually overlaid on the object you were looking at directly and not up in the corner of your eye so you had to look away like in Google Glass. That was the direction I thought it was all heading back in 2011. Google Glass seemed to be a move away from that.

Looking at the many new products out there like Meta SpaceGlasses and now Epson’s Moverio BT-200, I think we are back on track.

In fact, today, Epson announced that their new Moverio BT-200 glasses are now shipping for $699. Instead of having a small screen you look at for content like Google Glass, these glasses project content up onto the see-through lenses so they are inline with the real world you are viewing.

What interests me most though is that Epson has partnered with AR firm Metaio and utilized their superior Augmented Reality SDK, bringing the BT-200 closer to the concept I mentioned above. 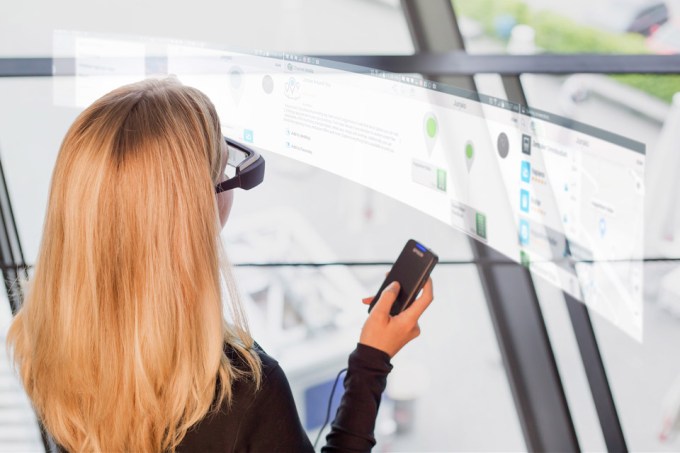 Now, I wouldn’t bust these out for your next cocktail party just yet. In terms of style, they have a long way to go (something Google had a clear vision for and that planning obviously helped win the minds of consumers and the media). Additionally, remember that this version actually has an external companion touchpad device and battery that is attached by wires to the glasses.

But because of this approach, these glasses have some clear advantages like longer battery life and heat reduction. Metaio, which has been pretty early to AR software market for wearables (and already developed software for Google Glass), capitalized on the hardware advantages of the Epson glasses. The longer battery life allows Metaio’s software to work longer and harder to show more complex content. Typically, the processing power it takes to do AR on Google Glass can empty those smaller batteries in about 15 minutes. The full-field transparent form factor is really what lets the software work optimally though, offering the best UX.

While the glasses aren’t the most stylish thing you’ve ever seen, Epson isn’t necessarily going after the consumers in the first iteration. They are first targeting the business and manufacturing world and then rolling the tech out to future AR hobbyists and designers. It’s a fascinating move away from the “heads-up display” style of AR interaction.