A 6’2″, sandy blond gentleman wearing a tailored suit and tie gently bows to greet me and seat me. “Hello, I am Fabio and I will be your man servant this afternoon,” he says. His gentle, hypnotic voice wraps around me. I suddenly realize I’ve been seated and proceed to accidentally knock my sunglasses off the table. Fabio quickly picks them up and then takes out a hand fan to cool me off in the hot afternoon sun. “Fetch me some water?” I ask, getting my bearings. “As you wish,” Fabio replies with a slight smirk.

I’m out on the patio at The Grove in San Francisco’s SoMa with the two young women who started ManServants, a newly launched startup that lets you hire good-looking young men to do your bidding. Fabio is now holding an umbrella above our heads to shade us as we chat.

The scene seems to have made an impression on a man sitting a few tables down. “Excuse me, what is this?” he asks, pointing to Fabio. “Is he for real?” The ladies giggle and say he is. The man then asks if Fabio is for hire. They tell him that he will do whatever you want, within reason, for $125 per hour. The man grins, writes down the name of their startup and trots off.

The idea started back when co-founders Josephine Wai Lin and Dalal Khajah were working at advertising agency AKQA. “We hired men to act as body guards for our bosses as a joke,” Khajah tells me. “One guy was actually a male stripper but we wanted him to just pretend he was fending them off from the paparazzi. We told him we didn’t want him to take his clothes off. He was so confused,” she laughs. They did this a couple of times with male body guards and then started hiring men for their friends’ parties. Their friends loved it so much, and founders realized they were onto something. ManServants was born.

Each guy they hire must be extremely handsome and at least six feet tall. Oh, and you get to name them. They asked me what I wanted to name my man before our meeting. I chose Fabio for silliness but now think I maybe should have named him Ryan Gosling. That’s a favorite among ManServants customers.

The men do things like serenade you with Disney songs, paint your toenails, take Instagrams of you and your friends, throw doves out when you arrive, fill up your glass of champagne, or act as a general bodyguard against pretend paparazzi. “Some women even want to be proposed to over and over in public,” says Wai Lin. Women have fantasies about the opposite gender just like men do. Though she also adds that men hire the men servants, too. A couple hired a whole flock of them to stand there and look pretty during a gay wedding a couple of weeks back.

ManServants released a pretty hilarious video that went viral in July to gear up for the launch.

“In the beginning,” the video’s voiceover says in a British accent, “there were strippers. Men’s idea of a pleasurable pastime… but ladies, who’s idea of sexy is this?” A male stripper thrusts himself on top of a very uncomfortable-looking birthday girl.

The video was so over-the-top when it first came out that I thought it was a joke. It wasn’t until my friend’s little brother actually told me he’d answered a Craigslist ad to try out to be a ManServant that I realized the startup was an actual thing.

“Isn’t this kind of objectifying men?” I ask the founders. It seemed ironic that I was asking this right in front of Fabio, as if he weren’t there. Fabio fanned on. “Ugh, there are all sorts of services that objectify women like strippers and that topless maid service. It’s time women had something, too. There’s too much for men and no one really thinks about what women want,” Wai Lin points out.

She adds that male strippers are not really the same for women as female strippers. She says male strippers are more of a joke and, according to her, a lot of other women don’t want a guy shoving his junk in their faces. They want to be catered to and pampered. The founders are both quick to add that, lest anyone gets the wrong idea on what this is, no sex is involved here, either. “It’s not about domination of the guy but adoration of the girl,” Khajah points out. “The man is not a slave but a subject to the queen,” she says.

But surely someone might get the wrong idea? I press them to tell me if the men are ever hired to perform sexual acts. “Absolutely not,” says Khajah, waving her hands. She says the men are trained to deal with aggressive customers who have the wrong idea, too. “Like if someone says ‘I wanna bang you’ the guy pulls out a toy gun with a flag that says ‘bang,'” she tells me.

You are also not allowed to know the real identity of the man servant. I try to ask Fabio what he does outside of holding umbrellas up in the sun. He looks ready to say something but is quickly shut down by Khajah. “No, no, he can’t tell you,” she says, shaking her head. She tells me this is the equivalent of emotional stripping for the guy. “Women can sometimes get hung up on one of our guys so we have to protect the men,” Wai Lin chimes in.

Khajah rolls her eyes, “We all know that girl, we’ll call her Karen, that just doesn’t get it. This is about catering to you and it’s a fantasy so it blows the fantasy if you know the real them.” None of the guys are allowed to be alone with a customer and all sessions must end before six hours to help customers avoid getting attached. The men get dressing lessons and tips on how to cater to the women as well. 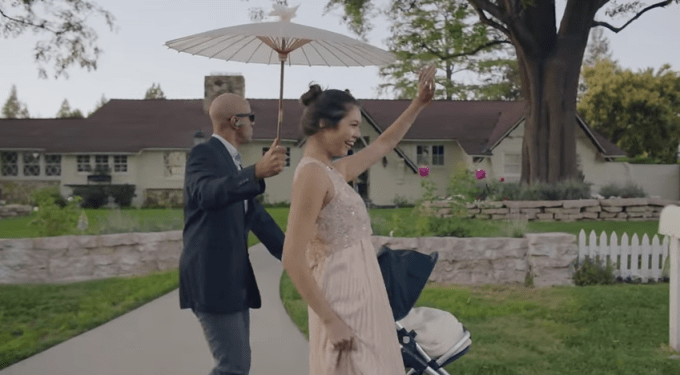 The founders are busy expanding their business beyond the borders of San Francisco. They’re also in the middle of raising a seed round of funding and building an iOS app akin to Tinder. Soon you’ll be able to go through and order a man servant to your liking with just the touch of a button on your phone. There are currently 12 men on staff and the co-founders are looking for more to join. Mai Lin, Khajah and their office manager Annie Pariseau will be at The Annex Studios in SF this Saturday afternoon from noon to 3 p.m. to hold tryouts for any men interested in signing up. Men who look like Ryan Gosling or Wesley from “The Princess Bride” and know Disney songs are in particularly high demand. “No dick pics, please,” says Khajah. “We don’t want to have to walk you through the hall of shame,” she laughs. Apparently this has been a problem with some men trying out from a Craigslist ad in the past.

Fabio helps me up as I leave our meeting. He then comments on my good taste in gold toenail polish. It’s a fresh pedicure. Did he really just notice my pedicure? I’m still not sure if that was a real compliment or all part of the service.