To prove to advertisers and the world that it’s not just YouTube that has massive video engagement online, Facebook today announced it now delivers 1 billion video views per day and will begin showing everyone view counts on publicly posted videos from users, Pages, and public figures. This could convince advertisers shifting TV ad spend to digital to look to Facebook, which recently bought video adtech company LiveRail for between $400 million and $500 million in July.

To put the 1 billion daily views in context, YouTube last said it racked up 4 billion views per day as of early 2012, but it’s grown massively since then. Sixty-five percent of Facebook’s video views are coming from mobile where Facebook’s user base is shifting, and views grew 50 percent from May to July, in part thanks to the viral ALS ice bucket challenge finding a home on Facebook. As I wrote nine months ago, video is a huge growth opportunity for Facebook, and today it finally puts its efforts there in the spotlight.

Facebook today also confirmed that it’s recommending additional videos to watch after you’ve seen one, a new feature I spotted in July. Today’s announcement also noted that Facebook is letting video publishers include a “call-to-action” link that viewers can click at the end of a video. Finally, it noted that video publishers and Pages now have access to previously announced deeper analytics about view counts and unique viewers, as well as how long people kept watching before moving on. 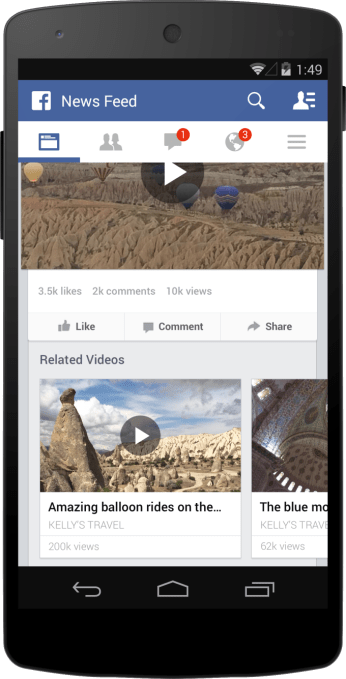 The new video views and analytics could make the impact of Facebook for video marketing more transparent, which could get more advertisers allocating video ad budgets to the service. Meanwhile, the calls to action can help advertisers drive sales or other returns on investment beyond just getting attention.

For users, the view counts shown next to the familiar like and comment counts on videos with the ‘Public’ privacy setting could help make Facebook more of a home for viral videos. When people see high view counts, it can reassure them a video is worth their time. The recommendations could inspire people to watch chains of videos one after another instead of returning to the feed or a friend’s profile.

One thing sadly missing from today’s announcement is a much-needed improvement to the Facebook app’s video upload interface that I’ve been blathering about for a year. It’s absurdly outdated at this point, lacking the tap-and-hold to record, multi-shot videos, filters, or any editing tools. Hopefully some of the video tricks from Instagram and Slingshot will eventually make their way to Facebook’s enormous smartphone user base.

Video holds massive potential for Facebook to both deliver on its mission and build its business. Video is such a compelling way to communicate, and the tools for recording it (like Instagram’s new timelapse app Hyperlapse) keep improving, that the medium could connect people more vividly than the status updates and photos Facebook grew up on. And by combining its vast trove of user-targeting data with the long session times and attention-holding property of moving pictures, Facebook could catch the wave of ad dollars flooding from TV to the Internet.