Google is closing the loop on bringing support for natively editing Microsoft Office files to all of productivity apps today. The company’s iOS apps for Docs and Sheets are getting a couple of minor new features and design updates today, but most importantly, these apps will now also be able to natively open, edit and save files from Microsoft’s Office suite.

After launching the original standalone apps for Google Docs and Sheets on iOS a few months ago, it was only a matter of time before Google would also free its PowerPoint competitor Slides from the Google Drive app. Today is that day. Google Slides is now available as a standalone app for the iPhone, iPad and iPod touch. 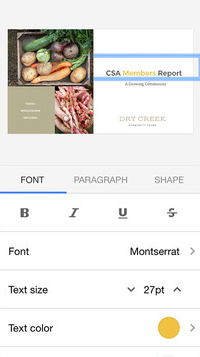 Just like the Docs and Sheets apps and their counterparts on Android (the standalone Slides app launched there two months ago), the new Slides app will feature some aspects of Google’s new Material Design user interface language and all the Microsoft Office conversion goodness the company acquired when it bought Quickoffice in 2012.

With this, Google now offers its full suite of productivity apps on all of its major platforms, including Android, iOS, Chrome OS and the web (it’s unlikely Google will ever launch a Metro app for Windows, though.)

Google is clearly positioning its apps as a more affordable solutions for companies that need to occasionally edit Office files. As Google notes, according to Softwatch, 80 percent of Office licenses “are only lightly used.” Those users who only need to make an occasional edit to a native Office document are probably better served with using the Google Drive productivity apps instead of buying a license, Google says.

Microsoft obviously launched Office for iOS earlier this year. To fully make use of those apps, however, users need a subscription to Office 365. Google’s apps are available for free, though business users are likely already paying for a Google Apps for Business account anyway.

You can now download the new Slides app for iOS here and chances are you will be prompted to download it from the Google Drive app, too.