Nearly a year after the launch of Glow, the fertility tracking company that helps or hinders pregnancy, is launching a new app on iOS today. Glow Nurture is the company’s second offering, this time to help women who are already with child. I was able to sit down with Glow CEO Mike Huang to get a first peek of the app. You can see that interview in our TechCrunch TV studio in the video below.

Think of this app as kind of a “What to Expect When You’re Expecting” but on your iPhone. Glow Nurture is quite similar in design to the original Glow app but is specifically created as a guide and social community for those in the middle of the baby growing process. Huang tells me the creation of the app is in response to Glow users who were staying on in the Glow community after they’d already conceived. “We just got tons of feedback everyday asking ‘now that I’m pregnant, what do I do?’.” According to Huang and others from the team, this was the number one request.

There are four components to Glow Nurture: 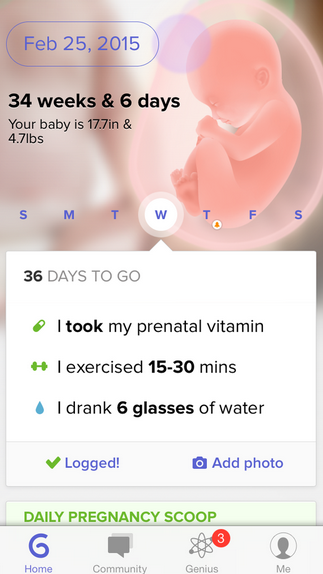 The Glow team’s goal is to graduate those who’ve been able to conceive using the original Glow app to Glow Nurture. Huang says over 20,000 couples have been able to conceive so far on the app. Current Glow users will be able to seamlessly transition their data into Glow Nurture as soon as they download the new app on their phone. New users just need to create an account.

While Huang was careful to point out to me that the app is not about handing out medical advice, he did say an app like this could provide reassurance and a supportive digital community during the nine month process. It also could alert a woman when something isn’t quite right and urge her to get it checked out.

Glow Nurture is available for free in the App Store starting today. Glow is in the middle of creating an Android version of the app as well. The company also has plans to add an app that deals with the nine months after pregnancy.