Online fashion marketplace Twice, which buys gently worn, quality women’s clothing from consumers then resells it via its own website, mobile and tablet applications, is today expanding into the offline world with the launch of a new service called Twice Local.

Following a similar trend among “push button services” that allow you to call up everything from black cars to errand runners on demand, Twice Local sends someone to your home or workplace to pick up any garments you want to sell.

The company, which competes to some extent with other online consignment shops and peer-to-peer marketplaces, including thredUP, Poshmark, Threadflip and others, typically sends its sellers a postage-paid bag which they load up with garments and ship back. Those garments are then analyzed at Twice’s San Francisco-based warehouse, and the customer is sent an offer from Twice for those clothes that they can choose to accept (98 percent do, says CEO Noah Ready-Campbell).

On average, sellers send in 15 garments, with maybe a dozen accepted for a payout of around $60. Most garments are basics, like a top that goes for $2 to $5, for example, but Twice has paid out as high as $100 for designer items.

The mail-in service is easy to use but, explains Twice Director of Marketing Chris Luhur, who’s leading the new Local program, “sometimes I find it hard to even make it to the mailbox.”

Twice Local, she says, aims to make it even easier for people to try Twice without needing to first request a bag, stuff it and ship it back. And it’s especially convenient for people who have large amounts of clothing to sell, she notes. “People just hand us a pile of clothes – it’s very convenient.”

The company, which recently raised $18.5 million in Series B funding led by Jeff Jordan of Andreessen Horowitz, moved into its new warehouse in San Francisco’s Mission district this April. It’s from these headquarters that Twice Local will initially get off the ground. The company will pick up items from a 25-mile radius from San Francisco, we’re told. 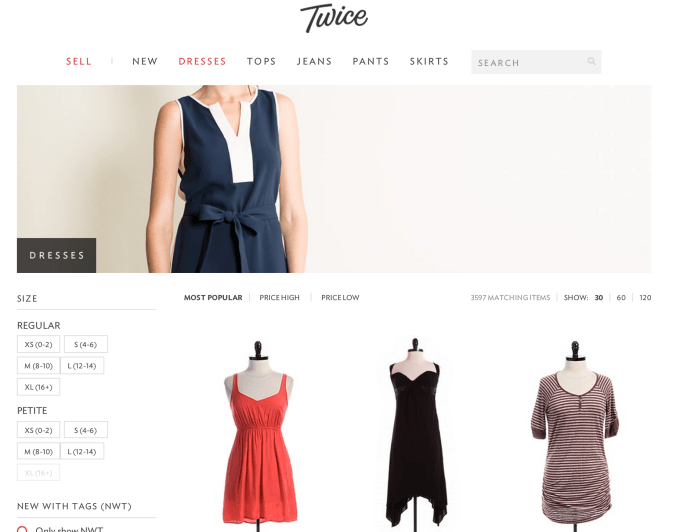 Today, 10 of Twice’s now 200 employees (!!!) have been trained on Twice Local, but Ready-Campbell says the company is prepared to quickly scale that number if need be thanks to its large staff.

And San Francisco is only the beginning. Twice plans to bring its Local service to other metro areas soon, starting with L.A. The plan is to regroup a month after today’s debut, then firm up plans for its next market’s launch. Twice already has a heavier concentration of users in a number of metro areas around the U.S., including also New York, Chicago, parts of Texas, and, of course, many cities in California.

The bigger goal with Twice Local, beyond the convenience factor, is to help the company expand its inventory, says Ready-Campbell. Twice currently has over 50,000 items from over 400 brands. “This facility we have…should give us room to grow to over 100,000 SKUs, and that’s our game plan over the next 6 to 12 months,” he says.

To get started with Twice Local, customers will need to schedule their pickups from the website (mobile app support is in the works) for same-day pickup up to two weeks in advance. And the pickups can be for as little as one item of clothing, the company says.

The move to offer local pickup differentiates Twice from competitors who either rely on consumers selling and shipping items to each other by themselves, or sending in items via the mail. Twice will not only pick up local’s clothing, it will also prioritize getting those items online more quickly.

Now that Twice has staff running all over town, the next obvious question is whether or not the company will launch same-day delivery next.