Google Glass has made a name for itself (somewhat infamously) as head-mounted hardware that you can control with your voice and a sliding finger. Now, a team based out of interactive studio This Place in London, is launching a new app that it hopes will kickstart an even more seamless way of interacting with the device: with the power of your mind.

MindRDR, as the app is called, links up Google Glass with another piece of head-mounted hardware, the Neurosky EEG biosensor, to create a communication loop.

The Neurosky biosensor picks up on brainwaves that correlate to your ability to focus. The app then translates these brainwaves into a meter reading that gets superimposed on the camera view in Google Glass. As you “focus” more with your mind, the meter goes up, and the app takes a photograph of what you are seeing in front of you. Focus some more, and the meter goes up again and the photo gets posted to Twitter. Like this: 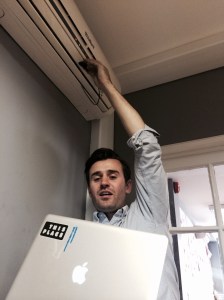 It’s an early, and somewhat primitive vision of how your mind can control Glass.

Yes, there are devices out there that have even more sensors on them, although that can start to get very expensive (the Neurosky retails for £71 in the UK, while Google Glass costs £1,000 and the app is free).

And to be honest, the current hook-up is pretty primitive, too. When I arrived for a demonstration earlier today, one of This Place’s account managers was cooling Glass down under the air conditioner.

And that’s before you start to put on two different bits of headgear. It can be a little clumsy.

But all this isn’t the point: The idea here is that this is a minimum viable product, a first step that can be developed further — for example, to create applications to “train” people to concentrate better, or to play games, maybe to help suggest places to get a coffee when your sensor picks up that you’re tired, or for medical applications, for example for people with mobility problems.

And potentially, you could build out the basic concept with more, lighter and easier-to-use sensors. This Place says that among those who have taken an interest are Stephen Hawking, the famous physicist who is nearly paralysed because of a progressive motor neuron disease.

To that end, while This Place continues its own development, it has also put the code up on GitHub for others to use it and expand on it, as well.

Visiting This Place earlier today for a demonstration, Chloe Kirton, This Place’s creative director who had originally conceived of MindRDR, told me that the idea is somewhat related to the kind of work her colleagues do every day for paying clients.

(MindRDR, to be clear, is not a paid project and was not developed for any client; rather it’s in the vein of other London-based creative agencies like UsTwo, where employees are encouraged to work on creative projects that are completely outside of their day-to-day client work.)

A typical project for This Place, she says, is working on user experience and user interfaces for large Internet properties. “When touchscreens first became mainstream it forced the tech industry to really rethink the user experience,” she says. “Could this become the basis of a new kind of user interface? Could the future be about an interface that disappears altogether?”

Part of the interest, too, came out of Kirton’s awareness of some of Google Glass’s shortcomings.

“We saw the problems,” she says. Speaking out loud to your device is unnatural and could be downright awkward in some cases. And the finger sliding and tapping is not great, either. “After a while your arm gets tired,” she says. “You get Glass elbow. We wanted to think of something that was natural and accessible for everyone.”

Google Glass, for all the glasshole drawbacks, has become a reference point that has inspired some interesting applications and concepts for where wearable technology may take us in the future. That’s included ways to use Glass to pay for things, and how Glass can be used by doctors and other clinicians. Kirton says that MindRDR is so far the only app that links up Google Glass with brainwave-reading technology.

This Place’s video for how it works, including screenshots from inside the app, is below: