New York-based NowThisNews, a startup looking to reinvent video journalism for the mobile and social era, has acquired a company in a similar space, Cliptamatic, a platform which helps premium content owners distribute video to social media in real-time. Terms of the deal were not disclosed but the acquisition was for equity.

Cliptamatic had raised north of $2 million a few years prior.

Cliptamatic CEO Athan Stephanopoulos, and the rest of the small team of under a half-dozen, will now work from NowThisNews’ offices in New York.

One of the startup’s most-high profile customers was AMC Networks, which worked with Cliptamatic to share videos from across AMC’s channel lineup, including AMC, Sundance, IFC, and WE tv. AMC Networks is also home to one of the most “social” shows when it comes to people discussing it on Twitter: AMC’s “The Walking Dead.” 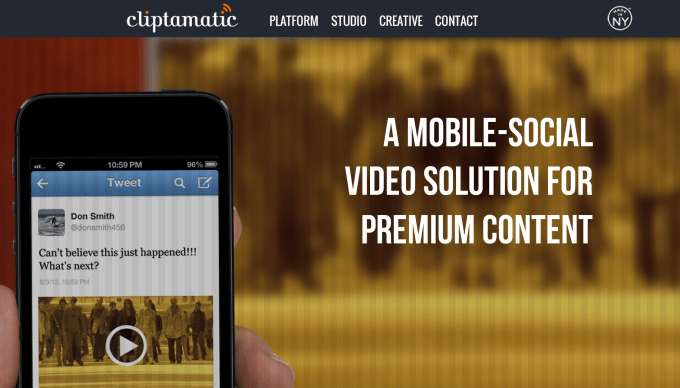 With Cliptamatic’s platform, a content owner has access to a social feed that lets them push out video clips in real-time. This feed can also be dropped into their mobile apps or websites, allowing fans as well as talent (e.g. news anchors, actors, athletes, etc.) to add those videos to their social activities.

Cliptamatic also worked with a few other customers, including FX and ABC News.

Explains NowThisNews president Sean Mills, his company and Cliptamatic were both tackling the “same intersection of mobile and social video.”

“We’ve always felt that the company that’s going to win in that space is going to have DNA that’s not just a content company, and not just a tech company, but both,” he says. With the acquisition, NowThisNews gets Cliptamatic’s technology platform, and also its talented team, he adds.

But the biggest advantage is that the new technology with help NowThisNews do more, faster. One of the challenges they were facing, says Mills, was the friction involved with distributing video out to social networks and then getting good analytics in return. “It was just a very heavy, manual process,” he explains. That initially led NowThisNews to partner with Cliptamatic, but they soon realized that bringing the technology in-house would make even more sense.

The end result, the company hopes, is that they’ll be able to move more quickly, breaking stories – with video – before traditional media is about to get up a photo or article. NowThisNews has already done this before, Mills notes, when they shared video on Twitter related to Donald Sterling being banned for life by the NBA. Their video was being shared for 10 minutes before other news organizations had a photo posted, in some cases, and 60 minutes before competitors were sharing their own videos.

During the transitional period post-acquisition, Cliptamatic will continue to support its current customers, but going forward, the plan is to integrate its technology into a single NowThisNews product.

“There may be new types of relationships that we have, but we’re very focused on one thing which is…becoming a digital newsroom for brands, and this technology gives us a strategic advantage to help us do that,” says Mills.