With the release of OS X Yosemite later this year, Apple will cease the development of its ‘pro’ photo editing app Aperture. Users of that program will be transitioned to Photos, a new app that was introduced during the WWDC keynote and that will be released next year.

Photos integrates many of the advanced photo editing features that were previously found in Aperture and will replace iPhoto on the new OS X as well.

“With the introduction of the new Photos app and iCloud Photo Library, enabling you to safely store all of your photos in iCloud and access them from anywhere, there will be no new development of Aperture,” an Apple spokesperson told TechCrunch. “When Photos for OS X ships next year, users will be able to migrate their existing Aperture libraries to Photos for OS X.”

Apple says that it will provide compatibility updates to Aperture that allow it to run on OS X Yosemite, but will not continue to develop it. Adobe says that it will ‘double down’ on Lightroom support and offer Apple users a way to migrate:

Put simply we’re doubling down on our investments in Lightroom and the new Creative Cloud Photography plan and you can expect to see a rich roadmap of rapid innovation for desktop, web and device workflows in the coming weeks, months and years. We also continue to invest actively on the iOS and OSX platforms, and are committed to helping interested iPhoto and Aperture customers migrate to our rich solution across desktop, device and web workflows.

Here’s a new image of Photos on OS X Yosemite: 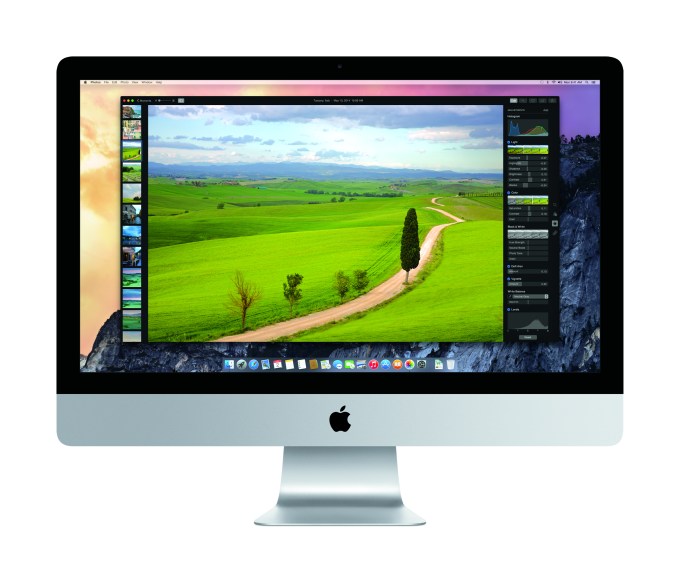 Apple will also provide update paths that help users transition from Aperture and iPhoto to Photos for OS X. This does not, Apple says, signal a move away from servicing pro customers with other apps like Final Cut Pro and Logic, which will stick around.

As a long-time Lightroom user and ex pro photographer, this news doesn’t surprise me in the least. Lightroom did a killer job of siphoning Aperture customers, especially as Aperture endured long periods of languishing without a lot of major updates. Now, Apple is formalizing that shift by unifying its photos apps into one offering. And Photos, unlike Aperture, integrates Apple’s new iCloud Photo Library, which should make things easier for people with multiple Apple devices.

I would also not be surprised if Apple discontinued iPhoto on iOS in favor of one photos app there, as iOS 8 will introduce new editing tools to the stock app. But I have no information on whether that will happen or not; it’s just a hunch.

Article updated to clarify that there is no official workflow for migrating to Lightroom.